OP-ED / MONEY POWER IN A DEMOCRACY

The rich and famous funding elections - why not?

Any election campaign and process needs money, and as long as the exercise of money power is well-regulated, it can never thwart the power of the people, feels P V Rajeev.
13 May 2014 -

In politics, power has two aspects. One is power, which flows from the people and the other is money power. The first of these two is purely democratic and depends on the number of people who support a candidate. The second, which is money power, refers to the power exercised by the wealthy or the business community over the electoral process and its outcome. An industrialist, say Birla, has only one vote and in this respect he is like any other citizen. But he owns tremendous wealth by dint of which he can exercise influence over the electorate by means of his money power. Or so it is feared.

In reality, both these aspects of power in politics should be considered to be legitimate. A democracy ensures equal voting rights for all citizens. An individual citizen has certain interests to be protected and to ensure that, he exercises his vote in an election to choose the government he considers most suitable to govern him.

Are the political needs of all individuals equal? Everyone agrees that there should be a well- paved road in front of his residence. Every citizen would therefore want to vote for a government that will provide good roads. However, it is not as simple as that. As the wealth owned by an individual increases, his stake in the government of the day also increases.

If a rich industrialist wants to influence the corporate tax policy of the government, the few thousand voters belonging to his tribe, each of whom can cast only one vote during elections, cannot be of much help. But he and the people of his tribe enjoy tremendous money power which they can exercise to get a government of their choice elected. Money power can be exercised legitimately through advertisement campaigns, donations to political parties for permissible expenditure on electioneering, and so on.

We can, therefore, conclude that people power as well as money power are both important and legitimate in a democratic election. It would not be proper to conclude that the latter is necessarily evil. Each has its own role to play. What is, however, important is that money power be regulated and properly channelised.

A political party that supports the business community may get substantial election funding from this community. But it does not mean that this party will win the elections because it may fail to win the support of people power. The Aam Aadmi Party (AAP) won a large number of seats in the Delhi Assembly elections, not because it favoured the rich and secured their funding, but by promising low tariffs for electricity and water.

Ideally, there should be free play of both people power as well as money power in the electoral process. However, suitable limits should be imposed on the amount a candidate or a political party can spend on electioneering in a single constituency. At present, there are only limits on what individual candidates can spend and no limit on what political parties can spend. Limits have been imposed on the amount a particular candidate can spend in his constituency at the time of elections, but there are no limits on total expenditure by a political party which makes the former limit meaningless in practice.

It is often apprehended that a party which is the darling of industry may corner all the money power and thus have an advantage in elections. It is also being argued that this has indeed happened in this year’s elections. But if it is really so, it actually happened only because there is no limit on the amount a political party can spend in elections.

The present limit on the amount that a candidate spends on electioneering in his constituency from his own account should be enhanced and modified to include the expenditure being made from the account of the political parties The total spending by a political party nation-wide should be the number of candidates it fields in an election multiplied by the limit of spending per constituency minus the amount individual candidates can spend on elections..

There is no need for public funding of elections. It would not be desirable to have taxpayer’s money allocated to political parties for fighting elections. Receiving political funding from individuals as well as business entities should thus be made legitimate, but all such donations should be accounted for (white money) and properly documented.

Small donations can be collected from individuals as the AAP has shown, and large donations from business houses. Proper records should be maintained and audited for all types of political donations and election expenses. 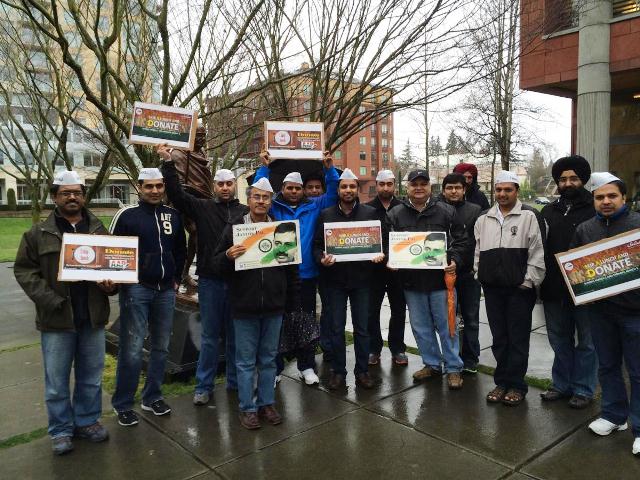 There is no need to consider money in elections as essentially evil if it is properly regulated and channelised in a transparent manner. The AAP victory in the Delhi assembly elections has shown that money power is not inevitable for success in elections, though it is necessary for practical purposes. In effect, however, people power can often turn out to be superior to money power when the latter is regulated efficiently.

In this year’s elections we have witnessed TV channels, their anchors and moderators often taking sides with particular political parties when the appropriate thing for them would be to stay neutral. It has been alleged that TV channels are doing so because they have been paid for it. It is in such matters that money power needs to be reined in or kept at a safe distance.

We cannot merely wish away the role of money power in elections which is a reality to be reckoned with. If kept within limits and properly controlled it can only act as a medium that lubricates the entire election process. Any electioneering process cannot be carried out without funding and it is certainly not desirable to use taxpayers money to meet that expense. The alternative, therefore, is to fund election campaigns through donations where the money raised is accounted for and plays a constructive role. And there is little chance that under such circumstances, money power can supersede the power of the people.