There is an urgent need to make politics belong to the people. A big tweak of the way parties function is needed to ensure this, writes R Balasubramaniam.
25 November 2012 -

There is so much of politics in the air. We recently saw the 18-month long battle for the White House ending with President Obama retaining his Presidency. We saw debates and discussions - from street corners to major television networks. All of them were predicting a close race but somehow the voters seemed to be unaffected by the polling percentages and returned Obama to the White House in a conclusive manner.

Back home in India, we too are having our share of politics, politicians and elections. Whether it is the latest cycle of Assembly elections, or the formation of new political parties, or denials of contributions made by industrial bigwigs to new parties - we have had our share of debates too. Amidst all this noise, can we try and understand what is really happening in this space?

Recently, B S Yeddyurappa, the former Chief Minister of Karnataka announced that he will be launching his own political party on 10th December. Arvind Kejriwal has now moved away from anti-corruption activism to forming his own political party. Many years ago, Jayaprakash Narayan, an IAS officer turned activist started Lok Satta, a political party with similar intent. The political space in India is so large and accommodating that we can keep having more and more political parties. But will this also translate into better politics and better governance for the average Indian? Will new parties with newer ideologies change the way politics is played in this country?

It does not take too much intelligence to understand that people seem to have their own reasons for forming political parties. After all, it is easier to start a political party in this country than to start a private company or an NGO. All that we need to do is bring together a group of people, have 100 registered voters who are not members of any party to endorse it, and file an application within the next 30 days to the Election Commission of India (ECI). We only need to submit the prescribed application form with the relevant enclosures and affidavits, including the Constitution of the Party. The ECI even has basic templates and checklists on its website to make the process easy to understand and undertake.

Though officially the ECI lists six national parties, 54 state-level parties, and hundreds of other political parties, it has been said that there are close to a thousand political parties in India. If this is a sign of a mature and vibrant democracy, surely India must be a well-governed country. But sadly the reality does not reflect this. In a speech recently, Justice M N Venkatachalliah, the former Chief Justice of India lamented that most of these parties are inactive and only around 60-70 engage in electoral politics. One party is even rumored to be having a street-corner petty tea shop as its official registered address! Another had booked his daughter's marriage expenses as party expenditure. 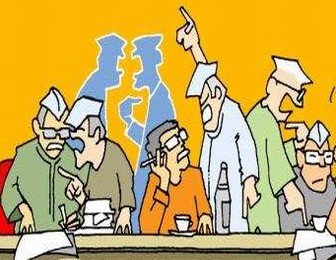 There are close to a thousand political parties in India, but most of these are inactive.

If this is the case, why do so many parties come into existence? While a few may surely believe in making a difference in the today's polity, there are other practical reasons too. Donations to political parties are tax-exempt. Many years ago, the Government of India under the then Prime Minister Indira Gandhi decided to open the flood gates of such contributions to political parties and amended the Income Tax Act to give them tax exemption. Political parties receive tax relief under section 13A of the Income Tax Act.

A look at the contributions received in 2008-09 shows that the Indian National Congress (INC) tops the list with nearly 460 crore rupees and the Bharatiya Janata Party (BJP) comes next with around 220 crore rupees. In the spirit of democracy, is the average Indian voter not eligible to know how and where this money comes from and how it gets spent? Recently the maverick politician Subramaniam Swamy raised this bogey and petitioned the ECI about the loan given by the INC to its party chief and her son. The ECI has responded to this by quoting legal frameworks, but the undercurrent question remains unanswered - what should parties disclose in the interest of transparency and accountability?

The ECI is also known to insist that it will monitor expenses of parties and candidates only during elections when the model code of conduct is in place. What about the crores of rupees that potential candidates spend much before the elections? We are now seeing this in Karnataka, with our politicians not sure when we will have the next elections to the state Assembly. Shouldn't we know where this money comes from?

A suggested first step to bring about this transparency is that the Income Tax returns by the political parties along with their contribution reports should be audited by the Comptroller and Auditor General (CAG). Another suggestion is to have investigations done on the contributors by an independent body, to know if they are receiving any gains from the political parties when they come to power. Also PAN declaration of all contributors or donors should be made compulsory. All contributions should be made through cheque or DD and cash transactions should not be allowed.

Analysis of all large parties show that none of them are seriously committed to transparency, accountability and disclosing fiscal information in a simple and understandable form to the average citizen.

If party's funding and fiscal affairs are mired in secrecy, so is their commitment to inner-party democracy. The ECI clearly stipulates and mandates that all parties registered under it should have elections and inner-party democracy. It is ironical that we continue to have one or two individuals or families dominating and controlling most political parties in India today. Only a handful have shown a modicum of democracy. Elections, even if held, are stage-managed and Presidents are decided in advance by different interest groups. People amend their constitutions to give their leaders unfettered power and freedom.

It is ironical that there is truly no party which operates in a democratic manner in the world's largest democracy. Would it be feasible or thinkable even for a man on the street to join a political party as an ordinary member and aspire to rise to be its President at some point of time? In the recent past, the youth wing of the INC is trying to democratize itself, though they have a long way to go.

Should not parties that are already in existence and being formed now clearly communicate their ideology, their membership, their core competences and their reasons to be political to the common man? Should not the average citizen be privy to all the fiscal and governance information of these parties? Change can happen only when each of us start thinking politically too. We need to understand that political parties are also public spaces and it is not just our right but a democratic obligation to demand accountability, transparency and democratic governance from our parties.

Being members of a democratic State is enough for us to engage in this participation for change. We must demand that our political leaders form parties only when they can demonstrate that they have the competence to not just compete electorally but also have the intellectual resources to shape public policy, bring in much-needed good governance and subscribe to the highest principles of democratic leadership. Will our leaders give themselves limited tenure and terms in heading their parties? Will they move away from making parties their personal family fiefdoms and transfer ownership to the people to whom it truly belongs?

When all this happens, the Indian political scene will be truly transformed and politics will again rightfully belong to the people and become citizen centric.