Put your money down, boys

Ganjam migrants in Surat send home Rs. 400 crore a year, a fourth of that through the unique Tappawala courier system. But global recession has seen remittances take a hit, writes P Sainath.
15 August 2009 -

He does not want to be named or photographed, nor have his village identified, though he speaks freely. His fraternity is crucial to the lives of nearly half a million migrants from Ganjam who work in Surat. He may have been an agricultural labourer or small farmer in his origins, but is now part of a tiny elite running an operation worth around Rs.100 crores a year in this single Orissa district. Meet the 'Tappawala,' Ganjam's parallel 'postman' or money courier.

How do migrants send money home to their families, and how much? "Our conservative estimate is that Ganjam's migrant labourers remit Rs.500 crores a year back to their villages" says Lokenath Misra of the NGO Aruna, whose "Sethu" project attempts to serve as a bridge between Ganjam migrants and their homes. "Of this, Rs.400 crores comes from Surat alone. A full picture is not possible, as the industry is illegal."

So what does a Tappawala do, anyway?

"I spend 15 days in Surat and 15 days here in this Ganjam village each month," says the Tappawala who has been in the trade for 20 years. "In Surat, I contact the 200-300 labourers I service and ask them if they would like to send money home. Each sends around Rs.2500 a month." This implies his handling between Rs.5 and 7.5 lakhs a month. But this is for nine months only, since the migrant to Surat normally spends three at home each year. So our Tappawala is handling between Rs.45 and 67.5 lakhs annually. "When in the village, I collect parcels for the migrants in Surat from their families. That includes hot pickles and other foodstuffs."

Does the returning Tappawala carry all that cash on him from Surat? "Not the whole distance. Typically, he would buy a bank draft with that in Surat on a branch in Berhampur (Ganjam's main town). He would cash that in Berhampur and reach the village by bus or jeep. So he'd really carry cash only for about three hours and 80-100 kilometres."

Some big Tappawalas have prospered enough to be elected Corporators in Surat.

"There are about 100 Tappawalas," says the main one speaking to us. (Tappawalas in other villages confirm his figures.) "Of these 80 are minor to middling, like I was" He insists he is 'retired,' though the respect shown by those around him suggests otherwise. "In this league, you handle a maximum of Rs.7.5 lakhs a month." So 80 of them deal with between Rs.36 and 54 crores a year. "There are about 20-30 big Tappawalas. They move over Rs.10-15 lakhs a month each, some of them much more." Implying they handle anywhere between Rs.18 and 40 crores a year as a group, or "much more." Remittances "peak between May and October owing to wedding and festival seasons."

"But remittances have taken a big hit with the recession," he says, (using the word recession in English). "Our volumes are badly down." The collapse of the export sector in urban Gujarat has had hard-to-imagine ramifications in Orissa's villages. That collapse has seen nearly 50,000 of close to half a million (overwhelmingly male) migrants in Surat return to Ganjam.

Migrant remittances are the mainstay for Ganjam's roughly 3.5 million people. This has been a high-migration district from British times, particularly after the great famine of 1866. Ganjam labourers have been to myriad destinations, including Burma where some joined Netaji's Indian National Army during the freedom struggle. Three "Burma Streets" in Berhampore remind us of the link. Today, Ganjam migrants are all over India. A small group even works as plumbers in Ladakh. Nobody knows the total number of migrants from Ganjam, but they could number up to a million.

Lokenath Misra of Aruna says: "On average, Ganjam migrants from all places send in maybe Rs.10,000 a year each. We reckon all migrants making remittances send home at least Rs.500 crores a year to this district, totally. Of this, perhaps Rs.400 crores comes from Surat from where people send home much higher amounts. But even there, poorer ones who come home only once a year bring their savings with them and do not use the Tappawala." 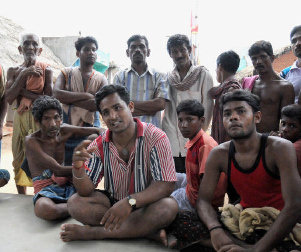 Villagers in Ganjam explain how they send money home from Surat. However, the Tappawalas obviously stayed out of the photograph. (Picture by P Sainath).

Some big Tappawalas have prospered enough to be elected Corporators in Surat. Suggesting these individuals are handling much more than the annual average of Rs.1.35 crores for members of their league. "Our rates are normally Rs.30 per thousand," says our Tappawala, who earns around Rs.2.5 lakhs a year. "For that your money gets delivered within 8-15 days. 'Next-day delivery' charges are Rs.40 per thousand."

Next day delivery? How? "Oh, we now have networks of our relatives. Usually urgent transfers involve just a few thousand. So we ring up our relatives here who may withdraw it from the bank and give it to the family." Sometimes, he adds virtuously, "the man wanting to send money home may not have any ready, so we advance it ? interest free." But an interest rate of Rs.5 per hundred per month ? the standard rate of the local moneylender ? kicks in from the second month.

Technology helps. "Earlier, we'd have to physically meet all our contacts in Surat. Today, some one in that group would have a cellphone so enquiries are a lot quicker." Also, he reveals, "a few of us are using the Internet for money transfer." He's cagey about the details of this method but it is mostly about sending an email from Surat to a contact in Berhampur. (Probably an illegal moneylender.)

Why should people use him? Why not a bank or post office? "Several do use banks, but most of us have never had a bank account," point out those sitting around the Tappawala. And, he adds, "people feel intimidated in a bank." And the post office? "Even if you are literate, which most migrants are not, you cannot fill out your money order form in Surat in the Oriya language. Getting someone to write it in poor English risks having your money order going astray."

Orissa has recently seen a few postmasters making off with crores of rupees in savings and money orders entrusted to their care by mostly illiterate people. Migrants feel more secure with the Tappawala as his family usually lives in their village or in one nearby. "But we have a security problem," says one. "Once identified, there's a risk." Tappawalas have faced lethal attacks on that cash-carrying stretch from Berhampur to Ganjam's interior villages. Maybe that's why most of them insist they've "retired." They're silent about when they did so. But their money talks.