Construction without approval. An incomplete public hearing. Failure to notify local residents in a timely manner. It seems no amount of non-compliance with the law is enough grounds for the proposed expansion of the Monnet plant in Chhatisgarh to be halted. Kanchi Kohli reports.
23 March 2008 -

"It was 7 PM and District Collector Shri Ekka remarked that there has been no satisfactory answer from the company. It is because of this that the proceedings for the day could not be completed. Therefore, today's proceedings are stalled and will be resumed after 15 days at the same site" translation of extract from the minutes of the public hearing for the expansion of operations for Monnet Ispat and Energy Ltd, Raigarh.

The Environment Impact Assessment (EIA) Notification 2006 mandates public consultation (including public hearings) for expansion of industrial plants such as those of Monnet Ispat and Energy Ltd, at Naharpali in Raigarh, Chhatisgarh (see map). Such consultation is an important component of the environment clearance process. Before the hearing, the company would have had to commission an Environment Impact Assessment (EIA) report for the project, and share this with the public. This report, and the comments from the public hearing then form the basis on which an Expert Appraisal Committee (EAC) of the Ministry of Environment and Forests (MoEF) would recommend or reject the clearance to the project. All steps in the process are legally binding and need to be completed.

It is to meet this requirement that a public hearing for the expansion of the Monnet plant was organized on 4 August 2007 at the Government High School grounds at Naharpali in Kharsia Tehsil. From the official minutes of the public hearing - as noted above - it is evident that the hearing remained incomplete. But what really happened? Why did the collector call for an unsatisfactory closure?

Much of the day had in fact been spent in tense questioning, strong protests and even a lathi charge by the police, and it was only towards the early evening that some of the real concerns on the contents of the EIA report were raised. A number of discrepencies were noted in the report, but the representative of the EIA consultant Min Mec Consultancy Pvt Ltd, though he admitted the discrepencies, simply could not explain them. This was duly recorded, and the District Collector rendered the public hearing deficient.

EIA reports of poor quality have been an issue for quite some time now, and the MoEF, project proponents, civil society, media and others agree on this. Still, it is not everyday that a public hearing is cancelled because of a poor quality EIA. Indeed, this situation is so rare that MoEF does not have any norms to deal with such a situation; in a response to my RTI application dated 20 September 2007, the MoEF acknowledged that they have no guidelines laid down to deal with instances where an EIA consultant acknowledges faults in the EIA report. 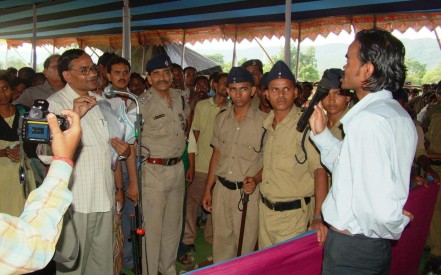 The EIA consultant's representative being questioned during the public hearing.
(Photo by Rajesh Tripathi)

The lack of clarity in the report should have led to a denial of the company's interest, and a re-scheduling of the public hearing. But that is not what happened. Instead, on 26 and 27 October 2007, the project came up for appraisal before the EAC for industrial projects. At this meeting, it was minuted that "The Committee deliberated upon the issues raised during the Public Hearing / Public Consultation conducted by the Chhattisgarh Environment Conservation Board on 4 August 2007, which have satisfactorily been incorporated in the final EIA/EMP report. The issues raised during the public hearing and the point-wise clarifications provided by the Project Authority were discussed at length." Accordingly, the EAC recommended that the project be granted environment clearance.

Thus, even without a complete public hearing, the project was granted clearance on 26 December 2007. At this stage, another round of questionable conduct entered the picture. Neither the project proponent nor the MoEF thought it necessary to immediately inform the people of the area about the clearance that had been granted, although this is required by the EIA notification. As a result, locals continued to wait for a proper public hearing, unaware that decision makers had accommodated Monnet's interest already.

The news of the plant being granted approval appeared in a local newspaper Navbharat on 4 February 2008, and it is only at this stage that the company apparently decided it was time to inform the public about the clearance it had obtained. Advertisements in the newspapers announcing this appeared one and a half months after the legally required time for their publication had passed.

The Monnet plant has had a problematic history, and given that, perhaps none of these illegalities should come as a major surprise. There have been recorded instances - both official and through citizens' complaints - against the plant and the pollution it is causing in disregard to conditions set by the Chhatisgarh Environment Conservation Board (CECB). The principal of Jawahar Navodaya Vidyalaya, a nearby central government residential school, had written to CECB officials and the District Collector on 28 February 2007 that students had been complaining of asthma, respiratory problems, headaches, eye and skin infections, etc. and linked these to the emissions and discharge from the Monnet plant.

The news of the approval appeared in a local newspaper in February 2008, and only then did the company inform the public about the clearance it had obtained.

•  A faint new wind at NEAA
•  An undemocratic environment

Based on this the CECB authorities carried out an inspection at the plant on 19 March 2007 and found that the pollution control equipment were not in operation. But the CECB took no action but filed a civil suit on 4 April 2007.

Another violation was noted in July 2007, on a complaint by the villagers. This time, CECB filed a civil suit alleging that the company had already completed most of the construction work of its 1.7 ML tonne integrated steel plant for which the clearance had not yet been obtained. The clearance would eventually be granted four months later, but the company had confidently carried out the construction ahead of this clearance.

For those who have traced and engaged with the implementation and dilution of the EIA notification for the last several years, instances like this no longer come as a surprise. It is simply a reminder of the deterioration of good governance and participatory decision making, violating the Indian legal framework as well as the country's international commitments. India is a signatory to the Rio Declaration on Environment and Development which it signed on to in 1992, two years before the EIA notification was first issued in 1994 (it went through a major amendment in 2006). It binds the Indian government all the Principles that the Declaration adopted, including Principle 10, which reads:

"Environmental issues are best handled with participation of all concerned citizens, at the relevant level. At the national level, each individual shall have appropriate access to information concerning the environment that is held by public authorities, including information on hazardous materials and activities in their communities, and the opportunity to participate in decision-making processes"

Having signed this document, the government promptly forgot it. The Monnet case goes against every word of the above principle. It raises serious concerns of transparency, decision making and complete disregard to the public interest.