Shakuntala Pawra knew that her home would be submerged by the backwaters of the Narmada dam, so she accepted the government's offer of resettlement. Except, she is drowning there too. Neeta Deshpande reports.
05 February 2010 -

After she moved to the resettlement site of the Sardar Sarovar Project at Jawdawadi - 18 kilometres from Shahada town in Nandurbar district in north-western Maharashtra - Shakuntala Pawra's worst fears of submergence proved true in an entirely unexpected way. Shakuntala had relocated home and hearth before the monsoon of 2006, to escape the backwaters of the Sardar Sarovar dam that submerged her field in the Adivasi village of Sawriyadigar in the Satpuda mountains. If she had stayed on in her own village, Shakuntala's home was expected to be drowned by these backwaters which join the Udai river skirting Sawriyadigar.

So when the Maharashtra Government offered her family agricultural land and a house plot in compensation at the Jawdawadi resettlement site 85 kilometres away, Shakuntala moved, hoping that though she would have to brave a whole new way of living away from the forest and the river, at least, she would not be drowned out. Little did she know.

To begin the process of relocation, Shakuntala's sons Lalsingh and Baburao temporarily moved to Jawdawadi in 2005 to begin farming the ten acres of land that the Government had allotted to the family. In those initial days, the brothers lived in a cramped tin shed housing many others who had relocated like them. They couldn't accommodate themselves in the shed, and they couldn't sleep outside because of the rains. Since there were no sheds for animals, they had to be tied out in the open, suffering the downpour.

Soon the bullocks had to be taken back to Sawriyadigar, and not being able to find a tractor to plough their fields and sow on time, the brothers were faced with a failed crop. Having no grain, they had to purchase it for their daily meals, an expensive proposition that made their life even more difficult.

After an entire year of such hardship, the family was finally allotted a house plot. Shakuntala and her husband Sundya packed up their belongings, including wood for their new house, and boarded the vehicle the Government had arranged for their move. To transport their livestock, they had to make another trip to Sawriyadigar and take the animals to Jawdawadi by foot, a trip which took two nights and three days. Shakuntala's sons Baydas and Baburao and daughter Ushabai, did not satisfy the Maharashtra Government's criterion of being 18 years of age on 1st January 1987, and hence, were not allotted land at Jawdawadi. Leaving them along with their grandmother - Shakuntala's mother Sablibai - in Sawriyadigar with the hope that they would be declared as eligible for land in the future, the rest of the family left for Jawdawadi. 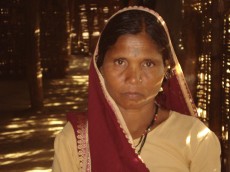 Speaking of three of her adult children who are not considered eligible for land allotment according to the Government's resettlement policy, Shakuntala asks, "How can the cut off date still be 1987 when her family's resettlement was facilitated as late as 2006?"

Five months after their move, the Pasli stream skirting Shakuntala's new home in Jawdawadi overflowed in the monsoon of 2006, and water entered her house of wood and bamboo. The house plot had been allotted in a nala, because of which the rainwater reached up to their waist. Water from the adjoining farm at a higher height also flowed into the house. Clothes, utensils, blankets and wooden logs brought from their old house in Sawriyadigar were swept away. Shakuntala and her family fled to Wadi, a neighbouring village. Grain rotted, left behind in the rising waters. Hens died. For two days and nights, the family stayed at Wadi, somehow cooking khichadi for the children. After the water receded, they returned home, to the stark realisation that despite making a move which redefined their very existence, the waters they wished to escape had finally caught up with them.

But their problems were far from over. In addition to their house which was flooded three times in 2006 and once in 2007, the farmland allotted to Sundya was also not spared. Two years after two acres of Sundya's land in Sawriyadigar was submerged, the family was shown another piece of land for their resettlement in Jawdawadi. When the Government officials came to measure and allot the land, Sundya and his eldest son Lalsingh - who has studied up to the tenth standard - were out of town. Shakuntala and her other son Kadusingh were offered the plot, and though the land was good, more than one acre was in a three to six feet deep nala. Shakuntala told the official that she didn't want such land, that she should be shown another plot of land. But the official informed her that this particular plot of land had a borewell, which she might have to forego if she were to choose land elsewhere. Take it or leave it, he said.

According to the Narmada Water Disputes Tribunal Award and Maharashtra Government policy, irrigation facilities upon resettlement are to be provided by the state. Shakuntala thus has a right to irrigation on a plot of land of her choice. However, she was forced to accept the plot of land that was shown to her, more than an acre of which would be unusable. When it rained, she lost her maize crop to the water. In her first year at Jawdawadi, her land yielded only six quintals of jowar, not enough for the family to get by.

To add to this, her new life is mired in a variety of insurmountable difficulties. Water for drinking, bathing and washing clothes is not always available. A pipeline had been put in place, but the pipes floated away with the rainwater in the nala which runs through the site. Taps had been installed, but they were swept away during the rains too. Electricity has not been provided, nor have bathrooms and toilets. There is no road to go to her field, nor any sanitation facilities. In Sawriyadigar, Shakuntala could go to the hills for her morning rituals, and to the river to bathe and wash clothes. Here in Jawdawadi, she has no privacy, and must bathe inside her house without the availability of a bathroom.

At times, her sons must labour on other people's farms or construct houses in villages and towns in the area, for a meagre thirty rupees a day. Visiting Sawriyadigar to see the rest of her family and continue her job as an assistant to the village nurse - Shakuntala must spend Rs. 155 per trip, which she can ill afford with her monthly salary of Rs. 600. All in all, she is faced with tremendous difficulties which she can in no way remedy, her only recourse being to complain to the Government officials who routinely ignore her. 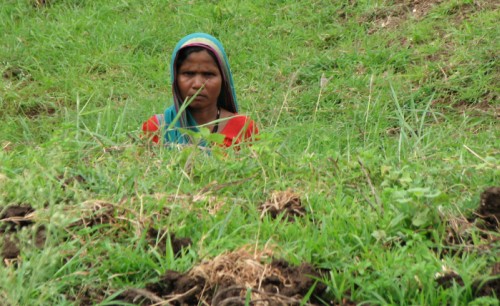 Shakuntala Pawra in her field

Feeding her family has become a major source of Shakuntala's anxiety at Jawdawadi. In her original village in the Satpudas, she collected her cooking fuel from the forest. Now cleaved from the jungle, Shakuntala must make do with wood transported all the way from Sawriyadigar to Jawdawadi, or plant stalks from her field. What will she do when she can no longer continue with this arrangement? She has no answer.

In Sawriyadigar, her children's diet included fish from the river and milk from her cows. But after moving to Jawdawadi, she was forced to take her livestock back to Sawriyadigar for lack of facilities in her new home. There was no place to graze the animals, no water for them to drink, and not enough space to store their feed and tie them. As a result, the children have to go without milk and fish, an important source of nutrition. When food runs out, Shakuntala must travel to the market, costing her twenty rupees a trip. For a while, when she ran out of money she managed by selling her livestock. But she was soon forced to take a loan of Rs.9500 for her agricultural expenses which have now increased, something she has never done in her years in Sawriyadigar.

Another cause for great anxiety is her children's future. According to the Maharashtra Government's policy, major sons and unmarried major daughters are to be treated as separate families, the criterion for eligibility being that they are 18 years of age on 1st January, 1987. Such major sons and major unmarried daughters are entitled to five acres of land. Two of Shakuntala's sons - Lalsingh and Ramdas - satisfy this criterion, yet, they have been provided only 2.5 acres each. Moreover, Shakuntala's sons Baydas and Baburao, and daughter Ushabai, though over 18 years of age as of today, do not satisfy the criterion for land allotment. Isn't it absurd, she asks, that her adult sons and daughters do not qualify for land? How can the cut off date still be 1987 when her family's resettlement was facilitated as late as 2006? How does the Government expect her children to live?

More immediately, Shakuntala must worry about the annual monsoon, and a question she has grappled with for more than twenty years, since she first heard of the Sardar Sarovar dam. When the water rises, where will she go? Despite leaving her land, her house, her jungle and river behind, the answer to that question is still, nowhere in sight.