Demanding, and getting their entitlements

We can fight the scrouge of corruption not by legislation nor by moral pressures but by an awakened community which refuses to settle for anything less that what is its legitimate due, writes R Balasubramaniam.
06 September 2010 -

I was in Muguthanamoole on the 5th of last month along with Poshini and Devaraj, my colleagues at SVYM. Poshini and her team are passionate about empowering the local community and getting them to understand the concept and practice of 'entitlements'. For the last few years, we have been trying to get people to use the Right to Information Act to secure what is rightfully theirs. We are also working with 'communities' in getting them to make their local Fair Price Shops (part of the Public Distribution System) become more responsive and deliver on their mandate.

Food security in rural areas for people living below the poverty line depends mostly on the PDS of the Government, but it is common knowledge that the entire PDS system from reeks with corruption. Many Antyodaya cardholders in Karnataka entitled to 29 kgs of food grains end up getting only 15-18 kgs and that too at the whims and fancy of the FP shop keeper. Most of these shopkeepers are well-connected to local politicians, and get away with bullying and bulldozing any opposition from the people.

This meeting was after many months of quiet persuasion and capacity building carried out by Devaraj among the many community-based organisations in the village. For me, attending these meetings were a way of recharging myself and directly experiencing the joys of community mobilisation. 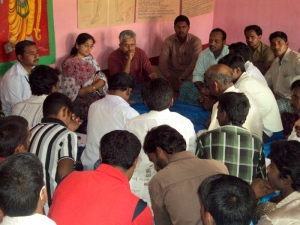 Watching the energy and the process left me feeling happy that communities could be aroused to understand the concept of entitlements and demand what is rightfully theirs.

The local gram panchayath President, Siddharaju was also invited to the meeting. Our main focus was to activate existing systems and make them respond to community demands. The panchyath President was sensitised on what was expected from him and the gram panchayath vis-a-vis the problems of PDS and food security faced by people living within his jurisdiction. Over the last many weeks, Devaraj had quietly explained the PDS system, the entitlements of the BPL card-holders as well as the Antyodaya card holders, and had specifically asked them to demand constitution of the vigilance committees mandated by the scheme to ensure fair delivery of rations.

People at the meeting were enthusiastic, and hungry for information. They felt outraged on realising that they were being given only around 50 per cent of their legitimate due. What angered them was the indifferent and arrogant attitude of the PDS shopkeeper. They asked the panchayath president to discuss their plight in the next panchayath meeting and pass a resolution to set right affairs. They also wanted the vigilance committees to be formed as early as possible.

Watching the energy and the process left me feeling happy that communities could be aroused to understand the concept of entitlements and demand what is rightfully theirs. But I was also worried; about how the system would respond to these emerging demands. Worried whether political opposition and the interests of the rich and mighty would stifle out this organically evolving community power.

My fears were misplaced. A few days ago, some representatives of the community came visiting to Saragur and were visibly happy. They were feeling exuberant that they local shopkeeper had come around and apologised for denying the people their due. He promised to make amends and had started supplying them their full quota. This was the first time that their voice was being heard and it was indeed a heady feeling. Democracy can be quite intoxicating and I was left feeling confident that we could indeed fight the scrouge of corruption not by legislation nor by moral pressures but by an awakened community which refuses to settle for anything less that what is its legitimate due.