Not just a place to live

In Sriramagiri panchayat, a few Kondareddi settlements want nothing to do with the relief and rehabilitation package for those who would be displaced by the Polavaram dam. Fighting off underhand tactics by officials, they are determined to remain in their homes, amidst their culture and its history. R Uma Maheshwari reports.
23 February 2007 -

They said her name was Seetamahalakshmi. It conjured up in my mind an image of a middle-aged woman, just another of those proxy women panchayat representatives. I've visited many other villages in V R Puram mandal of Khammam district, and one becomes familiar with the typical occupants of these offices reserved for women, but often managed by them in name only. But my mind's image of this Kondareddi woman vanished with a pleasant surprise. Out walked a young sprightly woman, with a sportsperson's gait, dressed in pant and shirt, her wavy hair plaited behind. A woman with doe eyes and skin like porcelain. I was introduced to Kotla Seetamahalakshmi, the 23-year-old Panchayat President of Sriramagiri panchayat, amidst the warmth of a late afternoon in early February. 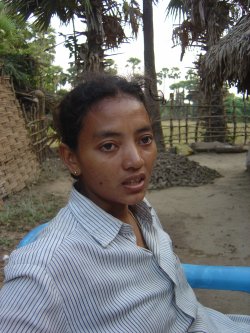 Seetamahalakshmi's beauty is not a stereotype to bind her character in; it is something that adds to her persona, of one leader, among many, who refuses to move an inch from her stated position. Sriramagiri panchayat is one of the many that will be submerged under the Andhra Pradesh government's proposed Indira Sagar (Polavaram) dam on the Godavari river. And its sarpanch is firmly against the dam and the government's 'packagi' (the relief and rehabilitation package, as it is referred to in these parts). Her views are heartening, especially since on this particular trip, I've witnessed too many people from the submergence-area villages gradually losing hope and the will to resist the power of the state.

Seetamahalakshmi studied up to the tenth standard at different government schools at Chukkanapally, Chintur and V R Puram. She was also a Vidya Volunteer in the Mandala Praja Parishad school for four years. Her parents had wanted her to study further, but she says, "I did not want to put a further burden on my family. I wanted to help at home. So I quit. Moreover, I did not have good teachers. So I lost half my interest because of that ..." She is one of two siblings; her older sister is married and lives in another village. And she lives with her parents. She is single. Her father, Kotla Kamireddi was the sarpanch of this panchayat for 10 years, following which she was elected last year.

Her home is in the hamlet called Godavari gumpu, in Chukkanapally just by the banks of the Godavari. There are three hamlets in this area with Kondareddi settlements (there are a few Koyas as well) and, in all, the Kondareddi farmers own approximately 500 acres of cultivable land, according to Seetamahalakshmi. Women outnumber men among the Kondareddis, and the panchayats of Jeediguppa, Tummuleru also boast of women sarpanches.

Sriramagiri, nearby, boasts of an ancient temple, believed by some to have been built by the Kakatiyas, and it has suddenly become a thriving tourist attraction. From one to two buses a day some years back, today there are nearly 10 buses bringing visitors to this temple daily. Of course, one hears it said a lot that the money from this new tourist attraction is not adding to the panchayat funds, as it rightly should. The tourists come in hordes, and leave, with little connection to the surrounding reality. They have little knowledge of the tribals who live here, or even that this temple too will be submerged under the waters of the Polavaram dam.

Conversing with the sarpanch, I am struck by something - these are not people who will give in easily, even though all around them the government's land acquisition process has steamrolled other villages. She says, "The Mandal Revenue Officer (MRO) here went to all the villages in my panchayat, and seems to believe the sarpanch is not necessary for any of these visits. One of our community men in Kalthanuru (another village in the panchayat) in fact told me that the village elders there had said they want to consult the panchayat president before deciding if they will give their lands. But the MRO told them, we do not need her. The MRO told them, as he told us the other day, 'mundu poina vaallake tikkatlu, veneka oste tikkatlu dorukavu' (if you come first you will get the 'ticket' - the compensatory package - and not later on).

We don't want to go. There are poor landless people here whose livelihoods are linked to the forest, collecting non timber forest produce. What will happen to them? What is point of me as a sarpanch if I am not consulted by the officials? The MROs are big people ... In our gramasabha last month we had resolved we do not want Polavaram. The Mandala Praja Parishad (MPP) members too passed a resolution in five mandals in Khammam district that people here do not want Polavaram."

"What is point of me as a sarpanch if I am not consulted by the officials?"

•  Repeating a dammed history
•  Less than half a voice

Many do not consider the tribal communities as farmers. But in these parts, in Khammam and in the districts of East and West Godavari, tribal communities cultivate lands (the cultivation is mostly rain-fed) and have lived on the food they grow, supplemented by the forest produce. Their lives are intricately linked to the forests, the land, and the seasonal floods. Post floods, as one can clearly see, the silt deposited leads to a boom, and the landscape is filled with diverse crops - chillies, jonna (maize), some pulses, lentils, and others. In very small pockets, paddy is cultivated by some tribal farmers. The non-tribals (settlers, mostly) brought in tobacco cultivation, and this is used in making the local chutta and cigarettes. In tribal hamlets, tobacco is not so extensive.

Seetamahalakshmi points out, "We use the Godavari water through motors to irrigate our lands. Godavari comes once a year and goes," she says, referring to the floods. "We have learnt to live with it. It is normal for us to climb on to higher reaches of our hills when that happens. But our homes and lives were never destroyed totally." The father, Kamireddi, pitches in - "We do not know since when, but surely since civilisation began our ancestors cultivated lands here."

In the last few years, developmental programmes have brought some services to these tribal people - notably education, with schools and colleges with residential facilities being part of the tribal welfare agenda in government. The irony is that while on the one hand various schemes and programmes for tribal welfare are being promoted, so many of the large projects being conceived and implemented - such as the Polavaram dam - lead to large-scale displacement of those very communities, utterly alienating tribals from the government.

Seetamahalakshmi is saddened by the underhand methods employed by the government to urge people to give up their lands. Besides making conditional take-it-or-lose-it offers, officials also spread rumours and lies. In January, she says, the Sub Deputy Collector (SDC, Krishna Kishore) of the Polavaram project and the MRO of V R Puram (Murahari) "went to Mulakalapally, a village nearby, and Kalthanuru and claimed they had convinced people to give up their lands. They did not take my permission ..." Officials also claim to have conducted 'surveys' in these villages after the floods of 2006, and using these to encourage people to move. "They used to talk about survey. They came recently. They are showing forms which read, 'Godavari mumpu baadithalu ki...' (for those affected by the Godavari floods' submergence), nothing about Polavaram. I questioned the MRO in this regard. He said these were the CM's (Chief Minister Y.S. Rajasekhara Reddy) orders, to have this kind of form."

People in Mulakalapally and Jeediguppa were also confused about the Godavari varadalu (floods) mentioned, she says. "At a meeting in the mandal office recently I learned that only the Mulakalapally non tribals had expressed consent to leave. The Jeediguppa sarpanch told me she thought it was rehabilitation for the Godavari floods. She did not think they were giving consent to the Polavaram dam! She is educated, yet she did not think anything could be wrong. I had to tell her the forms were meant for Polavaram and not Godavari floods. The officials are telling lies, conducting surveys and convincing people."

These dubious methods, she knows, are adopted for one simple reason - the people here do not want to be displaced, and the government does not want to recognise that basic truth. "People who have land do not want to go; only those without land are agreeing to the packagi. Landless people want to go because they will get money. But how many years can they live on that money? We need fields, and food. We get our food from our lands and the forests. We cannot survive anywhere else. We will never get this environment," she says. "We do not want to know how much compensation is coming from all of this. They (officials) did not come to tell us. But then, we are sure we will not leave this village, which is why they do not tell us about it. Anyway, when we will not leave, why even bother about the package!"

If land, forests and compensation, are 'complex' subjects, there are 'simpler' questions that people like Seetamahalakshmi ask. Where will they celebrate their festivals Samakotta (sometime in the monsoons, celebrating one of the crops); offer samalu (red millet), gongura (Hibiscus cannabinus), pottalu, totakura (Amaranthus species), etc? Or Kondajonnakottalu (celebrating the new crop - a variety of Sorghum), or Mavidikai panduga (the mango festival)? Each of their gods and goddesses (Gangamma, Rajulu, Polam rajulu, Potirajulu, Chikati rajulu, Gamutyalamma, Sayilamma, Malachemma, Chalalamma) has an associated tree. These trees are never cut down. They are not human-made icons or forms, just a 'concept', placed under a tree and propitiated. For that festival, that occasion, in that moment. Their festivals are related to the harvest or the onset of a particular season, a seasonal fruit also is a harbinger of good tidings.

What about these cultural forms? Is the government's package a demand to give these up, Seetamahalakshmi wonders. Can these be recreated on any site the government provides, and in any kind of house? She asks, simply, "maa maavidi chettlu dorukutaayandi akkada?" Will she get her mango trees there? Not just these, but all the other aspects of her history, culture, and society too?

R Uma Maheshwari is a freelance journalist based in Hyderabad. She is the recipient of Prem Bhatia Memorial Trust fellowship for 2006, for her research titled Taming Rivers, Drowning Hopes: The Polavaram Project - Irrigation or the Deluge of Contracts?