Less than half a voice

Among those whose livelihoods will be displaced by the Indira Sagar dam, women far outnumber men. But there is virtually no voice representing women's views, whether for or against the project, in all the talk of displacement here. Instead, nearly all their choices are handed down to them. R Uma Maheshwari reports.
29 September 2006 -

Of the population that would be dispossessed or displaced by the Indira Sagar dam on the Godavari river at Polavaram in Andhra Pradesh, the percentage of women far outnumbers that of men. Of the approximately 85,000 agricultural workers that stand to be displaced by the project, nearly 62 per cent are women, according to B. Venkat, State General Secretary, All India Agricultural Workers Union, AP chapter. Yet there is no recognition of women as the largest group among the displaced. Despite the high proportion of women among those affected, there exists virtually no voice that is representing women's views, whether for or against the project, in all the talk of displacement at Polavaram so far.

A local environment NGO, Sakti, has recently compiled excellent statistical information, a "demographic profile of people facing displacement under Indira Sagar (Polavaram) village wise" with a map showing the sumbergence zone. It mentions SC, ST, BC households, and the population whose homes or livelihoods will be displaced in each case. But nowhere does it give a break up in terms of gender. In early September, a book titled "Perspectives on Polavaram: a Major Irrigation Project on Godavari" published by Academic Foundation, Delhi, in collaboratiion with the World Wide Fund for Nature, 'Dialogue on Water, Food and Environment' project, and Sakti was released in Hyderabad. It has virtually all perspectives - technological, legal, and political perspectives (it is meant to be a neutral exercise) - but in this 231-page book there is not a single article presening the gender perspective. And in state where the women's movement has had a significant history

It is also strange that none of the womens' organisations based in or operating from Hyderabad have taken a public view of the implications of the Polavaram dam on women. Either by way of research, or at seminars, or discussions; even at the level of engaging the state government, their voices are conspicuous by their absence. A few well-known persons from womens' organisations attended the one major meeting held in Khammam district this year, but little has come of it. 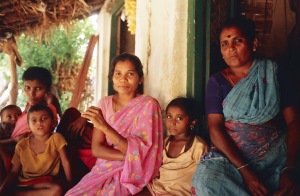 The Polavaram project's promises too are in languages men use and understand. All through my journey along Godavari, along these villages that might not be, men almost always speak of "R&R" and "package". Some of them, mostly the non-tribals, even talk of accepting their displacement if they get a good package - 'manchi packagi'. These are conversations that exclude women consistently. And throughout the area identified for submergence, women in the villages have more questions than the men. Deep down, they know that the men are likely to look at the project in terms that have no meaning for the women, like 'compensation'. In different castes and communities, they voice similar concerns - as women about to be affected greatly by plans that completely bypass them  designed, planned, and implemented (largely) essentially by men.

The promises, in any event, hold little meaning for the villagers. "Here since the last thirty years we have been asking for a hospital. Till date they did not build it for us. What is the guarantee they will give us all this somewhere else? At least this is our own area. We know it. We were born and brought up here", says Vijaya of Kathanapally, in East Godavari district. She adds, "This project is not for the people. That is what I understand. We do not know what they are doing in this project. All I know is that my village here will drown. Government people came for some survey. But they never told us what they were doing. What is this dam all about? They may have spoken to men here."

As I travel across Godavari, and move from one village to another, I often spot two women, sometimes a mother and daughter, at times, two friends, like this pair in Kondamodalu village who fish for hours starting at day break at the river with their saree as a net, on days when no vegetables arrive in the launches. They have learnt to make the most of their limited contexts. For instance, the health system. In the fourteen villages of Kondamodalu gram panchayat there is a single PHC and that too locked most time when I am there. If a woman were to deliver a child, she will have to be taken all the way to Devipatnam, some three or more hours on a boat  if she were lucky to get the boat in time.

That women have had an intrinsic relationship with the river is of course a far cry in these matters. Their days are strongly related to the ebb and flow of Godavari. With dawn starts their first approach to the river, for water, to wash clothes, sometimes fish. But they have faced turbulences too, all this while on account of the same Godavari. Yet, all these years since independence, no governments, no department helped them this far when these upheavals happened. Instead, the women themselves found solutions. For instance, Kumari, from Kondamodalu village, who prides herself on a spotless clean home and a courtyard garden filled with gladioli and other blossoms, says, "We tend to keep few things, few utensils, for when Godavari comes we can quickly move to the hill top. When she recedes we come back to our homes."

The passing fury of the Godavari is very different from the dislocation that the government's plans will cause. From this, there will be no going 'back to our homes'.

The passing fury of the Godavari, however, is very different from the dislocation that the government's plans will cause. From this, there will be no going 'back to our homes'. The Centrally Empowered Committee of the Supreme Court, under the chairpersonship of Mr. Vijay Krishnan, a retired IAS officer, visited these areas between the 29th and 31st of July to ascertain the 'facts' to gauge the 'damages' that the project would do to the nine mandals of three districts of the state. They did not have the kind of time or space for looking at the issues in terms of the likely effects on women  the ones who really know how life in these areas will be reshaped dramatically.

The irony is that so many major projects that ignore women are carried out in the name of irrigation, never mind that a larger number of India's farm workers are women! For most of the women, the choices are simply handed down. A young woman from Devaragondi, at a rehabilitation colony construction site near Polavaram, said to me, "I do not like it here. I do not like these houses. They (includes the government officials and her husband) forced me to do this (work as construction labour on her own future home). What can I do? I am helpless. My husband will not listen to me."

R Uma Maheshwari is a freelance journalist based in Hyderabad. She is the recipient of Prem Bhatia Memorial Trust fellowship for 2006, for her research titled Taming Rivers, Drowning Hopes: The Polavaram Project - Irrigation or the Deluge of Contracts?. A version of this article appeared in the Telugu daily Prajashakti