A Toxics Link report on Persistent Organic Pollutants and the challenges for India.
01 December 2003 -

Of all the pollutants released into the environment every year by human activity, Persistent Organic Pollutants (POPs) are among the most dangerous. They are ubiquitous: found even in the most remote areas, far from any industrial activities. Even though they are present in the environment at extremely low levels, they have been linked to many health and environmental effects. With the evidence of their longrange transport to regions where they have never been used or produced, and the consequent threats they pose to the environment, the international community has at several occasions called for urgent global action to reduce and eliminate releases of these POPs.

The Stockholm Convention, a global treaty to protect human health and the environment from POPs, decribes POPs this: "POPs are chemicals that remain intact in the environment for long periods, become widely distributed geographically, accumulate in the fatty tissue of living organisms and are toxic to humans and wildlife. POPs circulate globally and can cause damage wherever they travel."

The twelve POPs have been identified by the Convention and are commonly known as the dirty dozen. They are DDT, aldrin, dieldrin, endrin, chlordane, heptachlor, mirex, toxaphene, hexachlorobenzene (HCB), polychlorinated biphenyls (PCBs), dioxins and furans. Of these, nine are organochlorine pesticides. PCBs are compounds with varied industrial applications, while HCB, PCBs, dioxins and furans are produced unintentionally, industrially as well as otherwise.

Chlordane
Uses: Fumigant, acaricide, and is most effective on termites. Also used on household pests.
Persistence/fate: It is highly persistent in soils with a half-life of 4 years. It binds to aquatic sediments and bio-concentrates in organisms.
Toxicity: Its most possible pathway is through the air. There is evidence of endocrine disruption in intact organisms. It is a possible carcinogen in humans and disrupts the immune system. It is a contact poison with long residual effects.
Banning status in India: Complete ban on manufacture, use, import and export.

POPs have been detected in various human tissue samples, animal samples and aquatic species often in higher concentrations. POPs exposures even at low doses (the timing of the exposure being as important as the dosage) can cause undesirable health effects, especially in the more vulnerable sections of the population, such as pregnant mothers and young children. No segment of the population is completely protected against exposure to pesticides and their serious health effects, though a disproportionate burden is shouldered by the people of developing countries and by high-risk groups.

Because of the global risks posed by the long range transport of POPs, the international community is calling for global action to reduce and eliminate releases of these chemicals. In 1997, efforts were made on a global level to deal with the problem under the aegis of United Nations Environmental Programme (UNEP). The first Inter-governmental Negotiating Committee (INC) for POPs held its inaugural meeting in Montreal in June 1998 and agreed to target 12 chemicals for immediate action. This was followed by INCs in Nairobi, Geneva, Bonn and Johannesburg. A multilateral, internationally legally binding treaty to ban POPs was finally signed on May 23, 2001, in Stockholm by 87 countries. It has come to be known as the Stockholm Convention.

The Stockholm Convention sets out control measures covering the production, import, export, disposal and use of POPs. In implementing the Convention, Governments are expected to take measures to eliminate or reduce the release of POPs into the environment. Governments are to promote the best available technologies and practices for replacing existing POPs while preventing the development of new POPs. They are expected to draw up national legislation and develop action plans for carrying out their commitments. While the control measures will apply to an initial list of 12 chemicals, a POPs Review Committee will consider additional candidates for the POPs list on a regular basis. This will ensure that the treaty remains dynamic and responsive to new scientific findings.

Heptachlor
Uses: Against soil insects and termites. Also seed treatment and against household pests.
Persistence/fate: Metabolised in soils, plants and animals to heptachlor epoxide, which is more stable and carcinogenic. It bio-concentrates and has a soil half-life of 0.75-2 years in temperate climates.
Toxicity: Heptachlor is toxic to wildlife even at low concentrations. In birds, it induces behavioural changes, reduced reproductive success and mortality. It is listed as a possible human carcinogen. The main exposure is through food. Possibly carcinogenic to humans.
Banning status in India: Complete ban on manufacture, use, import and export.

More information on the other POPs is available at www.toxicslink.org.

POPs result from pesticide and insecticide manufacturing facilities, stockpiles of obsolete, unwanted or date-expired pesticides and chemicals, and the general application of pesticides (such as in agriculture) resulting in crop run-offs or leaching into ground water reserves. A variety of industrial and non-industrial processes (typically involving high temperatures) result in the release of POP chemicals such as dioxins, furans, PCBs and HCB into the environment. Among these POPs, dioxins and furans are of most concern because of their significant toxicity. In most cases, dioxins and furans released are accompanied with PCBs and HCB as well.

Pesticide POPs can get into the ecosystem various junctures such as during production, transport, storage and application. In terms of environmental management, there are many stages in the product life-cycle of pesticide POPs where care needs to be taken to prevent contamination of the environment. Pesticides, though intended for the target pest species, end up in the food chain, water and air and into non-target species and ecological systems. 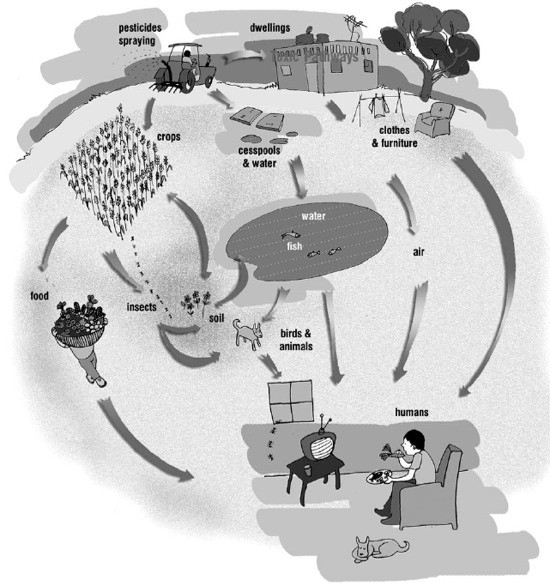 Unintentional and industrial POPs are often released in an unregulated manner and are assimilated into environmental systems. Understanding the nature of these exposure pathways is crucial to determining and evaluating POPs impact on the environment, human habitats and the economy.

Nowhere to hide, no place to go

Once in the environment, POPs are transported within the region mainly through natural media like fresh water systems (rivers and streams), atmospheric currents (usually adsorbed to suspended sediment) and marine currents. Streams receive pesticide run-offs from agricultural fields and industrial waste. POPs in the fresh water systems enter the food chain through fish raised in contaminated water bodies and, to a certain extent, by the direct consumption or secondary consumption of the contaminated water.

Amongst the pathways that expose humans to pesticide POPs, dietary exposure takes precedence over other pathways like air, water and dermal exposure. Humans represent the top of the food chain and, at the time of human dietary intake, POPs have been through several stages of bio-accumulation and are likely to have reached significant levels. This rule of primary exposure by dietary pathways is, however, not applicable in certain specific situations such as occupational and accidental exposure where dermal, atmospheric and water pathways can assume significance.

Despite the fact that most short-listed POPs are banned from use, production, import or export in India, a combination of factors has led to their continued production, trade, use and release into the environment.

Chlordane for example, has been imported in India subsequent to its ban, while aldrin, chlordane and heptachlor have been exported subsequent to their ban. The trade in POPs after their ban is an indication of the continued existence of possible hotspots in India in terms of production and storage facilities. It is suspected that DDT which is allowed for vector control but banned for agricultural purposes is pilfered and used as an insecticide.

Second, though stockpiles of obsolete POPs exist, posing a major threat to the environment, there is no known government programme to monitor them. The State Pollution Control Boards, however, do have the responsibility to identify and notify sites storing hazardous material.

Third, another issue is awareness of handling and disposal of POPs : Electrical equipment, such as transformers containing PCBs, are indiscriminately disposed into the waste stream.

Fourth, there is the threat from polluting POPs-producing technologies. Some developed nations, in partnership with local entrepreneurs, are pushing for the expansion of POPs producing technologies such as waste incinerators, waste-to-energy and PVC manufacturing plants. In some cases, the construction of these incinerators is backed by multilateral financial institutions.

The problems associated with POPs are too large, complicated and expensive for any individual nation to tackle. Hence, governments should actively participate in the UNEP process to eliminate POPs and seek safer alternatives.

The sources of POPs must be properly identified, and then phased out, replaced or removed. This is true for POPs that are produced intentionally as well as unintentionally, such as dioxins. The global POPs treaty already includes measures to discourage wealthy countries from promoting and exporting POPs-generating technologies, processes and materials to newly industrialised nations. At the same time, measures must be included to encourage wealthy countries and aid programmes to assist newly industrialised countries in developing and implementing non-POP technologies and materials.

Since incineration itself has been identified as a major source of dioxins and furans, it cannot be used as a disposal route for existing POPs stockpiles. While so-called state-of-the-art incinerators can greatly reduce stack emissions, they cannot stop the formation of dioxins and other POPs which may be present in fly ash and bottom ash. Those would still require further treatment and disposal. Alternative destruction and de-toxification methods and technologies which do not generate POPs should be used instead. In recognition of the dangers associated with incineration, countries like Australia are venturing into non-incineration destruction technologies.

Other avenues for mitigation include holding polluters liable for contamination from stockpiles of their products as opposed to the general citizenry. Also preventive action should be taken when there is reason to believe that harm is likely to be caused by human activity.

The author is with Toxics Link, H2 Jungpura Extension Ground Floor, New Delhi 110 014. This report comes to India Togetherby way of Toxics Link through Space Share, our content-sharing program for publishers of other public-interest content. Click here to learn more about Space Share.