Once bitten, twice not shy

This is a bill that the Governor of Karnataka sent back to the state government in 2007 saying that it "evidently seems to undermine the Constitutional mechanism for rural development governance.." The same bill may be back in the state assembly soon, warns Nandana Reddy.
22 July 2009 -

The Government of Karnataka is once again planning to undermine the powers of the state's gram panchayats by tabling the Karnataka Panchayat Raj (Amendment) Bill 2007 for re-consideration in the current session of the Legislature. A highly placed source in the state government confirmed this. 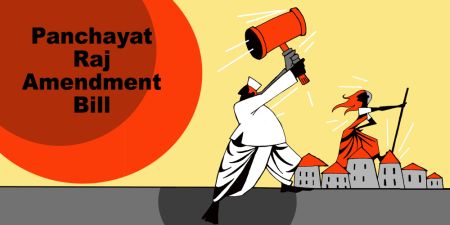 This move is follow-on to developments in October 2008, when the Minister for Panchayat Raj, Shobha Karandlaje reportedly announced the state government's intention to abolish the Taluk Panchayats and revert to the earlier two tier system. At the same time it was made known that the government was seriously considering the re-introduction of the Karnataka Panchayat Raj (Amendment) Bill, 2007 (L.A. Bill No.29 of 2007) clearly aimed at weakening the role of gram panchayats and gram sabhas in the State.

In response, in November 2008, members of the Grama Panchayat Hakkottaya Andolana put the Government of Karnataka on notice and warned that any action to subvert the process of democratic decentralisation for short term benefits or vested interests would be opposed in the strongest terms and defeated. Nothing more was heard until now.

Grama sabhas and their powers of local self-rule

Grama sabhas have been given a unique position as institutions of participatory governance under the Constitution. Article 243A defines a grama sabha as being a body of voters (citizens) of a village within a panchayat. Under the constitutional pattern, grama sabhas provide the platform for citizens to participate in local governance beyond casting their vote and partake in decisions regarding their village and is the foundation for effective participatory self governance or Panchayat Raj.

The Karnataka Panchayat Raj Act 1993 initially had provided for relatively weak grama sabhas. Under Section 3 of the Act, grama sabhas were to meet at least once in six months and if the panchayats failed to convene them the Executive Officer of the concerned taluk panchayat was authorised to do so. Then the grama sabha only had recommendatory powers under the law. The law also provided that in case the grama sabha failed to identify beneficiaries for schemes within a reasonable time, the Executive Officer shall, in consultation with the grama panchayat, identify such beneficiaries. Obviously, there was low confidence about the capacity and interest of grama sabhas and they were routinely ignored by higher levels.

The cruelty of an unresponsive administration, the oppression of an administration without a heart, the callous lack of compassion that most of our people find at the hands of much of our administration..."

"...callousness could only be ended by empowering the people to send their own representatives to institutions of local self-government."

Landmark changes brought about in 2003. Apart from establishing a two tier system under the gram panchayats of ward and grama sabhas for effective and greater peoples participation, the amendment also also listed as many as 29 functions for the panchayats, including approval of annual plans, generating proposals and determining priority of schemes, identifying beneficiaries, water supply and streetlight arrangements and promoting adult education.

In respect of beneficiary selection the new law left no room for doubt. Section 3(3)(b) of the amended Act provided that ward sabhas would identify the most eligible persons from its area for beneficiary-oriented schemes on the basis of fixed criteria and prepare lists of eligible beneficiaries in order of priority and forward it to the grama panchayat. These lists were then to be placed by the grama panchayat before the grama sabha, which under Section 3A (3) (c) would consider the lists and prepare the final lists of eligible beneficiaries in order of priority. For good measure, the law also provided that once such detailed beneficiary lists were prepared by the grama sabha they could not be changed by any higher authority.

Setting the clock back

The controversial bill called the Panchayat Raj Amendment Bill was originally introduced in July 2007 and passed by both houses of the Karnataka Legislature, was a damagingly regressive move to undermine the powers, authority and mandate of the Gram Panchayats in Karnataka, a state that has been hailed as a 'trail blazer' in decentralisation and self-governance.

It set the clock back in no uncertain terms. It inserted provisos to Section 3(3) (b) and 3A (3) (c), stating that if the Grama Panchayat fails to discharge its duties in respect of housing schemes or programmes funded by the Government, then a committee headed by the members of the legislative assembly of the constituency shall select the beneficiaries from the list prepared by the grama panchayat! In one stroke, the legislator becomes the final arbiter over decisions of the grama sabha! These provisos are dangerously open ended.

More importantly, it was a flagrant violation of the basic tenants of the 73rd Constitutional Amendment and several legislations and orders that have been passed by the state that mandate the actual transfer of powers and functions to the Panchayats; as it imposed conditionality on the powers of the Panchayats to identify beneficiaries of public schemes (such as housing) and reassigned this role to an officer of the Government or a MLA Committee appointed by the Government.

The 2007 Bill provoked a massive response by members of gram panchayats throughout the state under the auspices of the Grama Panchayat Hakkottaya Andolana, a movement federating members of over 80 panchayats, institutions and individuals, united across political parties. Presently, the Concerned for Working Children are the state coordinators of the Andolana.

The Andolana petitioned the then Honourable Governor T N Chaturvedi, and requested him not to approve of an action that violates the Constitution and specifically its 73rd Amendment that all elected representatives have pledged to uphold on assuming office. Happily Sri Chaturvedi did not put his seal on the 2007 Bill and returned it to the Legislature with elaborate and eloquent comments. In his submission, he wrote:

..while going through the present Karnataka Panchayat Raj (Amendment) Bill 2007, it evidently seems to undermine the Constitutional mechanism for rural development governance as enshrined in Part IX of the Constitution of India and the Karnataka Panchayat Raj Act, 1993 which are intended to implement the 73rd amendment with the twin objectives of broader democratic representation (Article 243C-243F) and direct empowerment through conferment of decision making powers to Panchayats. The 73rd amendment does not envisage that parallel institutions be invented to discharge functions even in the guise of a default power, where and when duties are alleged to be not discharged effectively by Panchayats. The correct approach must be to devise ways and means to enable the Panchayats to function effectively, rather than to bring in higher legislators/officials into the system. It will obviously be considered as a regressive step in the march towards strengthening local democracy and striking, at the root of the 73rd amendment. It may not be out or order also to mention that the reinstatement of legislators and officials in the set up in this manner and vesting them with authority on the plea that Gram Sabhas and Gram Panchayats have not worked satisfactorily may even be misconstrued as conflict of interests between the former and the Panchayats.

The comparative success of Panchayat Raj in Karnataka and every step taken towards increased decentralisation has meant a decrease in the powers enjoyed by the legislators.

We thought the governors rejection would be the end of the story. But it appears that every attempt to increase the degree of devolution of power and resources to the gram panchayats will be resisted by those who have a vested interest in retaining power, in that the MLAs are in the forefront.

The irony is that it is these very people who have the power to decide the fate of Panchayat Raj. Albeit, one hopes that, overall, the legislature would do its duty to fulfil the Constitution and abide by its directives to devolve powers to the panchayats.

Meanwhile, the Grama Panchayat Hakkottaya Andolana is alerting current Governor Hans Raj Bhardwaj and the people to the latest moves of the state government.

Nandana Reddy is Director at The Concerned for Working Children, a Karnataka-based NGO. CWC is also presently the state coordinator of the Grama Panchayat Hakkottaya Andolana.