There was a Queen

While documenting the plight and pluck of women, the film captures the everyday lives of young girls and women whose lives could be trapped in a no-exit situation at any moment, without dramatizing this, writes Shoma Chatterji.
21 May 2009 -

"Difficult ethical questions are a part and parcel of documentary filmmaking," says Kavitha Pai who, along with her friend and peer Hansa Thapliyal, were commissioned by Other Media, an NGO that functions in Delhi and Bangalore, to make a film on Women, War and Peace in general, and in particular on peace initiatives by women in conflict-ridden states. The outcome is a 105-minute incisive documentary called Yi As Akh Padshah Bai (There was a Queen) on peace initiatives by the women in Kashmir, in conflict-ridden areas not read much about in the media.

The beginning was uncertain. "We were uncomfortable with the entire premise of the film. We were not sure whether their gender predisposes women to non violence," explains Pai. "At that point, we were not even sure what the word 'peace' meant vis-a-vis our film, the women we were going to research and the life-threatening situations they live and work in. When we first went for the field survey, above everything else, they wished to talk about injustice, the brazen violation of human rights, and their total lack of geographical, social and economic freedoms."

After the first field survey, Pai and Thapliyal went to shoot with a technical crew composed enitrely of women. For all that, the film does not reveal any gender bias. So, alongside the women who come across with very powerful voices, we find the camera closing in on some men. One of them is a former militant; a second man had sent his son for training across the border with his blessings. The third man is a school master who lost his son in gun battle only to realize that he was a militant. The fourth is a schoolboy whose brother was killed in crossfire. And as they spoke to the men, they realised there is a difference in the narratives of men and women.

"While every story in Kashmir has the power to shock and move, and the stories of both men and women were compelling in their honesty, in their rage, in their grief, in their helplessness, in their contempt, in their fierce refusal to forget; the women's stories are markedly different - in their determination to survive, to nurture," Pai elaborates. It is through these women - proud, strong, with an undying zest for life - that they have tried to explore what peace means and how it can come about in Kashmir. There Was a Queen is a film of conflict and peace in Kashmir. It is about Kashmiri women who talk openly about terrorism, militarism, peace and their daily life. It is a record of political voices of women representing many sides in Kashmir. 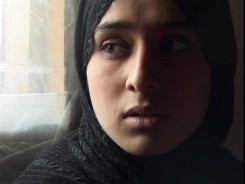 A still from the film.

•  The trouble with Eden
•  Kashmir: Another view

While documenting the plight and pluck of women, the film demonstrates the uncertainty the everyday lives of young girls and women whose lives could be trapped in a no-exit situation at any moment, without dramatizing this constant risk. A young girl learning tailoring in the Zainab Skill Centre in Maisuma in the heart of Srinagar, is being teased by her friends for wearing lipstick. She says, "Who knows whether I will remain alive tomorrow? So, why not fulfill my desire and have some fun while I am alive today?"

The Zainab Skill Centre was established around 1991-92 to provide support to girls affected by conflict. The centre was founded by Agha Ashraf, father of the late Kashmiri poet Agha Shahid Ali. It is run with donations from non-resident Kashmiris. Kavitha says that every girl here has lost a brother, father, husband, son or some male member. "Their smiling faces say that this is nothing extraordinary for them. They dot their stories belting out lines from popular Hindi film songs, sometimes lamenting when this onslaught would finally end," Pai adds.

The crew reached Sopore two days after two young girls Shahnaza and Ulfat, both 17, studying in pre-university were killed. Kavitha Pai says that they did not wish to shoot the funeral of the two girls because it would be intruding into very private moments of grief. "But the family insisted that we do, because they wanted the rest of India to know what was happening in Kashmir. As one of the dead girls was being bathed by her wailing mother, I could not bear it anymore and Hansa took over. 'Did you see the mehendi in her hands' Hansa asked me afterwards. I hadn't because I felt guilty in some way," says Kavitha.

Hansa was stronger. "My predominant emotion was rage, which made me place the horror, the shame and the sorrow of it on record, for all to see," says Hansa. "So I shot the mothers bathing their little girls, stroking their seemingly unscarred bodies, gently combing their hair and kissing their fingers," she adds.

A year later on the editing table, they debated whether they should use the funeral footage at all because it was too sensational and too intrusive. "We finally decided to keep three shots to drive home the gravity of the crime - the murder of two innocent girls," Pai points out. Some said they were killed in crossfire while others said it was the Indian army who were responsible. In the end they decided it did not matter who had ended the lives of these children; what mattered was that two innocent girls had been killed, just when their whole life was about to unfold ahead of them. 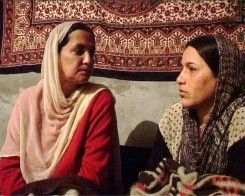 Parveena, one of the founders of APDP and Taheera, a member.

The documentary not only traces the plight of the women, but also shows the video footage of the movement of the convoys of security forces personnel in busy areas of Srinagar city. Parveena Ahamgar, whose son is missing, and Parvez Imroze, a lawyer who works in the area of human rights founded the Association of the Parents of Disappeared Persons (APDP) in 1994. The APDP is an important initiative by women towards bringing peace in Kashmir. Tasleema Bano, a resident of Malangam-Bandipora and a member of APDP says how her husband was picked up some years ago, and has never been seen or heard of again.

Women who have lost their near and dear ones are united in carrying forward a joint struggle, demanding the return of their missing husbands, sons, brothers and fathers. "If they are dead, give us their dead bodies so that we can give them a decent burial," says one woman. These women are neither involved in the political issues that plague the state, nor are they part of militant groups. Their tragedy is that the male members of their families have been picked up either by militants to join the movement for Azaad Kashmir, or by the security personnel, or by the Indian Army.

Hajra has lost four sons. Yet, a ray of hope keeps this old, frail, but brave woman get on with the business of living. She says that conceiving a situation of peace is impossible in an environment where guns keep roaring and where women lose their dearest ones, taken away by the security forces, never to be seen again. The camera closes on the wrinkled face of Ghulam Rasool Paddar, father of Abdul Rehman Paddar, killed in an encounter (a 'fake' encounter, says the father) at Ganderbal.

While many voices are anguished, some are vengeful and harsh too, and the film does not overlook these. At one point in the film, we see a young girl who is ready to take up arms to avenge the killing of her sister by the security forces at Sopore. Her mother echoes this, proclaiming she would take up arms so as to "eliminate" the security forces personnel.

"Deploying the army in civilian areas only perpetuates the cycle of violence, strengthens peoples' conviction that they have been colonised," says Pai

•  The trouble with Eden
•  Kashmir: Another view

The film pans through extensive interviews, the nature of crackdowns carried out by the security forces and how the women cope with the situation once the security forces cordon a given area. Naseem Shifai, a famous Kashmiri poet, says that it is necessary to remove the stigma of every Kashmiri being labeled a militant by the rest of India. Hameeda Nayeem, reader in the English Department of the University of Kashmir claims that every Kashmiri should be given the right to self-determination, and asks why the militants would kill their own people.

Misra, one of the men interviewed, who lives in Malangam, said that more appalling than the indifference of the State was the tragedy of the Kashmir leadership abandoning the families of those they call martyrs. "Some of them seem to have seen the light after the Amaranth protests last year when there was a consolidated attempt by some parties to give compensation to the families of those who had died in the firing, to pay for medical aid and for the education of the children. But given the scale of devastation as a result of the 20-year-old conflict, much more needs to be done," he said.

There was a Queen leaves us with strange feelings of shock and guilt - shock because of the meaningless death and disappearance of hundreds of people, and guilt because so many of us have done nothing to help these women who are trying to carve out pockets of peace in their disturbed lives. The conflict has created a large number of widows, 'half-widows' (those whose husbands have disappeared), mothers who have lost their sons, daughters who have been subjected to rape, women pushed out of employment and people suffering from acute stress and trauma. The sheer banality of such acute suffering is striking, throughout the film.

The film ends with the recent protest demonstration by the parents of disappeared persons at Jantar-Mantar in New Delhi. The scene is ordinary, by the standards of high emotion elsewhere in the documentary. But its ordinariness also captures the everyday nature of the pain that people live with, and the alternating realities of intense conflict and peaceful democratic protest.

Dr Shoma Chatterji is a freelance writer based in Kolkata, and a member of the Network of Women in Media in India.