Demand for the randani roti, a staple of Dalit cooking in Central India, has risen steeply in recent years, and today the roti is the hub of a thriving small-scale industry. And alongside the mainstreaming of their food, Dalits are finding a rare escape hatch from their economic woes too. Aparna Pallavi reports.
03 November 2005 -

Elderly Satyabhama Bai Bhagat takes a scoop of slimy dough, stretches it over her arm, and drapes a diaphanous layer sizzling on a hot, greased pot in a single, highly skilled move. "This is not like the work I have done all my life. This is my own thing -- it has a face," she remarks with a smile whose beauty has been forged from a life-time of struggle. Satyabhama, who spent most of her life as an agricultural or construction labourer, is today the proud head of a family business that she runs from her half-constructed house on the Ring Road. The sign-board over her modest, front-less shop says, "Randani Roti, Rs 55 for a paili."

Satyabhama is one of the nearly 1,000 odd lower-income group women of the Dalit community who have found a way to live and work with dignity through a unique delicacy, part of the traditional culinary art of the community -- the Randani Roti. Known by various names like lambi roti, matka roti or manda, this crisp and glutinous bread, which resembles the South Indian dosa in taste and appearance, has come into the limelight in Nagpur city in recent years as a commercial option. The demand for these rotis, a celebration food traditionally eaten with accompaniments like mutton curry, mango juice or patwadi chi bhaji (a curry made out of steamed cubes of gramflour) has risen steeply in recent years, and today the Randani roti is at the hub of a virtual small-scale industry, run almost entirely by lower-income group Dalit women. 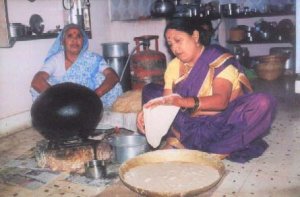 "Till the 1980s hardly anyone outside the Dalit community had heard of the Randani Roti," says Dalit activist Nalini Somkuwar, "The roti was also losing out on popularity among the affluent sections of the Dalit community because the educated women no longer knew how to make it. It was first introduced outside the community in the late 1980's in Nagpur, when due to the active women's movement, the interaction between Dalit women activists and activists from other castes grew. The idea of commercialising the preparation of the roti arose just about five or six years back."

Initially, when the Randani roti came into prominence, there were frantic efforts by moneyed business persons to grab the trade. Food festivals were organised around this delicacy by big names in the hospitality industry. In areas like Indora, systematic networks of middlemen started paying women daily wages to make the rotis, or buying ready-made rotis for a pittance and selling them at exorbitant prices.

"One man came to our area and said that he would be needing something like 500 rotis every other day," says Surekha Wargantiwar, who works from her own home now, "He roped in several of us women, but he added the condition that we must work exclusively for him." Fortunately, the issue was raised in a meeting of a cluster federation of self-help groups, and the dangers of such a proposition were discussed. "Then we told the man that we would supply him what he wanted, but will also supply to others."

The making of the Randani Roti is an interesting and highly skilled process. The flour for this roti has to be ground specially to a coarse consistency. The dough is mixed to thick, pouring consistency and allowed to ferment till it swells into a slimy mass. This mass has to be lifted by hand and slapped down repeatedly for a long time to make it sufficiently pliable for the rotis to be made. Once the dough is ready, a portion of it is stretched over the arm and allowed to hang down. This drawn mass has to be transferred to the oiled, heated surface of an upturned earthen pot (randan) at just the right moment, and baked. The entire process takes less than 30 seconds. The result is a crisp, perforated, dosa-like bread, which can be eaten hot, cold or nine (actually three) days old according to your preferences.

An alternative process also exists among the poorer sections of the Muslim population in Nagpur, most of whom are second or third generation Dalit converts. Called Manda, it is slightly thicker than the Randani Roti, and is made on an upturned kadhai (round-bottomed pot with handles). The Muslim community has not made any efforts to market this preparation.

"Thanks to the vibrant Ambedkarite movement in the city, the awareness rate is high among the Dalit women," says activist Shobha Dhargave. Very soon the women rejected the middlemen and started their own manufacturing and supply networks. This was beneficial in two ways - first, the women began to get better returns for their labour and skill, and secondly, the prices dropped, attracting more customers. "Earlier, I used to earn Rs.70 for a whole day's work (anything between 10 and 12 hours). Now, making and selling rotis from my house, I earn that much in three hours," says Bheema Bai Watthi.

"These dalals used to sell each roti for Rs.10," says Yashodhara Meshram, "Now we sell rotis of one paili (traditional measure, slightly more than 1 kg of wheat, which comes to around 25 rotis) for Rs.55-65. The cost of material, including wood, wheat and edible oil is about Rs.25-30. So we make a good profit." "And when we do work at functions, we charge by the paili, not on a daily wage basis," adds Nalini Karwade. The current rates are Rs.20-25 per paili of rotis made, plus conveyance.

A 'plate', consisting of two rotis and mutton curry or patwadi bhaji can be had for Rs.15-20. Single rotis can be had for Rs.2 or 3 each. Another advantage of women taking the trade into their own hands is that the original method of making the rotis has been retained. While mass manufacturers tried to introduce LPG, the women continue to make the rotis the traditional way, over a wood fire. A new, faster and fuel-saving technique, in which the fire is lit inside rather than under the pot has also been evolved by the women themselves.

Realising the potential of the new trend, Dalit women's activists also intervened, and started organising the women in the trade into self-help groups. At this time there are an estimated 70-odd SHGs involved in making and selling Randani rotis in the city. Other women, in informal groups or singly, are also engaged in the trade.

"Incomes from the trade vary," says Shobha, "Some women run their entire households on the income from Randani rotis. Others do this work on the side with their other professions -- mostly domestic work. Many have given up domestic work for this work."

Says Hirabai Khobragade, a former domestic servant, "Orders are irregular, but they are rising. As domestic servants we earned Rs.1000-1500 a month after long hours, many of which were spent commuting on foot. Now we earn the same amount, but in lesser hours, and at home."

And business is looking up, stoking hopes for higher incomes in future.

"When I started the shop I used to get orders for 4-5 pailis a day. Now it is never less than 10-12 pailis," says Satyabhama. "The demand is high in the Dalit population. The upper castes don't yet accept this cuisine at the family or social levels, but at stag parties where meat is eaten, the popularity is high. Stalls selling Randani Rotis have received good response at several craft fairs in the city in recent years," says Nalini.

It is interesting to notice that the women are very possessive about their art. "We don't supply to hotels, says Hirabai Khobragade. "What we say is, you want to eat our food? Come get it from us." "Even if the hospitality industry starts taking interest in Randani Rotis, we will not work for them. We will supply to them, and we will also monitor the prices," says Vishakha Deshbhratar, a young post-graduate in economics, who works with the Sakhi SHG in South Nagpur and dreams of one day starting a cooperative hotel serving these rotis.

"The arts of the Dalits," says Nalini Shomkuwar, "have mostly been hijacked by the upper castes -- especially our musical traditions like Lavni and Kolhati dance. But the Randani Roti is an art that can't be hijacked. The work is so hard and so highly skilled, that affluent people -- Dalits or otherwise -- don't want to learn it. It is something that is ours, and as long as we are careful not to play into the hands of big money, it will remain with us."