Held in Geneva last month, the Rotterdam Convention was attended by 500 participants from 140 governments, UN organisations, and NGOs. India sided with Canada and few other nations to prevent the listing of chrysotile asbestos, a known carcinogen. R Sridhar has more.
01 November 2006 -

In the global environmental scene, India has once again demonstrated its collusion with asbestos interests. In October, India's delegation to the convention sided with a few other nations to virtually bring down the Rotterdam Convention, an international treaty intended to protect developing nations from toxic trade. The third Conference of Parties (COP-3) to the Rotterdam Convention was held in Geneva, Switzerland during 9-13 October 2006. It was attended by 500 participants from 140 governments, UN agencies, intergovernmental organizations and non-governmental organisations. 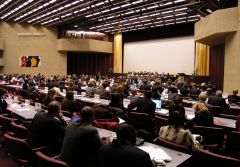 The Rotterdam Convention, also known as the Prior Informed Consent (PIC) Treaty, is a multi-lateral environmental agreement designed by the United Nations Environment Programme (UNEP) and the Food and Agriculture Organisation (FAO). The treaty aims to protect vulnerable populations, including industrial workers, especially in developing and under-developed countries by ensuring that hazardous chemicals added to the Prior Informed Consent (PIC) list can only be exported with full disclosure and documentation. This is expected to provide for a national decision-making process on their import and export, including its possible safety regulations and encourage the adoption of safer alternatives. The treaty came into force on 24 February 2004, and as of now there are 110 countries that have signed, ratified, accepted or acceded to it, including India. Asbestos was the key issue in discussion at the Convention this time.

The Secretary-level delegation from India was led by Naresh Dayal, Special Secretary, Ministry of Environment and Forests and Kumaresh C Misra, Joint Secretary, Ministry of Chemicals and Fertlisers. The Indian delegation played a significant role along with a few other countries including Canada, Ukraine and Kazakhstan to stop the listing of chrysotile asbestos, a highly toxic material, into the Prior Informed Consent (PIC) List of the Convention. Inspite of 95 per cent of the countries demanding that this material be included, and the Chemical Review Committee (CRC) of the Convention going through a detailed scientific review process, to recommend its inclusion, the COP-3 failed to list this and deferred the decision to the next COP-4 in 2008. This deferral for two years, triggered by economic and political motives, is seen as a serious and unprecedented setback to this much-regarded global environmental regulatory initiative.

As noted in earlier articles on India Together, chrysotile asbestos is a known human carcinogen which represents 94 per cent of world asbestos consumption. Once used widely as an insulating and fireproofing agent in buildings, ships and consumer products, asbestos has been shown to cause cancers of the lung and other organs as well as breathing disorders. The World Health Organization estimates at least 90,000 people die every year from asbestos-related diseases. In India, Asbestos-Cement sheets are widely used for roofing and the material is also used to make pipes for public water supply. It was only recently that the controversy relating to asbestos-waste laden ships docking in the Indian waters for ship breaking came to public light. The Government of India's non-opposition to such hazardous trade and industrial activities was exposed during this controversy.

Inspite of 95 per cent of the countries demanding that chrysotile asbestos be included in the Prior Informed Consent list, after a due scientific review process, the COP-3 failed to do this and deferred the decision to the next COP-4 in 2008.

A proposal for a majority vote for decision making was sternly opposed by India and a few other countries, thereby forcing consensus to be the only way to decide on the listing issue.

At the COP-3, Canada, a major producer and exporter of Chrysotile Asbestos led the opposition to its inclusion in the PIC list. India's objection to the inclusion seemed to be largely due to concerns that tighter trade rules would lead to pressure for stricter domestic regulations. It also had concerns that there weren't any substitutes. From a public health perspective, especially considering the abysmal environmental performance of its domestic industry, this position taken by India was preposterous, because it was led by two fundamental misguided assumptions. One, that enlisting Asbestos into PIC would lead to its ban, and two, that it may have to ensure domestic regulations aiming at protecting public health.

India refused to see that the convention was very clearly about enabling the 'monitoring of trade in certain hazardous chemicals' and that 'it is not a recommendation to ban the global trade or use of specific chemicals'. The UNEP in its statement reiterates that 'this (convention) gives developing countries in particular the power to decide which potentially hazardous chemicals or pesticides they want to receive and to exclude those they cannot manage safely'. This puts the onus on the exporting country to ensure that such enlisted products do not get exported to countries that have made a decision not to accept it due to domestic regulations or safety concerns. It also ensures that unauthorized trade of toxic materials does not happen, and puts a check on possible accidents and tragedies.

The Chair of the COP-3, Yue Ruisheng (China) while stressing the importance of action on chrysotile asbestos, was seen repeatedly reminding the delegates that the listing of a substance on PIC list was not a ban on global sales but a provision to enable countries to make informed decisions on chemical purchases.

This was the third time that an attempt to mandate an information exchange on chrysotile sales had been proposed and defeated, by simply disregarding majority concerns as well as science, human and environmental concerns. Currently, there are only 39 chemicals listed in the convention, including 24 pesticides, four severely hazardous pesticide formulations and 11 industrial chemicals. In the last two years not one chemical has been additionally added. This inaction at the Convention has raised much doubts regarding the future of as many as 160 chemicals that have been proposed for including in the PIC list by various nations.

One of the expectations of enlisting a hazardous material in the PIC list is that information exchange on chemicals will promote countries to look for safer alternatives. India's argument that there is no safer alternative to chrysotile asbestos was also inappropriate. The WHO International Agency for Research on Cancer and Chrysotile Asbestos has reported that safer substitutes exist, especially for asbestos cement products in developing countries.

Alternatives to chrysotile are available in PVC and sheet metal for substitution in asbestos cement. However, PVC is not recommended as it is also a hazardous compound. Substitution of asbestos usually involves the use of other fibres in the place of chrysotile. There are materials like fibre cement which can be used for roofing, and other building purposes. The major asbestos-cement product categories worldwide are profiled sheet, flat sheet, and building board, slates, pressure pipes, and moulded goods. Compounds like p-aramid, polyvinyl alcohol (PVA), and cellulose fibers are most commonly used as substitutes, particularly for sheet and slates. Many countries that have banned chrysotile asbestos have moved to safer compounds. 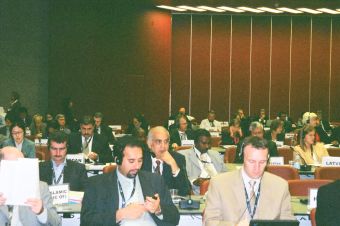 At the Convention: Kumaresh C Misra (centre, with hand on the chin), Joint Secretary at the Ministry of Chemicals and Fertilisers, was one of the leaders of the Indian delegation. Pic: R Sridhar.

One of the objectives of the Convention is to help countries shift to safer compounds without actually going for immediate bans, by using a domestic phase out period or other regulatory systems. All of this was blocked by the intransigent of India and a few other nations.

The WHO also says that this use of asbestos cement is of particular concern because of the difficulties to control exposure, especially to large populations of the workforce and even larger populations using the material. India, particularly, has a huge problem with its unorganised sector exposed to this material and its cement-asbestos factories, proving to be a regulators night-mare. Yet, with the position that it took in the COP-3, India announced globally that it was not even willing to look for safer alternatives, and that it was not interested in information exchange with the objective of protecting public, workers and environmental health. Thus, even as countries all over the world are moving forward, and Indias retardal actions at the Convention amounts to serious backtracking from global commitment to stop toxic trade.

Earlier in the Convention, the groundwork for this failure was laid when a proposal for a majority vote for decision making to be used when all attempts to arrive at a consensus fail, was sternly opposed by India and a few other countries. In doing so, India and the pro-asbestos nations forced the sense that consensus should be the only way, even at the cost of decision making priorities. Now, the world has to wait for two more years, when chrysotile asbestos would be brought for listing again in 2008 at the COP-4, along with two other chemicals Tri-butyl tin and the pesticide Endosulfan. But with the present mechanism of decision-making, the polluting industries interest group is expected to succeed again in obstructing this global regulatory system.

Some of the arguments raised against the listing were outrageous. The delegate from India alleged that the science behind the recommendation to list chrysotile asbestos was not categorical. He claimed that India was undertaking several studies on the hazards of pure chrysotile, and hence it should not be included in the list. And yet, major international agencies including the WHO, ILO and the International Commission on Occupational Health already agree that all types of asbestos cause cancer and other debilitating and fatal diseases. Earlier this year the ILO adopted a resolution calling for the elimination of all uses of chrysotile. Five forms of asbestos - actinolite, anthophyllite, amosite, crocidolite and tremolite - are already on the PIC list.

"A handful of unscrupulous governments have done the bidding of the global asbestos industry and defended the continuing, unfettered sale of a prolific workplace and environmental killer. At least 200,000 workers will be killed by asbestos diseases before the proposal to list asbestos can be tabled again," said Laurie Kazan-Allen, Coordinator of the International Ban Asbestos Secretariat (IBAS), and editor of the briefing paper 'Chrysotile Asbestos: Hazardous to Humans, Deadly to the Rotterdam Convention'.

Asbestos is a well-recognized killer. In the 21st century, there is no excuse for the continued use of such a hazardous material. The deliberateness with which delegates from the Government of India opposed the inclusion of Chrysotile was, to say the least, disappointing. The Indian delegation was accompanied by representatives of India's asbestos and pesticide industries. Brig. A K Sethi, Executive Director of the Asbestos Cement Products Manufacturers Association and Ganeshan, General Manager of Excel Industries (the largest manufacturer of Endosulfan in India) were at the Convention. The Indian delegation was the only one with industry representatives sitting along with the official delegation. This was clear evidence that vested industrial interests influenced Indian position, compromising the common cause of the global and Indian public.

In making attempts to arrive at a consensus, the Chair Yue Ruisheng went to the extent of asking each opposing country to provide clear reasons for their opposition. But in the end, these delegations stood to their positions and defeated the rights of 104 other countries to be informed of the chrysotiles in their shipments. For public and environmental health worldwide and for regulating trade of toxic materials, this is a setback.

R Sridhar is a coordinator with Thanal, an environmental-NGO based in Trivandrum, Kerala. He was at the Rotterdam Convention as an observer and part of the Pesticide Action Network delegation.