Property prices have gone up over the decades, but Mumbai leases land to private interests at rates as low as Rs.7 per sq.m. In the last three years alone, revenue authorities have on average lost close to Rs.48 crores, estimates Shailesh Gandhi.
17 March 2005 -

I felt a deep sense of shame when I read a few months back that since the World Bank had not sanctioned a loan of Rs.17 crores, the pavements in Mumbai could not be repaired. Are we indeed a poor country, or has poverty been thrust upon us? The Maharashtra Right To Information Act (MRTI) has given me some very interesting and meaningful results to this question.

We say property prices and inflation have gone up manifold in the last thirty years. But Khar Gymkhana - a popular and prestigious club in the Western Suburbs of Mumbai is not a witness to this reality. The club has leased out public land and paid an annual lease rent of Rs.60,801 in August 1970, which rose to Rs. 1,03,836 in 1984 and is now down to Rs.55,812! The size of the plot is 8340 sq.mts.

Why do members of elite clubs get 5 star comforts at such reasonable prices? It is because of this citizens' land subsidy to the rich. Under the garb of laws and rules, citizens are being shortchanged by astronomical amounts. Here is an analysis based on the information I received from the Collector, Mumbai Suburban under the MRTI law. The Collector has the authority for common lands in Mumbais suburbs.

The total land given by the Suburban Collector on lease is 9,847,372.84 sq.m., and this fetches a lease rent of Rs.4.04 crores. This works out to a rental of Rs.4.11 per sq.m., per year. But some would say that these leases were originally made out many years back. What can be done about them?

In the last three years, Mumbai suburban authorities on average charged a lease rental of Rs.106 per sq.m., instead of a rental in the range of Rs.1700. The approximate loss in revenues is Rs.48 crores.  •  Assertive citizenship taking root
•  Central RTI law : shine, shackled

When leases are given fresh or renewed, rates that are based on current market values of the properties should be enforced. The average value of land could be approximated to Rs.22000 per sq.m. (About Rs.2000 per sq.ft.) in the suburbs of Mumbai. The lease rate is usually a percentage of the market value. This percentage is close to the interest rates.

If a lease has been given at some point decades back, the lease rent continues to be what was originally fixed until the lease expires. On expiry, the principle of about 7% to 10% of the market value must be used to calculate the lease rent  this is a common commercial principle.

Going by this, the average lease rent atleast for freshly created leases should be about Rs.1700 (about 8% of Rs.22000) per sq.m., in Mumbai suburbs. This is the norm that ought to adopted by public servants' who are appointed to safeguard our interests. To verify the rates being charged for recently issued leases, I used the Mahrashtra Right to Information Act again to get information from the Collector Mumbai Suburban about leases created in the last three years.

The total area of leases given fresh, or renewed is 305757.62 sq.m. for a total lease rental of Rs. 3.24 crores. This means that in the last three years the average lease rental charged was Rs.106 per sq.m., instead of about Rs.1700. This represents a loss to citizens of about Rs.48.7 crores annually! The Rs.17 crores for pavement repair could have come from here. (1 crore = 10 million)

I am giving below a few random cases, which appear to defy all logic: 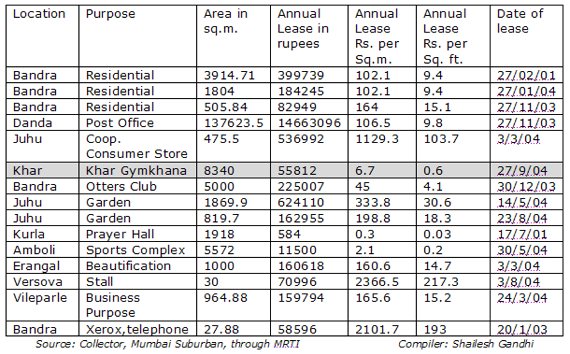 On the high side, the table shows a lease rental of Rs.1129.3 charged on a renewal in Juhu, and over Rs.2300 as well (Versova), in new leases per sq.m. This is some validation of my contention of an average rate of Rs. 1700 per sq.m., even as many others are paying very low rents.

In fact, ruling in 2001 on a PIL (no.102), the Bombay High Court said that public bodies must invite tenders for giving public places on lease, or rent even for periods of a few days.

The case of expired leases is even more bizarre. When leases expire, the land must revert to the public. Listed here below are examples that I compiled using information I obtained using the MRTI Act. Each line represents a firm that originally acquired the lease, but even after expiry, the Mumbai Collector continues to show that the premises are in their name. Many of them are mill firms. 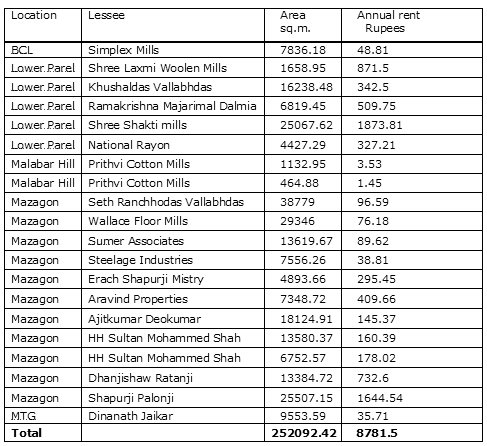 The rental charges per year are again very low. For this sample of expired leases above, the average rent per sq.m is Rs.3.5 paise. (Total rent paid/total leased area). Separately, the Mumbai Suburban Collector has admitted that there 25 such cases.

In Mumbai itself  three authorities  the Mumbai Collector, the municipal corporation (BMC) and the Bombay Port Trust have leased large tracts of our land in their charge. I have asked for information from these authorities and have also requested friends to use the MRTI law across the state to get information from various places. I am sure other citizens will also ask for information on how our lands are being given away by our "public servants".

Every citizen must take up the RTI slogan, 'Hamara Paisa, Hamara Hisab'. (Our money, our accounts.) We must make this a widespread movement. This is money being pilfered from even the poorest citizen, including the pavement dweller and the ones who may even be starving. The common properties belong to the poorest and richest citizens in equal measure.

We the citizens are not poor. Our governments are giving away our commons; our money is being used to support the lifestyles of a few. Government officials argue that they are doing it by various rules and resolutions, and 'in public interest'. The case for stopping subsidies and arbitrariness in public lands is very strong.

Shailesh Gandhi is the Chairman and Managing Director of Clear Plastics Limited, Mumbai. He is also the chairman of the IIT Bombay Alumni Association.

PARTICIPATORY PLANNING : The people and their plans
MORE ARTICLES
on similar topics ...
CITIES