45 km south of Nagapattinam, the 26 December tsunamis washed away thousands of tonnes of stock salt at the Vedaraniam salt pans, filled them with debris and black silt. With government relief coverage withdrawn and the start of the season missed, manufacturers are in despair. Krithika Ramalingam reports.
09 February 2005 -

The salt pans of Vedaraniam (around 45 km south of Nagapattinam) are heavy with their own sense of history. It is still a couple of months to the 75th anniversary of the Salt Satyagraha. It was here on April 30, 1930 that the redoubtable congress leader Rajaji courted arrest, breaking the draconian Salt Law scraping the humble sodium chloride from the pan floor.

The cell that held Congressman and freedom fighter Rajaji is no monument to the salt industry.

Today, a month and counting after the giant waves of tsunami, there is little left in the town celebrated for its defiance of the British but that impression of its past. The tiny cell in a wayside cottage that Rajaji was held captive in doubles up as the regional Government Salt Office. This building stands on the edge of the crystalliser sections of the pans - the most in-land region following the reservoir and condenser - overseeing the ruin that the pans had escaped when the stringent salt laws were in place.

It was off-season for the salt farmers when the tsunami waves swept as far as two kilometres in-land on December 26. The timing of the salt season -- January-October -- ensured that there was no loss of human life on the farms. But in mid-January, the first two weeks of the season start had been missed and repair works on the farms were yet to start in many of the 200-odd small holdings. The monetary and livelihood losses are a cause for concern among the salt farmers.

Salt manufacturer A Vedaratnam's claim to fame is more than just that of the largest individual farmer. He is the grandson of freedom fighter and Gandhian Sardar Vedaratnam, who courted arrest with Rajaji during the salt satyagraha. Post-tsunami, he rides the same boat as the smallest of the farmer in the region - thanks to poor salt seasons, insufficient funds to make urgent repairs, a government unwilling to release any compensation.

Most farmers had stored up to 50 percent of the salt manufactured in their pats after two years of low off-take price, hoping 2005 would bring higher prices. A stock of 25,000 tonnes has been washed away in the tide", says Vedaratnam. He adds that the brine stored during the rainy season in the pits has turned slushy with sea sand and will have to be pumped out. "The force of the crashing waters has levelled the pits and the receding waters left behind ocean debris," he says, listing the devastation from the tidal wave.

Vedaratnams salt pans are on a lagoon bordering the Kodiakarai Natural Reserve Forest. After the tsunami, the lagoon ridge, which separates the fresh water from the saline sea water, has been swept away allowing easy intrusion during high wave. A chunk of his works would become un-farmable if the repairs are not made immediately. 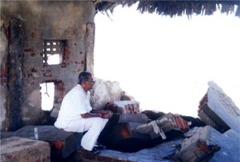 A Vedaratnam muses about the future, amidst the ruins of his motor pump house in his salt works at Vedaraniam.

"The lagoon was a safe, placid place. I will never see it quite like that anymore after witnessing the wreckage the waters had left behind," says Vedaratnam. His 455-acre salt work is still as flat as a desertscape - an expanse filled with debris, brushwood, black silt and despair. And he estimates the damage and cost of delays at Rs. 1.47 crore.

Vedaraniam follows a labour-intensive (around 10,000 people work in Vedaraniams pans alone) traditional salt crystallisation process known as Visagam Brine Stagnation technique. This goes with the topography of the district - the coastal area is at a lower level than the sea - allowing for greater intrusion of sea water during high tide, minimising the use of motor pumps. The sun does the rest of it, condensing and crystallising the salt.

Workers manually flatten the floor with clay and sand to stabilise it. For every acre of salt crystalliser, salt farmers who use ocean water as raw material need to prepare 11 acre of reservoirs. The saline water is then brought in through channels, passing through reservoir, condenser and crystalliser before it becomes salt. En route, gypsum and Epsom are collected as by-products. A lot depends on the preparation of the pits for their proper disposal.

"In Gujarat (the largest salt producing region in India), salt production has become mechanised and the salt is crystallised in factories using the surplus thermal energy. The output from there feeds mainly free-flow salt needs. On the other hand, Vedaraniam is known for its rock salt that supplies both the edible and industrial markets. The labour-intensive production technique uses a lot of natural resources," says Vedaratnam.

To prepare the pans, workers will have to pound the floor to stabilise it. Work will have to begin on raising the boundary walls and in digging pits, repairing pumping motors and desilting the channels. A Jayabalan, Salt Officer in Darangadara Chemical Works, believes these works would cost 10 times the customary seasonal preparation costs of Rs. 2,500 per acre.

Around 2,000 acres of crystallisation ponds have been completely destroyed and another 7,000 acres partially so. The sea water channels have been washed away in many sites", says Jayabalan. He feels that given the massive rehabilitation work, salt production would get going in another two months only if the relief funds are made available immediately.

Government relief for salt makers was withdrawn in March 2004, but the cess was still being collected.

But that could be never, as the Union Commerce Ministry, which is in charge of the Salt Department had scrapped the calamity relief fund from April 2004.

For every quintal that salt manufacturers produce, the government had collected 35 paise toward disaster relief funds, in the event of cyclones or other natural calamities. But that relief has been withdrawn since March 2004 in preference to insurance while the cess was still being collected. Why collect the cess if the government cannot help salt farmers in the hour of crisis? wonder salt manufacturers.

With salt making being a low turnover industry, the insurance premium rates are quite steep and out of bounds for most of the small farmers. Also, the loss already sustained could be a crippling blow if adequate compensation were not to follow.

The third largest of the salt producing regions in India - after Gujarat and Thoothukudi (in Tamilnadu) - the Vedaraniam pans have already missed the start of the production season. The 5 lakh-tonne-capacity-salt-pans continue to wear a deserted look except for the occasional, hopeful and well-heeled manufacturer who is back preparing the pans every passing day with fears of more silence from the government.

Salt commission officials could not be reached for comment.