Reaching the unserved in cities

The failure in India is the major reason why the UN cannot meet the Millennium Development Goal of halving the 2.6 billion in the world without sanitation by 2015. South Asian countries resolve to try harder. Darryl D'Monte reports.
18 April 2011 -

A major South Asian conclave on sanitation known as SACOSAN took place in Colombo during 4-7 April. This was the fourth in a series, which began in Dhaka in 2003. Among other issues, the conclave showed that the national sanitation data put out by the Joint Monitoring Programme, consisting of UNICEF and WHO, is considerably more alarming than official figures, particularly in the India Country Paper issued by the government.

The failure in South Asia in general, and India in particular, is the major reason why the UN cannot meet the Millennium Development Goal of halving the 2.6 billion in the world without sanitation by 2015. SACOSAN reiterated the resolve of South Asian countries to get their act together, including enforcing the UN right to water and sanitation.

As it happens, the India WASH Forum, consisting of NGOs and individuals working in this sector, had held a day-long consultation on "Water and Sanitation Challenges and the Urban Poor" last December, and the draft report of that event has just come out. It throws considerable light on sanitation in cities in this country, which is in many ways a more intractable problem than rural situation, given the fairly rapid rate of urbanisation and high proportion of slum dwellers.

The report refers to how the government rated cities by their progress, or lack of it, in sanitation in 2010. The 423 cities under the scanner had four categories, measured under various parameters. Not a single one made it to the Green 'best' category. Only four made it to the next best Blue category: Chandigarh, New Delhi Municipal Corporation, Mysore and Surat.

As the report underlines, "The rest of the sample fell into the last two categories, of which 159 cities fell into the worst, or 'Black' category. In this survey, the city authorities had carried out a self-assessment and assigned scores to their own services as positively as possible, but still had been unable to achieve a score of 33 points or more that would have lifted them out of the 'Black' category. Officially, access to piped sewerage stood at about 33 per cent of the population; in fact, that number was probably closer to 20 per cent, as even where lines have been laid in many places, they have not been connected."

In his keynote address, Arun Mehta, Joint Secretary, Ministry of Urban Development, mentioned that the 13th Finance Commission would allocate five times as much for sanitation in the 12th Five Year Plan as in the previous plan. However, he was candid enough to admit that the expenditure of government funds by itself would not make all that much of a difference. For instance, to get rid of solid waste, which is one parameter for benchmarking urban sanitation, cities kept asking for more trucks and bins. Two years later, these trucks and bins seemed to have 'disappeared', with no clarity what happened to them. Obtaining results is more a matter of a culture of providing public services, and not merely spending official funds.

In any case, the government was unable to provide the resources to meet urban sanitation targets. A McKinsey study had estimated that the country needed something in the region of US $2.3 trillion (approximately Rs.1 lakh lakh crores) for both rural and urban sanitation over a two-decade period, and the Confederation of Indian Industry had estimated an expenditure of Rs.50 lakh crores needed over a decade. The Centre and state governments couldn't possibly provide funds on this scale, and cities must think of their own solutions.

From experience, professionals working on this all-important sector - which accounts for the largest number of deaths in the country: 780,000 die of diarrhoea every year, more than from TB - believe that it is as much a matter of "software" or generating demand for toilets, as hardware or simply providing taps and toilets. In other words, social engineering as much as conventional construction. In many rural areas, including Haryana, which has the worst sex ratio in the country, women were at the forefront in demanding the installation of a toilet in their homes.

In cities, there could even be pay-toilets, on the lines of the Sulabh Shauchalayas. In a slum, residents could be given family passes to use these toilets at a concessional rate, while casual users would cross-subsidise the use. The problem in cities like Mumbai, with the most slum dwellers of any city in the world (almost 9 million), there is often no place to build a toilet, even if the residents were ready and willing to have one. 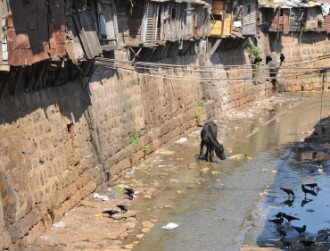 Professionals believe that it is as much a matter of "software" or generating demand for toilets, as hardware or simply providing taps and toilets. In other words, social engineering as much as conventional construction.

•  A model for sanitation
•  Taking stock of watsan

The consultation provided insights into specific city case studies. Hyderabad has a third of its 6.4 million population in slums (while Mumbai has 60 per cent). Piped drinking water supply (368 km in length) is available for 60 per cent of the population, and this is supplemented by 2131 drinking water supply public stand posts. Sanitation coverage, with sewer lines 672 km in length, and storm water drains of 602 km, is available for about 55 per cent of the population. In one slum, Bholakpur, residents paid Rs.1500 every year to obtain water in summer, which obviously reflected the poor condition of toilets there.

According to Venkatesh Aralikatty, a consultant with Hyderabad-based Modern Architects for Rural India (MARI), which conducted the study, "The problem was especially acute for the slums which had not been notified. Grievance redressal was poor. While willingness to pay user charges was high if quality and continued supply was maintained, there was poor recovery on the part of authorities, which then led to a lack of accountability on their part. A hide-and-seek situation resulted, with authorities of the opinion that as long as the residents did not pay, they were not entitled to quality services.

"With respect to sanitation, open defecation and urination tended to be common in slum communities, as space constraints limited toilet coverage. Those people who used public toilets spent an average of Rs.720 per person per year, and women, who were charged Rs.2 as against Re.1 for men for the use of urinals, tended to pay more than men. This aspect, combined with others like poor maintenance and security, male caretakers and lack of separate entrances, meant that women constituted only 10 per cent of the user group of public toilets.

Officials tended to be apathetic about clearing old clogged sewer lines, and there were no proper systems for garbage clearance, because of which garbage tended to be dumped at crossroads. Willingness to pay was less for solid waste disposal, with the system of door to door collection of garbage with tricycles for a payment of Rs.20 per month being unacceptable to the community."

Pratima Joshi, Secretary of Shelter Associates, Pune, an NGO consisting of architects, had resorted to the novel use of Geographical Information Systems (GIS) to map slums (see this earlier article). Nashik is an example. There, the City Development Plan listed 104 slums. The first discovery from the independent inquiries, using GIS mapping and data from Google Earth, further verified by physical means, made by Shelter Associates was that there were 159 slums in the city, which were home to 35,000 families. However, the slum development authorities had not yet accepted the figure.

As the report cites, "Joshi speculated whether Nashik could be a city with completely individual toilets for two reasons. Firstly, the city had built a fairly extensive sewer network. Even in the case of dwellings built with tin panels beaten out of biscuit tins, the families had identified tiny spaces for toilets because they did not want to queue up in front of community toilets. Joshi said that the 65 slums for which Shelter Associates had done the rapid appraisal were home to 45 per cent of the city's poor."

Perhaps the most shocking findings in the report as a whole pertained to case studies of public toilets in cities. On behalf of the well-known NGO, Gramalaya in Tiruchirapalli, Dr S. Prabhakar presented a study on the access of the urban poor to water and sanitation in three slums of Salem and Erode in Tamilnadu. By Mumbai standards, living conditions in these slums are not all that bad. However, the researchers found that as much as 62 per cent of the residents suffered from diarrhoea and 58 per cent from worm infestation.

"With respect to access to sanitation in public places, a survey of the facilities in the bus station, railway station and main market in the two cities was made. There were separate toilet blocks for men and women in all six locations, details of which are given in the table below. In the bus stations alone there were around 1000 to 2000 users on an average every day (in Salem, for only nine toilets each for men and women). The latrines, bathing space and urinals are not proportionate to the number of people using them daily. Seats were insufficient in all the cases. Water and electricity for the facilities were supplied by the government for an annual cost.

"Convenience for the general public was not a major concern as generally, toilets were located at the most inaccessible place, in the remotest corner of the public space. Public ratings for the facilities also indicated the dissatisfaction. Availability of water was rated as 'Below Average', while accessibility & visibility and maintenance of toilets were rated as 'Poor'."

The participants at the consultation were shown a documentary titled Water and the City by Swati Dandekar, which dealt with Bangalore. The city only receives half its daily need of 1000 million litres. Even veteran former government officials and NGOs present were surprised to find out that while a kilolitre of water costs the Bangalore Water Supply and Sewerage Board Rs.34, the consumer pays, on average, just Rs.18. However, when the poor or people living on the fringe of the city buy water by pot or tanker, the price goes up to Rs.300.