Firdaus Ahmed deconstructs the various levels of state and individual dynamics that have led to India’s recent military doctrine of ‘disproportionate response’, as evident in various instances of encounters and killings, including the recent crackdown at the Myanmar border.
18 June 2015 -

Early in June, retaliating to an ambush that accounted for eighteen of its comrades in Manipur, the Indian army struck two militant camps along India’s border with Myanmar killing an indeterminate number of militants. 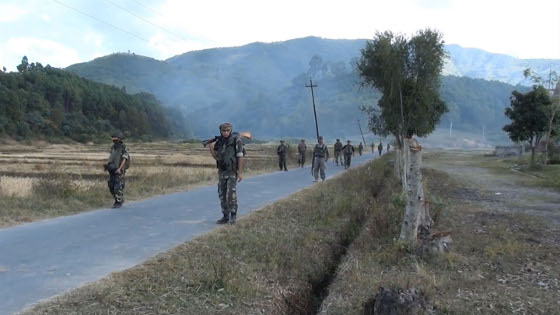 Army patrol in a village in Manipur. Pic: Anjali Nayar (India Together files)

A day earlier, the central police and Jharkhand police claimed a rare success against Maoists when they killed twelve alleged Maoists. Of the seven identified casualties, six turned out to be youth with no criminal record.

In early April, the anti-red sanders smuggling task force of the police in Andhra Pradesh killed twenty alleged smugglers in what was later revealed to be a palpably staged ‘encounter’.

In the same week, the Telangana police killed five ‘Islamists’ in custody, in retaliation for the deaths of three policemen in an encounter with alleged members of the Students Islamic Movement of India (SIMI) in Nalgonda, an encounter that incidentally had also taken the lives of two SIMI members.

So, what do these otherwise unrelated incidents from various areas in India have in common?

The link between all three is the adoption of what is being termed as a doctrine of ‘disproportionate response’. This came to fore last year when the Modi government cancelled the resumption of talks with Pakistan and engaged in bouts of firing along the Line of Control. Busy bodies concerned spelt out that India would respond with a ‘befitting lesson’ in order, as PM Narendra Modi had told his audience at an election rally once, ‘to shut their (Pakistani) mouths’.

Accused of going to the press with unprecedented details of the Special Forces operations on the Myanmar border, media friends of the government have let on that it was by design, for ‘messaging’. Deterrence we are told requires ‘communication’ to the other side of ‘resolve’. This is best demonstrated, rather than merely said. What the instances recorded here have in common, therefore, is that they fall in the category of ‘messaging’ through ‘doing’ – the government’s version of ‘propaganda by deed’ - with deterrence being the purpose stated out loud.

Deterrence is to dissuade the other side from doing things which the government does not want them to do – such as break the law - by increasing the costs of such acts to an extent that make them prohibitively expensive, and thereby unthinkable. This is a legitimate end. One would think robust fences are enough for this. Deterrence does not require ‘disproportionate response’. So, where does the ‘new’ doctrine come from?

A doctrine has origin at four levels; these lie in a state’s strategic environment, the politics at the state level, institutional level dynamics within the state, and, finally, at the individual level in doctrinal entrepreneurs.

India’s strategic environment has not been as stable as now in the last three decades. Pakistan is internally beset. It has kept its fingers off Kashmir for over a decade. India and China are both courting each other. The US is India’s principal arms supplier and strategic partner. PM Modi’s globetrotting has served to knock on the great power door. This increased engagement leads India to emulate great power behavior.

The resonance of global strategic culture can be traced in its military doctrines. It readily borrowed from the US expansive doctrine of preemption as it was first trotted out by ‘Dubya’ Bush, with George Fernandes and Yashwant Sinha arguing that India had a more plausible case for preemptive strike against Pakistan.

India’s  nuclear doctrine of February 2003 emulated President Bush’s National Security Presidential Directive 14 of June 2002 in which he had explicitly extended nuclear weapons response to cover chemical and biological weapons use against the US. This put a caveat on India’s No First Use pledge, diluting what it trots out usually to prove that it is a responsible power.

Finally, India’s deep and growing Israel connection – now visibly flaunted in the visit of the Israeli defence minister – cannot but find doctrinal expression. Israel’s action in Gaza resulted in a Palestinian death toll 30 times higher than the Israeli casualties. The ‘disproportionate response’ inflection in doctrine can thus easily be traced to the influence of the current day drift in global strategic culture.

At the second level, that of the state, the receptive environment in India has been created by the return to power of the NDA, this time led by Modi. This is best illustrated by the tweet by a former colonel and now junior minister in his government, after the recent army operation, harking back to the prime minister’s election-time ‘56 inch chest’ formulation.

The hyper-nationalist strategic plank has merged with the Hindutva worldview, resulting in a revision of India’s supposedly ‘reactive and defensive’ doctrine to one that is ‘proactive and offensive’ and now headed towards ‘disproportionate response’. In their view, it helps overturn a thousand years of humiliation and returns India to the front ranks of world powers. Besides, hopefully, the accompanying bombast will yield electoral dividend in the upcoming Bihar elections. ‘Acche din’ not much in evidence, national morale requires buoying by other means.

Within the ‘box’ of the state, is the bureaucratic level at which the military is increasingly salient. While a strong military reply to an ambush is entirely unexceptionable, traces of Americanism can be seen in its press statement: ‘any threat to our security, safety and national integrity will meet a firm response’.  It is not apparent from the statement whether the ‘safety and security’ refers to that of the state or the army.

This is suggestive of a psychological slip wherein the army’s concern for safety of its members – a post Vietnam American fixation - precedes that of its fellow citizens from whom a threat is perceived to emanate. It also completes the loop, tying the third level – organizational - with the first – international – in the military’s increasing interface with the US and Israeli militaries. The difference that seems to escape the army, however, is that these two militaries are not fighting fellow citizens.

Finally, there is the individual level, at which Ajit Doval, the National Security Adviser (NSA), figures most prominently on account of his hagiographers in the nationalist media. His year at the helm of India’s national security bureaucracy has only strengthened his already highly impressive profile as a great tactician, acknowledged by the award of Kirti Chakra. Unfortunately, he is in a job that requires strategic forte instead.

For the first time, Pakistan’s army has already expressed its annoyance with alleged Indian fingerprints over its Baloch predicament. It is no wonder then that though the army raids were in Manipur, the bombast was directed more towards Pakistan. It will not take ISI long to figure out that an opportunity exists for payback.

China has also figured among the alleged benefactors of the militants, identified by Mr. Doval way back in 2011. With two adversaries potentially advantaged by a downturn in security in the North East, strategic sense is to deny them a handle.

It was easy to see that the breakdown of talks with the NSCN (K) in April would have had military repercussions. It would have been strategic to keep the Naga negotiations on course. The previous government’s inability to cap a decade and half of talks after eighty rounds of talks is easy to understand, given its ineffectual record on almost everything else.

The current government relying on its nationalist credentials had intended late last year to wrap these up in eighteen months. Instead, it appointed a known sceptic of the talks, R N Ravi – former Kerala police cadre and IB colleague of the NSA – as lead negotiator.

India’s capacity to tackle any further unravelling of the cessation of operations processes can only be at the cost of its assiduously created mountain strike corps, that can willy nilly get sucked into counter insurgency even if intended for the China front. More significantly, it will be at a price that only the common man in the North East shall pay.

The government’s approach to the doctrine is therefore not based on strategic coordinates as much as on its ideological predilections and the individual narcissistic tendencies of Messrs Modi and Doval.