The women of Gunduribadi, a small tribal village in Odisha, go out daily for thengapalli or forest patrolling around their village. They are also members of their Forest Protection Committee which decides how to manage the forest and its resources. Sonali Pattnaik spent a day with them.

It was just another day at Gunduribadi village, a tribal village of 27 households situated in the foot hills of the Saata Bhai (a series of hills/mountains) at Ranpur Block of Nayagarh District, Odisha.

Janha Pradhan and Sarojini Pradhan, two women of around 45 years, come calling upon other women of the village to gather at the end of the main road. Soon ten women in the age group of 30 to 60 years gather near the temple of their main deity Kalia Sandha to initiate thengapalli or forest patrolling. This is a part of their daily life, where 7-10 women go patrolling the forest every day on a rotational basis. 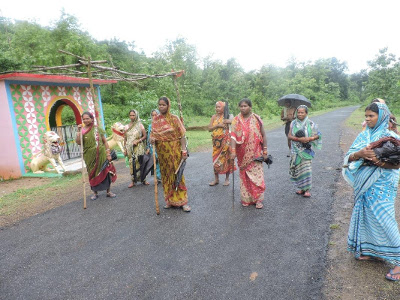 In Odisha, community-initiated forest protection and management initiatives came about in the early 20th century in response to the degradation and continuous dwindling of forest resources. The undivided Sambalpur and Koraput districts pioneered this initiative and set an example for many other areas in Odisha, where it gained momentum mostly in the 80s and 90s and slowly became a mass movement.

According to available data, in the state of Odisha, over 5000 out of 12000 villages within or near a forest (there are approximately 51000 villages in Odisha) are actively protecting and managing state-owned forest land in their vicinity.

Women in these forest-dependent communities are mostly engaged in gathering a wide range of Non-Timber Forest Produce (NTFPs) for both subsistence and income generation through sale. Collection of NTFPs is mostly need-based and there is no restriction on collection by anyone. The NTFPs for household use includes tubers like pichuli, kadaba and tunga along with some leafy vegetables, fruits and berries; for commercial use villagers pick siali (Bauhinia vahili) leaves, sal leaves (Shorea rebusta) and sal seeds from the forest.

During periods of adversity faced by the community due to the depletion of their forest, women took up an active role in the traditional institutional mechanisms, which included establishment of rules on the accessibility and use of NTFPs, formation of forest protection committees, being vigilant and keeping a watch on the forest and punishing offenders for causing harm to the forest.

Gunduribadi has approximately 200 hectares of reserve forest and 30 acres of Gramya Jungle or village forest around it. In the year 2012, the villagers here filed for their Community Forest Resource Rights (CFR) under the Forest Rights Act (FRA), 2006, on the reserve forest and the village forest. But none of them have got Individual Forest Rights (IFR) under the FRA as their claims were rejected for being made on some other Kisaam (category) of the land, instead of the Jungle Kisaam as prescribed under FRA.

From daughter-in-law to custodian of forest

The people of Gunduribadi say that community patrolling of the forest for its protection and conservation dates back to more than 30 years. As Janha Pradhan says, “Matey mo saasu kuhanti, thare ethi marudi padithila… au setey bele se mananku khaibaku milu thaye…tenu semane Forest bala nku luchikari jungle jauthile au sethu kanda sabu aani nija pila chua nku khaibaku dauthile…” (My mother-in-law used to narrate horrifying stories of times where they faced grave shortage of food during the famine and how they sneaked into the forest that was then guarded by the Forest Department to get some tubers and some forest-derived foods to feed their children and others).

Kamala Pradhan, another sentinel says that when she came to this village as a bohu (daughter-in-law), she saw men coming from far off places to the forest in Saata Bhai to cut down the standing trees and young shoots for wood, which led to a huge scarcity of fuel wood and the eventual degradation of their Saata Bhai forest. The men of the village, however, were not able to protect the forest.

Arjuna Pradhan, one of the village elders in his 70s admitted that earlier, the menfolk used to guard the forest but when the outsiders came to their forest for logging, they were let off because of the kindness and affability of the Gunduribadi men!

By the time the men realised their mistake, the damage had been done. This changed the social dynamics and the women stepped up to take charge, thus starting an era of protection and conservation of the forest by women. Women became the sentinels of this little world and this led to a massive change in the region. Cutting and stealing of wood by men from neighbouring villages reduced drastically and slowly stopped.

Eventually, a Forest Protection Committee (FPC) – self-initiated by the community – was formed in the 1990s. The committee consists of 12 members – 8 women and 4 men – who make decisions about the forest management and conservation process.

Usually the women start the patrol early in the morning around 7 am and return by noon. If the community feels the need to patrol at night, then men take the charge to patrol.

In households where women go for patrolling in the morning, the household chores are done by the older women and the girls of the house. Men bring groceries from the local Public Distribution System Centre or the local shop; they bring back dry wood from the forest along with the patrolling women. For vegetables, the women rely on the kitchen gardens that they have in the backyards and they also bring some leafy veggies, tubers and the like from the forest.

On this particular day, ignoring the heavy downpour, holding a stick in one hand, an old crushed bottle of water and some puffed rice for snacks in a bag along with an umbrella on the other, the sentinels start walking into the forest. Along the way, they spot trees bearing ripe jamun (Syzygium cumini) and plants of kadaba, tunga or pichuli (varieties of tubers they consume as food). 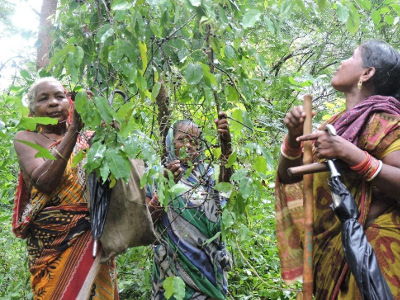 Picture: Women plucking jamun and other berries they found in the forest while patrolling. Credit: Sonali Pattnaik

Munching on the jamun fruits, Sarojini Pradhan comments that the forest has re-grown much better than it used to before the protection started. When asked on how they feel about being in the forest, Basanta Nayak thoughtfully says that the forest is a place where they get to share their thoughts, just as they did in their native place. The chirping of birds, the sound of wind cutting across the canopy, rustling through the leaves, the movement of the animals – all this give them immense pleasure.

Sentinels on the move

After taking a short break, the sentinels resume their walk. The forest becomes more dense, and suddenly one of the women spots a man in the forest slashing the young shoots. Seeing this she alerts the rest of the group who together catch hold of the man and his accomplice. Janha Pradhan walks a few steps ahead and finds an auto loaded with woods and climbers.

Gurei Pradhan, a 38-year old sentinel says, “Jungle hauchi ama pila bhali… nija pila bhali ame taara jatna nauchu …surakhya karuchu… ama pila ku jadi kiye kasta dele ame sahi paribuni sehi bhali..jadi ama jungle ku kiye nasta karile ame taaku chadibuni…” (We think of the forest as our own children, we take care of it, conserve and protect it as our own child. If anyone tries to harm it, then he/she will be punished. We cannot let them go…at any cost).

The women bring the men to the village after seizing the wood and the auto. It turns out that the men belong to a neighbouring village. After tough interrogation and admonition from the women, the offenders ask for forgiveness and swear that they will never ever enter the forest without taking permission from the village FPC. After much discussion, the sentinels let the men walk away with a promise that they will never steal from the forest again. 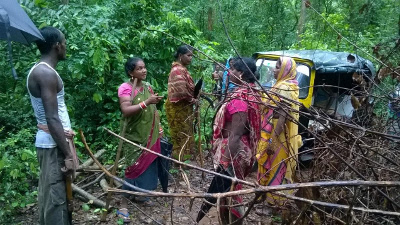 Most importantly, the FRA 2006 has been successful in providing a platform for the village women to voice their opinions and participate in the decision-making process. Following the Gunduribadi example, women of the neighbouring villages like Darpanarayanpur, Sinduria, Kodalapalli and Kendudhipi have also taken up active roles in protecting their forests and simultaneously filed their claims over the community forest that is under their protection.

Sonali Pattnaik is a Bhubaneswar based PhD scholar. She is thankful to Mr. Hemanta Kumar Sahoo, Mr. Subrat Kumar Nayak and Mr. Chitta Ranjan Pani for their support and guidance for this article and to her present organization Vasundhara for giving her the research opportunity for this study.