Manjari Singh reports on the opening of the Lucknow branch of Sheroes Hangout, a café run and managed by acid attack survivors under the guidance of the humanitarian organisation “Stop Acid Attacks”.
16 March 2016 -

“She loves dancing, just play her music and see her foot tapping,” gushes Lakshmi as she puts her one-year-old daughter Pihu to sleep on her lap. It was International Women’s Day and one couldn’t think of a better day for the launch of the Lucknow branch of Sheroes Hangout, a café run by acid attack survivors. 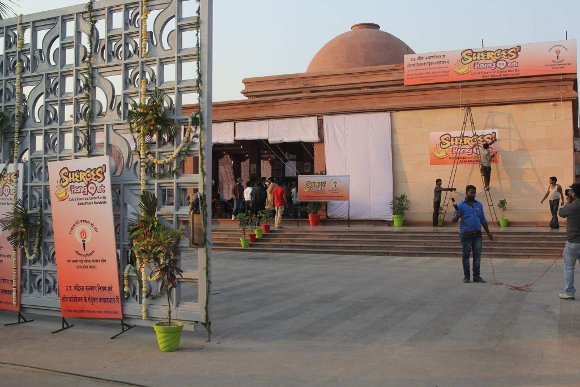 Lakshmi is visibly busy, instructing the staff and interacting with media simultaneously.

“So, what does being a woman mean to you?” asks a journalist. Lakshmi, who was attacked with acid when she was barely 16 by a 32-year-old man whose advances she had rejected, thinks for a while and replies, “It means blessing, I still feel blessed, even after all that happened to me. I didn’t start hating men after I was attacked with acid. I suffered for a very long time but hating men would also mean hating my father and brother, and I wouldn’t have found Alok, if I had turned into a man-hater,” she smiles.

Alok Dikshit is Lakshmi’s partner and founder of Stop Acid Attacks, an organization that helps rehabilitating those attacked with acid. Sheroes Hangout at Agra is a café established in 2015 by this organization run by survivors. “And the biggest blessing is sleeping on my lap,” Lakshmi continues with a smile.

Located in a prime location at Lucknow’s Gomtinagar, Sheroes Hangout is going to be the ‘coolest hangout’ of the city. And why not?  It has everything that is quintessentially required to be one, right from out-door seating to live music and of course, great food.

“Our café in Agra is known as the second Taj Mahal of Agra; whoever visits the Taj Mahal pays a visit to our café as well,” says Lakshmi. The ‘pay as you wish’ concept is also faring well for Agra’s café and will be implemented in Lucknow too.

“Yes, you might want to know why we don’t charge like the way cafes do but then, this is no ordinary café, it’s all about the spirit,” says Lakshmi, adding that the Agra branch is a profit-making venture. “There are some people who eat, enjoy the ambience and pay nothing at all but then there are also people who leave lots of cash and love behind.”

The women running the cafe in Agra didn’t get any professional training and learnt everything through small workshops that the organization conducted from time to time; the staff at the Lucknow café too learnt the same way. “They were quite hesitant at the beginning but then they were immensely appreciated by the visitors and that boosted their confidence,” shares Lakshmi.

The café in Lucknow will primarily be run by four survivors, namely, Farah, Reshma, Rani and Sunita. Most of these women were attacked by their spurned lovers.  Reshma who will be assisting the chefs is a survivor from Kanpur who had been married to a man from Lucknow for 16 long years. The marriage turned sour after Reshma gave birth to her fifth girl child. When her husband learnt that she is pregnant for a sixth time in 2013, he asked her to get a sex determination test done and when she refused, he attacked her private parts with acid. 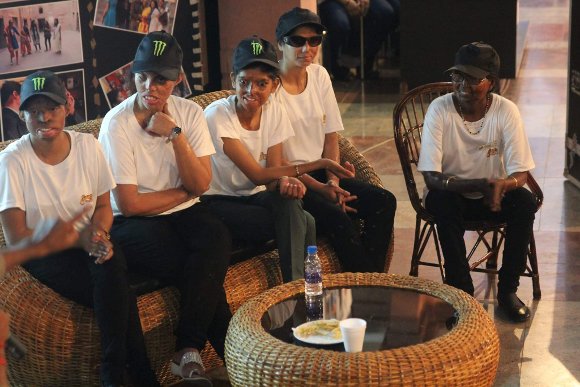 The women running the Sheroes Cafe in Lucknow. Pic: Sheroes

“I was at the initial stage of pregnancy that time, I didn’t get any first aid and my in-laws locked me inside a room,” she says. She was rescued by local NGOs and had surgeries done after she got in touch with Stop Acid Attacks.

“I delivered the child too, and he turned out to be a boy. He lives with my parents and I will bring him here once I am settled here,” says Reshma.

The surgeries, trauma and bitter memories did break Reshma for a while but now life feels like a dream.  “I travel alone and I interact with so many people confidently. I thought my life was over after I was attacked,” she says.

Reshma went to Agra to learn to make Kebab Paratha and Biryani along with other items. “And that was the first time I went to a city other than Kanpur and Lucknow. All thanks to Alok Bhaiya. My legs hurt when I walk but then Alok Bhaiya never lets us get our spirits down,” she says.

That is exactly what Alok Dikshit had in mind when he started Stop Acid Attacks in 2013 – to ensure that the spirits of those who are attacked and survived never fail. “Society shuns those who are scarred with acid, but here we let survivors know that there’s more to life than scars and trauma,’ says Lakshmi.

“Our next café will be in Udaipur, we have already finalized the location and it will be functional by next year,” Dikshit adds. The organization will soon start hunting down the survivors living in Uttar Pradesh who were attacked before the law related to acid attacks was introduced in 2013. This law promises compensation and free treatment by the state government.

“186 women were attacked with acid in 2014 in Uttar Pradesh itself, that’s a huge number,” says Ashish Shukla, co-founder Stop Acid attacks. “We also stage Nukkad Nataks to create awareness amongst people,” he adds.

Shukla admits that the only way such attacks can be curbed is by stopping the sale of acids. He points out that there is a law against every crime, including murder or rape, but then law alone hasn’t been able to stop these criminal acts. And that is why he emphasizes citizen’s participation in ensuring effectiveness of these laws. “Sale of acid is banned by law but shopkeepers still keep it and you never know who is going to be attacked next, so I feel it’s citizens’ responsibility to report sale of acids whenever they spot it,” he says.

The organization also plans to have counseling sessions with the survivors’ families. “When a girl is attacked with acid, the only thing that comes into families’ minds is marriage. We will tell families that there’s more to girls’ lives than getting married; an acid attack is not the end of everything,” he says.

The latest addition to the organization is Rani from Orissa who will be handling the customer care department at the Lucknow outlet. Rani was attacked by a man whose marriage proposals she had turned down five years ago. She was in the ICU for nine months and bedridden for four years. She lost her vision partially due to the attack but her spirits are shining bright today. “I was trained at Agra and I am quite excited about the new chapter of my life,” she chirps.

All the women will be living in a hostel provided by the organisation in association with the state government. “After being dependent all my life, I am excited at the thought of leading an independent life in a new city,” adds Rani.

The guests are pouring in by now; some women are dancing to the music which the live band is playing while some are busy serving food to the guests. Ritu Saini who works at the Agra café has been on her toes since the morning and she is not complaining. “I am happy that my friends will live a dignified life, just like I do,” she says.

Ritu was a Class Twelve student and a state level volleyball player, before she was attacked by her cousin in Rohtak over a property dispute. “I stopped going out, even those numerous surgeries couldn’t get me my old face…but now I know more feel victimized,” she adds.

Time to wrap up for the day as the band plays the last song of the evening, ‘Bol ke lab azaad hai tere.’

Manjari is an independent journalist based out of Lucknow who writes on gender issues.