The Assamese small tea sector has seen impressive growth over a relatively short span of time, thanks to the efforts of growers and support from the Tea Board. All it needs now is state support to take it to the next level, reports Ratna Bharali Talukdar.
27 January 2014 -

Way back in 1996, Karuna Mahanta decided to grow tea in his campus covering a small plot of around two bighas (around 6.5 bighas constitute a hectare), after one of his friends motivated him to start tea cultivation on small holdings for economic benefit. He began with some hesitation and a lot of uncertainty, as no one in his family had any experience in growing tea. The saplings, however, grew healthy; within six months, the first plucking season of green tea-leaves started and Mahanta could pluck 16 kg of tea-leaf in a single day from his small tea garden. No doubt, this initial success largely encouraged him to gradually increase the area under tea plantation.

Since then, almost eighteen years have passed. Mahanta has continuously persisted with his efforts to produce quality tea-leaves in small land-holdings - both by learning more himself, and by educating others to train themselves and take it up. This has enabled him to pluck as much as 800 kg of green tea-leaves a day during peak seasons. The journey has not been a smooth one all the time, but over the years, Mahanta has established himself as one of the successful small tea growers in the state, with 40 bighas of land under tea-cover today, and simultaneously created employment avenues for almost 30 people in his locality.

Mahanta, the general secretary of All Assam Small Tea Growers Association (AASTGA), is just one of over one lakh small tea growers (STGs) in Assam who have found unique employment opportunities through tea production in small holdings and have contributed to over 30 per cent of total tea production of Assam. This, without any concrete government policy to support their efforts. The production of tea in Assam during 2012 was 588 million kg and is expected to be over 600 million kg during 2013. The small tea sector has been growing as the most flourishing plantation industry in Assam over the last three decades, accounting for 14 per cent of India's total annual tea production.

The tea industry in Assam has a long history, with the British establishing the first tea garden in Chabua in Tinsukia district of Upper Assam in 1837. The concept of cultivating tea individually in small holdings is, however, a relatively recent phenomenon. Though a few growers in Upper Assam have traditionally been engaged in cultivating tea in small holdings, it was only during the late seventies and early eighties that a number of youth in the region initiated the process of growing tea in upland abandoned areas. The initial experiment was largely successful and attracted others to enter similar ventures.

Relatively low-capital required for investment, favourable climatic conditions, technical support from cheap and skilled surplus labourers from the big tea gardens in these areas to extend technical support and a locally available market for green tea-leaves turned this new effort of a section of local and enthusiastic youths into a huge success story. This initial success drew hundreds of more young tea growers, particularly from Tinsukia, Dibrugarh, Sivasagar, Golaghat and Jorhat districts of Upper Assam. They were mostly educated and unemployed, eager to grab the opportunities unfolded by this new concept, and tempted by the prospect of carving out their own identities through self-employment in these small tea-gardens.

"These factors contributed to the new approach of growing tea in small holdings. Very soon STGs emerged as a gearing tool for sustained alternative livelihood option, especially as there were least possibilities of crop failure in tea plantations, unlike in other agriculture practices. The uniqueness lies in the factor that, the owner of an STG is also the worker of his own garden. This 'micro' approach has also been proven to be productive in terms of maintenance of quality. No wonder then that STGs instantly took the shape of a green revolution in a state like Assam that has been striving for economic prosperity over the decades," says Mahanta.

Prior to such efforts by local youth, the fruits of tea cultivation in Assam were reaped mostly by the big-tea sector; local people were completely deprived of enjoying the benefits of tea. But with increasing examples of hugely successful tea-growers in small holdings, more and more young cultivators have adopted small tea as a viable alternative livelihood. Referring to a study conducted by the Assam Agriculture University (AAU) in Jorhat nearly two years back, Mahanta points to the the finding that STGs had generated local employment for around 15 lakh youth in Assam.

The Tea Board of India (TBI) defines STGs as those having land upto 10.5 hectare (75 bighas). However, average land holdings of growers engaged in tea plantation in Assam is around 10 bighas and is enough for sustenance of a single family. A section of these youth do have land-holdings below 10 bighas, and earnings from such holdings form partial income of the family.

As STGs grew and spread to various districts, the All Assam Small Tea Growers Association (AASTGA) was formed in 1987 to take up different issues of such growers. The Tea Board, earlier had the provision of supporting STGs by providing a subsidy of Rs.60,000 per bigha of land-holding. However, such provisions failed to address the issues of the growing number of STGs, since only those having permanent land patta were entitled to avail the subsidy. In 2012, the Board decided to issue biometric cards to maintain a database of growers and to fix the price of green tea-leaves. So far over 30,000 growers have been covered under the system, Mahanta adds. 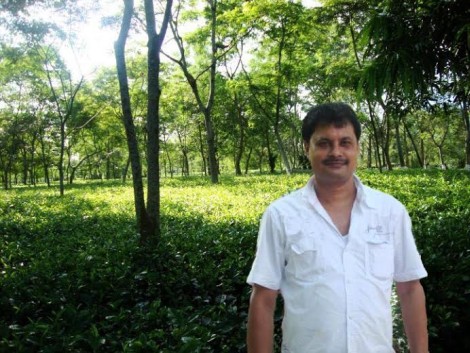 The Tea Board has recently decided to approve setting up of mini and micro factories by the small tea growers within their plantation areas, with an aim to improve plucking standards and retain garden freshness. This is expected to help improve the quality of tea processed from green leaves of small tea gardens, as the time needed for transporting green tea leaves from the gardens to factories will be reduced. It will also help retain the garden freshness of the green leaves.

Usually, while being transported to factories, the green leaves from small tea gardens are subjected to multiple handling but with factories in closer proximity, this will also be reduced.

The Tea Board, which has defined 'micro' as factories having capacity of upto 200 kg and 'mini' as factories having processing capacity of upto 500 kg a day, has also decided to provide 40 per cent subsidy on the cost of plant and machinery to such growers. The small tea growers will have to obtain biometric cards to avail the various benefits offered by the Tea Board.

With Assam having over one lakh small tea growers, the mini and micro factories will open up a huge chain of employment opportunities at the garden level even if only 10 to 20 per cent of small tea growers are able to set up their own factories. Manpower, both trained and otherwise, will be needed to maintain and run the plants and machinery in these factories, to package and supply the made tea, to make and supply finished packaging materials etc.

The possibility of such vast opportunities in the small tea sector enthuses Mahanta. Thus encouraged, he is now planning to diversify his holdings by developing some areas for 'organic' and 'orthodox' tea that have higher value in external markets.

Citing the instance of Kenya, Mahanta says that the number of small tea growers in that country now contribute about 70 per cent of total tea produced. This has been made possible by the huge support from the Kenyan government. A policy push by the Assam Government to supplement the Tea Board initiatives will ensure that the support needed by small local growers are met and boost the sector. That, in turn, could provide a way to replicate the Kenyan success story in the state, he adds.