A dream come true, but can it seed another?

The overwhelming mandate won by the BJP under Narendra Modi has led to continuing upward rally in the markets, but can it also inspire similar cheer in the social space? Shankar Jaganathan remains optimistic.

Let me start with two confessions—I belong to the minority and I am an optimist; A minority that did not vote or root for Narendra Modi despite which I am optimistic now, after the verdict. I can see the Indian stock markets rising, no longer in mere anticipation of a BJP victory, but actually continuing its positive trends post the results. A thumbs up for economic prospects.

However, I wonder how ‘Indian Social Exchanges’ would have fared, if such a barometer did exist to measure the social prospects of Indian society. My instincts say it would be a thumbs down. But why?

Just as the stock markets have reacted not to any specific action but to the expectation of potential action, so too my instincts have been triggered by my apprehensions and not anything concrete. The very reason for which the markets are cheering is the source of my despair. At the base of my apprehension is ideology, economic ideology to be precise.

BJP is seen to have a right wing, pro-market ideology. Being ‘pro-market’ does not mean just pro-business, it also has another dimension. It means a cut in social welfare budgets which in India will dilute an already weak social security net. Spends on public education, public health and relief to the rural unemployed will come under threat, weakening the already fragile social security system. India is home to the largest number of poor people and children suffering from malnutrition. Any cut in budgets and the situation will only worsen.

Another equally pressing concern is on the environmental front. Could our rich environmental wealth be sacrificed for accelerating economic growth?

These concerns arise only out of apprehension, and when the optimist in me dominates, I have to admit they may remain just that. The barometer of Indian social prospects can be revitalised and their prospects kept hale and healthy and at least at par with, if not racing ahead of, the Indian stock markets. For this, just a handful of bold and decisive steps would be adequate.

For me, the top two initiatives would include action in the domains of education and health, both of which are not only non-controversial but also universally accepted focus areas. And what is more, both of them can be acted upon within the next few months. 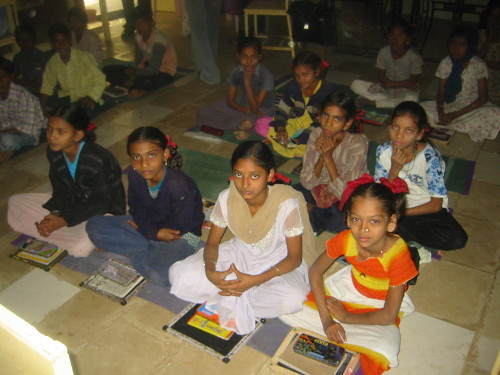 Girls in a primary school in Gujarat. Pic: Yann/Wikimedia

The NDA government can take a leaf out of their earlier stint, when they launched the Sarva Shiksha Abhiyan in 2000-01 to make primary education universal, an initiative which has stood the test of time. I think the time is now right for another such landmark initiative to transform the Right to Education Act from just another piece of legislation into reality. Resources for this initiative can come from a special cess levied on all direct taxes imposed by the central government.

What can make this initiative stand out as a unique and stellar display of political will is ring-fencing of the resource raised for this purpose. This will prevent it from being diverted and used for reducing fiscal deficit, which was what happened with the Primary Education Cess levied by the UPA government. Research on tax evasion shows that compliance with tax laws go up when taxpayers are convinced of its end-use and an assurance that their contributions cannot be diverted.

On the health front, formulating a new national health policy and committing to a time-bound schedule for setting up the National Health Assurance Mission will change the perceptions on the social front significantly. Both these initiatives are identified in the BJP Manifesto 2014 and what is required now is a defined time frame for action and quantifying the investments that will be made.

A welcome step in the manifesto is its emphasis on reducing the out-of-pocket expenses on health care for the common man. This emphasis will carry more weight if it is backed by quantified public investments to realise the vision.

Building a new healthy India comes with the desirable by-product of generating quality employment in rural and semi-urban areas. Even the education initiative can generate large employment opportunities, as the newly mobilised resource can be used for recruiting qualified teachers. Their impact will be most visible in the more backward areas where the need for quality education and qualified teachers is the greatest. New teachers will not only improve the quality of primary education but can also generate significant civic awareness across the country.

Social initiatives, too, need a good measure of performance. Interestingly, the stock market itself can be a measure. Just as good economic policies cause stock prices to rise, announcement of publicly funded social initiatives can also dampen stock prices. Although every fall in stock market is not an indicator of a good social initiative, a slump that is indeed induced by such public-funded initiatives definitely calls for a rerating of social prospects in Indian society. Anyone who wishes well for India cannot discount the need for such a revival today.

Looking ahead at the next five years, therefore, I hope that not only the rises in the stock prices, but also some of its falls, will make us happy. Do you share my optimism?