A familiar battle at Tadadi

Disregard for local sentiment is now the norm in most large projects. At Tadadi, which has faced a long line of threats of displacement, the latest struggle is against a proposed 4000 MW coal-fired plant. With Coastal Zone regulators not very attentive to the violations of law, the villagers can rely only on themselves. Sudhirendar Sharma reports.
19 June 2006 -

It had resisted setting up of a ship-breaking yard in 1987; it had successfully challenged the establishment of Barge Mounted Power Plant in 1996; and it hadn't let a sea port ravage its beauty in the year 2000. But the battles are not over for Tadadi and other fishing communities in the estuarine backwaters on the west coast near Karwar. Their next challenge looms, as the Government of Karnataka forces a 4000 MW coal-fired power plant on their pristine environment and livelihoods. And once again, the 'environment versus development' debate is on familiar turf, pitching ecological diversity and peoples' livelihoods against power generation and employment creation. 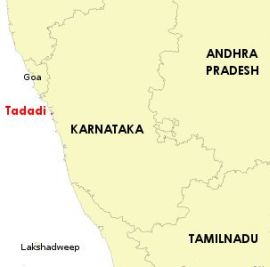 Why should Tadadi be the favoured site for most big projects? Undoubtedly, it holds currency for being in close proximity to the sea, and the consequent ease of shipping in raw materials - the proposed power plant will run on coal that will be shipped from Australia. Coastal sites also make it much easier to dispose off harmful wastes, and while this calculation is often made, it is in gross violation of the Coastal Regulatory Zone (CRZ) provisions. But that is of little consequence in the present scheme of things, the CRZ regulations are rarely observed by large project developers anywhere in the country, let alone in news-remote areas.

Disregard for local sentiment is also an established tradition, by now. In proposing the project the government has undermined the sustained protests against it by fishermen, and has also avoided all ecological rationale. No wonder, then, the entire affected community of over 25,000 people is up in arms against government's decision to uproot them. While the government may seem better prepared to face the opposition this time, it is up against a combined force of religious heads, community leaders and local elected representatives. In a recent meeting with the agitators, the Chief Minister H D Kumaraswamy sought refuge in an empowered committee that will examine the social, ecological and economic concerns of the affected community. However, the leader of the protest movement M R Hegde believes that this is simply a political ploy to delay the decision.

Another familiar and cruel joke: the proposed project seeks to generate employment for the poor by first destroying their existing livelihoods. The growing penchant for achieving economic growth for a few undermines all other considerations. This dangerous trade-off cannot be justified on economic grounds, given how often such projects have failed to deliver promised results.

While the government may seem better prepared to face the opposition this time, it is up against a combined force of religious heads, community leaders and local elected representatives.

Tadadi is an amazing coastal site in Karnataka that overlooks the picturesque Western Ghats. The only free-flowing river of the Western Ghats, Aghanashini, empties itself into the Arabian Sea here, creating an incredible 1800 hectares of estuary in the process. Over 26 mangrove species offer perfect habitat for some 100 species of fish and other aquatic life. Trade in mollusks is reportedly worth Rs.5 crores each year. Salt production is an ancillary economic activity on which 800 families directly depend.

But all this is threatened; as infrastructure investment becomes the guiding mantra for overcoming fiscal deficits, each democratically elected government has systematically pitched people against people in an unending war on nature. Power cuts have been enforced along the cities in the region to justify the project  pitching urban dwellers against the agitating communities.

In many ways, this might turn out to be a decisive battle in the region, better known for the famous Appiko movement of the mid-80s. Though the communities are committed to their struggle, the government seems to be making a last-ditch effort to distance people from their traditional livelihood sources. As people's dependence on primary sources becomes reduced, argues noted environmentalist Pandurang Hegde, it becomes easier for the state to manipulate natural resources to meet its objectives. Of course, the fallout of such organised oppression by the state is exacting a price; recall the first-ever gun shots recently fired by naxals from the forests of Chickmaglur district in the Kudremukh region of the Western Ghats. Tadadi's agitations so far have been largely peaceful, but as the stand-off with the government escalates, that stance looks increasingly fragile.