Infusing sensuality into a Tagore classic

Filmmaker Q's reinterpretation of Rabindranath Tagore's Tasher Desh is a bold experiment, not only in format but also content, as it seeks to layer the classic satire with unprecedented connotations of sexuality and gender issues. Shoma A Chatterji reviews the film.
20 September 2013 -

What does the word 'freedom' mean? Rabindranath Tagore tried to find some answers through his only fantasy-drama Tasher Desh (The Land of Cards). It is perhaps the most evolving among his literary creations, and one he kept working on till 1938, as it slowly became a blend of Pratima Devi's concept, Tagore's 1898 short story Ekti Ashare Golpo (An Absurd Story) and his poem Banijye Boshoti Lakshmi (The Goddess of Wealth Dwells in Business Deals).

Targeted initially at children, Tasher Desh grew into a different, universal and scathing political critique against fascist regimentation of human beings that turns them slowly and surely into mechanical robots, exuding the sense of a futuristic way of life under fascism and dictatorship. Tasher Desh was first staged in Kolkata's Madan Theatre in 1933. The last improvisation by Tagore was dedicated to Netaji Subhash Chandra Bose.

Tagore was inspired by Lewis Carroll's Alice in Wonderland, it is said. Interestingly however, though Tagore's other creations have been picked up by Indian filmmakers of every genre and range from Satyajit Ray to one-time directors, Q - as Kaushik Mukherjee is better known - is the first filmmaker to have chosen Tasher Desh to place on film.

Who is Q? He is the most radical filmmaker in contemporary Indian cinema who breaks every rule in the book of cinema in terms of content, form, images, sound and music and more importantly, distribution and exhibition of his films. "You will all watch my film Gandu on your cell phones in the privacy of your toilet," he says about the film he never bothered to get censored because it had some graphical scenes the censors would have never allowed. Instead, he chose to screen it at international festivals and private screenings at home. His chosen name "Q" itself was his first breaking away from the conventional norm of having a longer name and the rest followed naturally. But Gandu made his name internationally known.

Q's adaptation looks at a prince who, fed up of his life within a palace-prison in spite of the free-flowing wine and women and food, takes the advice of the Oracle, a woman in a flowing red robe, who whispers into his ears the message of freedom. He sets out with his close friend, the merchant's son to explore distant lands. A storm capsizes their boat and they find themselves on a strange land with strange people dressed in uniforms, their identities hidden behind helmets, goggles and faces painted in white and marching rather than walking together with staccato steps. They have symbols of playing cards painted in red on their lips.

The prince and his friend realise that they have landed in the kingdom of cards. The card-humans breathe together in rhythm, sneeze in rhythm and even yawn in rhythm. Laughing and crying are not permitted by their king, so the subjects are surprised when they find the prince and his friend laughing at anything and everything because their lives are strictly regimented by rules and they know no other life but this one.

The prince teaches the female cards to laugh. One of them, the Ace of Hearts (Haratani) presumes to do so, followed by her friends. The entire kingdom then goes beyond the control of the King and his soldiers. The cards indulge in free-flowing sex . homosexual and heterosexual, and enjoy a freedom they never knew about.

From the minute a Bengali child learns to read and write, Tagore is thrust on him like a burden he must carry. Why we should worship Tagore is a question no one cared to explain to me and I wanted to find it out myself, says Q.

"The Land of Cards acts as a metaphor for society, with its priority on control, which in itself is a form of energy that transposes through geometrical progressions. History provides us with enough examples to prove that the overwhelming need for social control consistently subverts all forms of individual liberty. A system is fascistic. Tagore looks at an alternative form of governance. That of the free spirit," said Q in his first draft synopsis of his film.

Q's celluloid interpretation of Tasher Desh has been relocated in the present time and is not a 'period' film. He sticks to the core of Tagore's text but innovates, improvises and restructures it by introducing a third dimension of a storyteller (Joyraj Bhattacharya) who wanders around with a tattered copy of Tagore's text in and around the city of Kolkata trying to persuade someone to present a dramatized version of the play.

In his wanderings, he visits an old mansion in decay where a young widow lives alone and hides herself from him. He finds in her the Ace of Cards (Haratani) from the Land of Cards and begins to read out to her from the Tagore text. When the reading ends, the widow rises in rebellion, and holds out a clenched fist as a symbol of protest. The storyteller's wanderings and his interactions with this young widow form the common ground to reality that bridges the two worlds . the hallucinatory world of the prince and the fantasy, surreal world of the Cards. These segments are shot in Black-and-White and cut into the other narrative segments of the film. 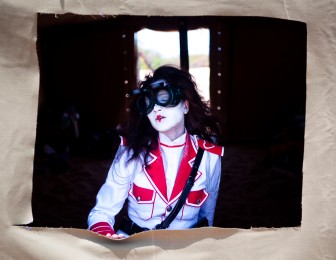 "I wanted to make this film because I have identified with this story from my childhood. When I first saw the play performed on stage, it was very colourful. It was very unlike what you would normally associate with Tagore because Tagore is sombre, soft and emotional at least in the representations of Tagore I have seen. He is almost like a God in Bengal. There is a sense of reverence and almost from the minute a Bengali child learns to read and write, Tagore is thrust on him like a burden he must carry. Why we should worship Tagore is a question no one cared to explain to me and I wanted to find out myself. This was my way of finding out," Q explains.

Q has extended Tagore's brief prologue by stretching it till the interval to explore in great detail what triggered the prince to set himself free from the 'mental prison' he was caged within. His father, the king ,is a womanizer while his mother, the queen, is forever drinking to drown her humiliation. This segment is like a collage of stunning images and metaphors that draw out different aspects of life.

The interiors of the king's palace are in muted colours, cinematographed as if seen through hallucinatory or drugged vision, with slow movements of characters, including beautiful but silent women moving in and out to please the prince and his friend. When the prince arrives in the Land of Cards, the colours and the mood change slowly but surely, to reflect the gradual metamorphosing of the cards from their card identity to a human identity seeking love, passion, sex and freedom.

Q uses Tagore's Tasher Desh with its original text intact, including the songs and their tunes and rhythms, almost with biblical commitment. But the songs are rendered differently, slow and languorous and sensuous to bring out the essence of newly savoured freedom among the female cards. Slowly, the male cards follow suit.

What makes one question his interpretation of freedom is the over-generous use of free sex he fills the second half of the film with. If free sex is the message of freedom, completely distanced from Tagore, then one must note that sex is constrained by the limits of youth. What happens when one grows old and out of sex? As if anticipating this question, Q says, "Tasher Desh has filled me with different sorts of sensibilities. Each time I read it or saw it being staged, it gave me a different reading . at 14, at 18 and today. So, at every point, the text has been able to adapt to my changing sensibilities, which makes it a great universal text."

In order to invest the film with a global identity, Q has drawn his acting cast from across the world and not dubbed their voices so that they speak in an accented Bengali that they have learnt by rote. His use of the uniforms, the white painted face with red lips is ingenious and imaginative because this brings out the message of regimentation and fascism very strongly in contemporary times.

Q has intelligently used an international technical team "because many of them do not have any familiarity with Tagore so they would work without the Tagore baggage and that is precisely what I was looking for." The results are not outstanding but novel, ingenious and innovative. I think it was necessary because I wanted them to enter a space they are not familiar with. Among them are musicians like Asian Dub Foundation, Sam Mills, Susheela Raman, Anusheh, Eric Truffaz. Manu Dacosse is our Belgian DOP. This gave me the objective eye that would be a perfect counterpoint to my subjective one.

Q has drilled in the message that freedom is a concept that exists in the mind; if the mind is not free, as Tagore wrote so many years ago, the whole world is a prison. The prince was a prisoner in his palace, trapped in a life of self-indulgence and plenty. The cards are prisoners of regimentation deprived of emotion, thinking, passion, love and sex. Their king is a prisoner of his own ideas of fascism, not realising that fascism leads to revolt, peaceful or violent.

Even the storyteller finally frees himself of the story he was so passionate about. He casts away his tattered copy of Tasher Desh and walks along the lonely railway tracks of Calcutta with the now liberated, widowed, real-world Haratani beside him. This is the most moving scene in the film. The strains of Tagore's bandh bhenge dao (break away the shores) fill the theatre, bringing to a close Q's great revolution in the world of cinema.

Tasher Desh is more an image film than a message film though very politically, the message comes across. Given its pros and cons, which include Q's passion for a generous display of female skin and graphic sex already established in his earlier works, Tasher Desh is more a memorable audiovisual experience than a film.