Transparency in the SIC, please!

The State Information Commissioners are supposed to uphold the RTI Act in their respective states. But their own appointments are shrouded in secrecy, writes Krishnaraj Rao.
01 September 2010 -

Three RTI Activists - Gopalakrishnan, Siva Elango of Loksatta Party, and Madhav Vishnubhatta of the Association for India's Development - were picked up Chennai Police at about 11.20 this morning in front of the Raj Bhavan and taken to Guindy police station, detained all day, and released in the evening. Their 'crime' - protesting against the non-transparent appointment of the Tamilnadu Chief Information Commissioner.

"They were taken in a white Tata Sumo, and should have been produced before the magistrate at Saidapet Court and remanded by the police under .preventive detention. provisions of CrPC Section 151 and also Criminal Law amendment (CLA) 71A," said their associate Nityanand Jayaram, flustered after a search of about two hours earlier in the day. "However, they are neither at this court, nor at the judges bungalows next to it. The personnel at the Guindy police station also claim to have no knowledge of their whereabouts:.

However, it turned out that the activists had been detained at the nearby Velachery police station. "We were originally to have been produced before the magistrate at Saidapet Court and remanded by the police," said Madhav, a leading campaigner for proper implementation of the RTI Act. "However, after being detained at Guindy and Velachery police stations, we were released in the evening." 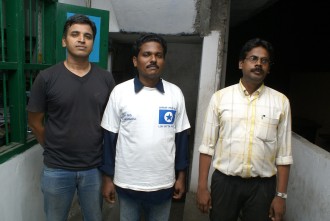 Amazingly, even the invitation for swearing in of the Chief Information Commissioner, which was sent to the press and others, did not mention the name of the person being sworn in. (Above: The three RTI activists detained and released by Chennai Police).

•  Jobs for the boys
•  Righting the RTI
•  Preparing for the future

The three activists were demonstrating against the swearing-in of former Chief Secretary K S Sripathy as Tamilnadu.s Chief Information Commissioner without an open and transparent process. They stood at the entrance to the Raj Bhavan wearing black blindfolds and holding placards that read "Save RTI", "No transparency in Appointments", "Non-transparent appointment to uphold transparency?"

The DMK Government of the state had convened a meeting of the Selection Committee for the appointment for the CIC, as per the provisions of the RTI Act, on 23 August 2010. RTI activists, including Madhav, met opposition leader Jayalalithaa, who is also a part of the three-person selection committee, to highlight the lack of transparency in the selection process. The selection process was not preceded by a call for applications from eligible candidates, and Mr. Sripathy's likely appointment was revealed even before the Committee could meet. Jayalalithaa's request for information regarding the various candidates who were considered was also not honoured.

Activists are unhappy with the choice of Sripathy, who is known to be close to the Chief Minister Karunanidhi. They say his appointment is not only another case of 'jobs for the boys' (senior bureaucrats being appointed to statutory jobs immediately after retirement), but that Sripathy is also particularly unsuited to uphold the RTI. On one occasion during his career in the civil service, he appealed a decision of the Tamilnadu Information Commission directing his office to reveal the names and details of IAS officers who had disclosed their assets and those who had not. Also during his tenure as Chief Vigilance Commissioner, he had facilitated the exemption of the Directorate of Vigilance and anti-Corruption from the purview of the RTI Act.

Amazingly, even the invitation for swearing in of the Chief Information Commissioner, which was sent to the press and others, did not mention the name of the person being sworn in to uphold the RTI Act, which seeks to enforce transparent and accountable governance. Activists believe that this was done to thwart any attempt to bring a stay order against the appointment. See invitation: click here.

"How can there be a non-transparent process to appoint the keeper of the Right to Information Act? This is cronyism at its worst, and spells ill for the RTI Act's implementation in Tamilnadu," says Madhav.

Krishnaraj Rao is an RTI activist, and a member of the group that filed a PIL before Delhi High Court for transparent appointment of CICs.