Not least among the problems in the national capital is the lack of road safety for pedestrians and those using non-motorised transport. Shambhu Ghatak presents data exposing the stark reality of commute in Delhi and outlines recommendations made to improve the situation.
30 December 2013 -

Thanks to the many ills plaguing it, Delhi has come to earn its share of epithets. So, while on the one hand, it is often referred to as the 'rape capital' of India, it has also earned notoriety for having extremely unsafe roads for pedestrians. The national capital is one of the key destinations for internal migrants from Uttar Pradesh, Bihar, Haryana, Rajasthan, and Madhya Pradesh, who come here in search of livelihoods. For poor migrants, either a walk or a cycle ride is the cheapest mode of transport between their residences and workplaces. Unfortunately, these commuters, like other poor residents of the city, enjoy little safety or conducive transport infrastructure.

Non-motorised transport (NMT) in Delhi is significant, mentions Prof. Geetam Tiwari (2013) of IIT Delhi. In Delhi, the modal share of pedestrians is 33 per cent. Despite this, the Delhi Economic Survey 2012-13 states that on main arterial roads, there are very few pedestrian crossings and few foot over-bridges or subways. This has put the safety and concerns of pedestrians at risk.

The Delhi Human Development Report 2013 acknowledges that giving excessive attention to speed and efficiency has actually undermined the interests of pedestrians, making road usage lopsided in favour of the richer sections of society, which own and drive motorised vehicles on the increasingly crowded streets. The 12th Five Year Plan notes that urban planning in many cities has not made any provision for dedicated tracks for NMT such as bicycles, pedal rickshaws and pedestrianism.

Although the National Urban Transport Policy (NUTP) of 2006 admitted that explosive growth in the number of motor vehicles has hampered free movement in the limited road space, it emphasized the role of private investment in transport infrastructure that excludes the majority who use public transport, points Dunu Roy (2013) of Hazards Centre.

Accidents, deaths and modes of transport

The National Crime Records Bureau's report entitled Accidental Deaths and Suicides in India 2012 (ADSI 2012) informs that Delhi reported the highest number of road accidents (6,937) among the Union Territories (UTs), which is 1.6 per cent of the national total (4,40,042). A grim fact is that 501 persons who died in these road accidents during 2012 were pedestrians, which is almost 26.8 per cent of the total number of road accident related fatalities in the city (1866). Compared to this, at the country level, the percentage of pedestrian deaths was 8.3 per cent (11,571) out of the total 1,39,091 road accident related deaths.

The government has invested hugely in improving the infrastructure for motorized vehicles alone. Consequently, safety concerns have prevented many citizens from switching over to NMT, which are affordable, environment friendly and promote healthy living.

•  Building the Transit Metropolis
•  Walk on the road, legally

It is not surprising, therefore, that Delhi is viewed as an extremely unsafe place for innocent pedestrians and cyclists. After being hit by a speeding car on 20 October 2013 while pedaling, environmentalist and Director of the Centre for Science and Environment, Sunita Narain wrote: "There are no dedicated lanes for cycles; there are no sidewalks. The little stretches that do exist are either dirty or taken over by parked cars. Roads are for cars. The rest don't matter" (Business Standard, 10 November, 2013).

There are two main sources of data on road accidents in India - the Ministry of Road Transport and Highways (MoRTH) and the NCRB. The data released by MoRTH's report entitled Road Accidents in India 2012 shows that the number of pedestrians and cycle riders killed in road accidents during 2012 are 830 and 114, respectively. But these numbers are at variance with the corresponding figures provided by NCRB, as can be seen from Table 1.

Table 1 : Number and share of road accidental deaths by
various modes of transport, 2012 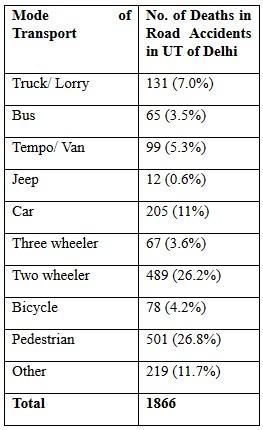 In their report published in the Economic and Political Weekly, S Sundar and Akshima Ghate argue that reliable data is unavailable on the categories of victims because of the way data is collected and recorded by the police. The authors draw our attention to the inconsistency between the number of accidents and persons injured in the NCRB and MoRTH data. The data on number of deaths also does not match exactly, but is closer. There is also significant disparity between data reported by hospitals and police stations, and this leads to divergence between the data maintained by the MoRTH and the NCRB.

Why is there a preference for motorised transport?

The government has invested hugely in improving the infrastructure for motorized vehicles alone. Consequently, safety concerns have prevented many citizens from switching over to NMT, which are affordable, environment friendly and promote healthy living, mentions the 12th Five Year Plan.

As opposed to what promoters of Metro systems believe, evidence shows that available space on the road (created by reduced congestion after the inception of Metro services) gets quickly filled up with motorised vehicles due to induced demand. The Metro system too, therefore, does not result in overall reduced congestion or air pollution, as pointed out in a study by Tiwari.

Due to faulty transport policy and urban planning in the National Capital Territory (NCT) of Delhi, one finds that the percentage of households having scooter, motor cycle and moped has increased from 28.0 per cent in 2001 to 38.9 per cent in 2011. However, the percentage of households owning a bicycle has declined from 37.6 per cent in 2001 to 30.6 per cent in 2011. The NCRB reports that the number of persons who died in Delhi while riding motorized two wheelers (489) was significantly higher compared to those who succumbed while wheeling bicycles (78) during 2012.

As a result of crowding out of bicycles by two wheeler and cars, one discovers that the share of two wheelers (62.4 per cent) and cars (31.5 per cent) presently stands at nearly 94 per cent of the vehicular population in Delhi, almost all of which are personalised vehicles. The per thousand population of vehicles has shot up by 70 per cent from 256 in 2001-02 to 436 in 2011-12 [Delhi Human Development Report, 2013].

The average number of daily passengers in the Delhi Metro has reportedly increased from 45,000 in 2003 to 20 lakh in 2013 but it is mostly used by economically well-off persons [Delhi Human Development Report, 2013]. A study entitled 'Livelihoods of the Poor and Vulnerable in NCR' conducted by the Institute for Human Development in 2011 at the behest of Sir Dorabji Tata Trust (SDTT), Mumbai finds that Metro is a rare mode of conveyance for poor workers. Shortage of feeder buses for last mile connectivity is the biggest obstacle experienced by Metro commuters.

A PhD thesis by Mukti Advani of IIT Delhi in 2010 finds that nearly 27 per cent of metro trips are dependent on rickshaws. Metro systems are favourable in terms of saving time only if trips are of 10 km or longer, writes Tiwari. Persons living along the metro line within walking distance of a station have the highest accessibility to it. The utility of a metro trip therefore falls too, if pedestrian infrastructure is inconvenient or absent.

Apathy towards pedestrians and cyclists has put their lives at the mercy of speeding cars and SUVs in most metropolitan cities in the country. Although India's share in the number of vehicles in the world is just 1 per cent, its share in total number of road accident-related deaths globally is 10 per cent. The World Health Organisation has forecast road traffic injuries to rise and become the fifth leading cause of death by 2030. The 12th Five Year Plan has made some serious observations and recommendations pertaining to urban transport, some of which are as follows:

Among many other things, the Delhi Human Development Report 2013 has also made the following policy suggestions for improving urban transport and pedestrian safety in the city:

Delhi's new government that has many promises to keep, it will be interesting to note how it prioritises safer roads for pedestrians and cyclists in relation to various competing demands and civic issues. In Gandhi's own country, where padyatras once held a special place, urban planning ought to find a way to focus anew on safety of walkers and NMTs.