In India, we have known the magic of turmeric all along. An Indian kitchen without a can of turmeric is rare. The world today is discovering this member of the ginger family. Scientists worldwide as well as in India are validating the medicinal properties of the root, reports Ramesh Menon.
21 March 2006 -

If your grandma put a pinch of turmeric powder into her cooking everyday, it was with good reason. It was not just to give a bright yellow glow to food. It was her best antidote for you. You will rarely see an Indian kitchen without a can of turmeric powder on the shelves. Curcumin is the active ingredient in turmeric. It is the bright yellow pigment in the root that gives colour to the food.

Science is catching up

Very recently, scientific investigations at home and abroad are now confirming that turmeric can cure a host of diseases. Many of them are specifically studying how turmeric can inhibit the growth of various types of cancer. 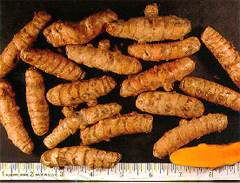 Scientists at the Institute of Cytology and Preventive Oncology (ICPO) based in Noida, Uttar Pradesh, have recently found that curcumin protects the body from the deadly Human Papilloma Virus (HPV) that is the main cause for cervical cancer. Certain HPV viruses need viral oncogine protein from cells in the body to express themselves rapidly. Curcumin actually stops the protein from epithelial cells to bind with the virus. Clinical trials of the compound have already started in the All India Institute of Medical Sciences, Chittaranjan National Cancer Institute, Tata Memorial Hospital and ICPO. The trials will cost over a crore rupees and will be financed by the department of biotechnology and the Indian Council of Medical Research. Results are expected to take over three years. (1 crore = 10 million)

Says Dr Mangla Rai, Director General, Indian Council of Agricultural Research: "A lot of research on turmeric has been done and documented. Turmeric has got so many medicinal properties and will be a very paying proposition in the years to come. Naturally there will be an international interest."

The versatility of turmeric in combating a number of complex diseases like cancer and multiple sclerosis is amazing scientists abroad.

A study by The American Association for Cancer Research in San Francisco, California, shows that turmeric could help lower the risk of cancer. Researchers found in laboratory tests that curcumin can enhance the cancer fighting power in treatment if combined with TRAIL, a naturally occurring molecule that helps kill cancer cells. TRAIL is "Tumour necrosis factor related apoptosis inducing ligand". A preliminary study at the Vanderbilt University in Nashville, Tennessee has shown that turmeric may arrest the progression of multiple sclerosis that is an incurable disease affecting the brain.

Japanese researchers at the Hamamatsu University School of Medicine say that turmeric may help cure colitis, an ailment that leads to inflammation of the intestines.

India produces nearly the whole world's crop of turmeric and uses 80 per cent of the produce.

Medical research has recently shown that turmeric could halt the spread of breast cancer to the lungs apart from improving the effectiveness of ongoing medication. Curcumin is an antidote to breast cancer. Preliminary tests on mice have already been carried out in England.

How does curcumin do this? Curcumin works by shutting down a protein active in the spread of breast cancer. More interestingly, it is also now believed to even reverse a side effect of commonly prescribed chemotherapy whose prolonged use may actually help to spread the disease. Curcumin breaks down the dose, making the therapy less toxic.

International interest in the neuroprotective potential of turmeric has risen after seeing its efficacy in traditional treatment in India. An Internet search on Google showed over 90 scientific institutions in the United States studying the magical medical properties of the ancient Indian herb.

But some worry at the peaking interest in the scientific community. Celebrated activist, Dr Vandana Shiva, Director of the New Delhi based Research Foundation for Science and Technology and Ecology, says that the research on turmeric that is being done by various American universities financed by private money will be patented by a "cowboy" company. An ordinary housewife in India who knew the benefits of turmeric will then be denied benefit of the knowledge that the American research has produced, she feels. "Since the basis of knowledge of turmeric has come from India, it must be shared, as it is not an original invention. Society has disseminated traditional knowledge without making millions. Let the west learn from that and do that too, " says the activist.

The worry is well-placed. In the late nineties, the United States Patent and Trademark Office granted the turmeric patent to the University of Mississippi, shocking the Indian Council of Scientific and Industrial Research. The Government of India appealed for a re-examination of the patent. The patent was rejected, since Indians knew of the use of turmeric for wound healing properties.

Other observers have a more benign outlook. Dr A K Sen, a senior scientist formerly at the National Institute of Science Communication says that scientists in the United States are today proving in labs what Indian traditional knowledge knew for ages. He feels that such experiments validate doubts that arise in the intellect about traditional medicine. "We are grateful to them for proving what we knew for centuries. Potent molecules derived from nature and medicinal plants that were traditionally used will show wonders in newer and newer diseases in the future," predicts Sen.

India and turmeric - a long affair

India produces nearly the whole world's crop of turmeric. It uses 80 per cent of the produce, as it is an important ingredient in Indian cooking occupying a pride of place on every kitchen shelf.

As noted at the beginning of this article, turmeric in India was always considered a magical herb. Indian folklore always had it that turmeric helped reduce inflammation. Ayurveda used it for the treatment of many inflammatory conditions and diseases like arthritic and muscular disorders. Early Sanskrit works mentioned Turmeric. Both Ayurvedic and Unani practitioners were familiar with its medicinal properties. It was administered to strengthen the working of the stomach. It was mixed with honey to treat anemia.

For measles, dry turmeric roots were powdered and mixed with a few drops of honey along with the juice of few bitter gourd leaves. It was also an effective remedy for chronic cough and throat irritations. Half a teaspoon of fresh turmeric powder mixed in warm milk worked wonders for bronchial asthma. Turmeric with caraway seeds or ajwain helped tackle stubborn colds. It's paste mixed with lime and salt was used to treat sprains. Your grandmother knew all this, before science laboratories in India and the West discovered it.

Turmeric is also useful in curing periodic attacks of hysteria and convulsions. Its juice or dry powder, mixed in buttermilk or plain water, is highly beneficial in intestinal problems, especially chronic diarrhoea. About 20 drops of juice of raw turmeric, mixed with a pinch of salt, taken first thing in the morning is considered an effective remedy for expelling worms. The list goes on and on.

With new western research showing what the yellow magical powder can do for health, turmeric is soon destined to add colour to western cuisine.