The women left behind

Across rural India, the phenomenon of migration creates an entire class of women left behind to fend for themselves in the face of increased vulnerability to neglect, discrimination and psychological as well as physical abuse. Puja Awasthi highlights their plight.
18 February 2014 -

Sunaina Vishwakarma, 29, oscillated between bright hope and dark despair in the 11 years of her married life, depending on the promises that her husband Ashish, who worked in Mumbai, was making or breaking. The last bits of hope, however, crumbled one night when her brother-in-law attempted to break down the door to her room. The next morning she ran away from her in-laws’ home in the village of Meghpur (in the district of Azamgarh), with her two children. The absent husband, who she believes had consented to the myriad forms of violence she had been subjected to, did not ask her to return.

According to The India Human Development Survey of 2005, among ever-married women between the ages of 15–49, about 4.5 percent of the rural women and about 1.5 percent of the urban women had husbands who lived elsewhere. The phenomenon is highly geographically clustered, with the highest numbers being reported from Uttarakhand (9 percent), Bihar (11 percent), and rural women in Uttar Pradesh (8 percent).

Driven by a lack of employment opportunities, low agricultural productivity, deeply entrenched feudalism, negative industrial growth and the like, men leave home, most commonly for Delhi, Surat and Mumbai. The women they leave behind suffer a greater than usual vulnerability to violence both within and outside their homes.

Ram Kumar, the DIG of Azamgarh, attempts to draw the cause-and-effect relationship between migration and violence. “Migration has made family structures fluid and loose-knit. There are many tensions in the upkeep of the traditional structure of family, and in the absence of fathers, enforcing discipline becomes difficult.”

“There is a paradoxical fallout for women—for instance while they enjoy greater freedom in matters such as the choosing of a life partner they also receive far lesser support when married relations fall apart due to violence. There is a marked sense of insecurity,” he says.

Distance does not make the heart grow fonder

Badri Narayan Tiwari, social scientist affiliated with the GB Pant Social Science Institute in Allahabad, says, “Migration of men makes women soft targets in a society burdened by the many male-perpetuated myths - such as the one which says that women who are without their husbands have physical needs and are hence open to sexual relations. Returning husbands develop a mental distance from their wives. There is a dislocation of desire”.

In Sunaina's case this was compounded by constant complaints against her. “My in-laws started by berating me for not getting enough dowry. My sister-in-law said my morals were loose. They turned my husband against me. He told me that I was not good looking and that I had fallen from his eyes. How could I have made him think otherwise from such a distance?” she shrugs.

Ashish’s migrant status also made legal redress impossible. When Sunaina turned to an NGO to seek help under the Protection of Women from Domestic Violence Act, 2005, she found herself against a wall, for she did not have an address to which summons could be served on Ashish. The in-laws who had denied her food on some days, kept her locked on others, and often prevented her from using the bathroom refused to help till the police intervened.

When he finally appeared for mediation, Ashish reasoned that since he made too little money, it was best that the couple divorce. Since Sunaina was unwilling to do that, a written agreement between the two was reached under which he promised to send Rs.1200 as monthly maintenance while Sunaina stayed at her mother’s home with the children.

Upon his return to Mumbai, however, he refused to send any money, citing erratic earnings. For an unlettered Sunaina, having to raise the two children, it appeared that the violence had taken a more sinister form.

Hina Desai, the director of the Sri Ramanand Saraswati Pustakalaya (SRSP), Jokehara (a village in Azamgarh) - a library founded in 1993, which has since grown into an organisation working on some of the most pressing ills of the region - has been grappling with the issue of violence against women for the last five years. She despairs that migration eats into the best of efforts.

“Suppose we counsel a couple and they reach an agreement, how are we to ensure that it will be followed, since the man will be away and the woman will continue to live with her in-laws? The will of the woman is automatically negated,” she points out.

A continuation of the argument would indicate that while on the one hand, women are denied the autonomy that should be rightfully theirs in matters of household decision making because of migrant partners, on the other, they are expected to shoulder more than their share of responsibilities.

It was this paradox that created havoc in the life of Jonna Patel, 35 who lives in the village of Pandeypur, also in Azamgarh. Fed up of being discriminated against by her mother-in-law, who had would not give her a fair share in the produce from the farmland, she prevailed upon her husband Birwa, who worked in Mumbai as a labourer, to ask for a division in the land and the house. 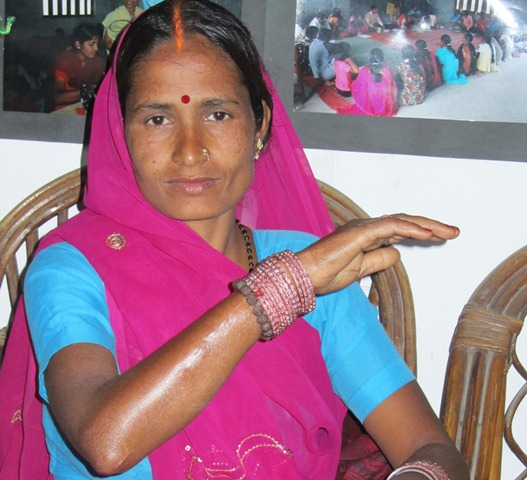 Jonna narrates how her brother-in-law had broken her arm with an axe.

The discussions degenerated into a physical fight and Birwa’s brother attacked Jonna with an axe, breaking her arm in two places. Birwa responded by beating his mother. Villagers, well wishers and social workers who had been mediating between the parties backed off. Birwa escaped to Mumbai and Jonna left her married home.

Desai also emphasises that very often migration is not driven by the pull of better wages but is an escape from the false pretences of a deeply entrenched caste order. She explains with an example. “We once offered a man a loan for a rickshaw so that he could stay in the village and rebuild his family life. He refused. Working as a wage labourer in a place where no one knew his caste, or held him to its obligations was preferable”.

A survey carried out by SRSP among 92 households of 64 castes around Jokehara revealed that every second household had two migrants. OBC and SC households reported more migrants than the traditional upper castes, indicating a deeper need to escape conventional caste-linked pressures, in addition to the need for better employment opportunities.

Although migration has a multi-layered impact on the well being of women, with potentially long term repercussions, the connection between migration and violence has not received much academic attention. Indrani Mazumdar, senior fellow at the Centre for Women’s Development Studies says, “The work on women left behind by migrating husbands is completely inadequate to the scale of the phenomenon, although some writings on the subject do exist - especially for Kerala, Bihar and Uttarakhand. In general, research on women in rural India has mostly followed funder and government driven 'empowerment' and 'development' - frameworks that don't necessarily tell us much about social processes.”

Clearly, the stories of many more Sunainas and Jonnas need to be heard and understood.