WOMEN / AT HOME, AT WORK

What is a homemaker worth?

The assumption that the workplace and the home are always mutually exclusive spheres distorts our understanding of women's economic roles, writes Shoma Chatterji.
15 August 2010 -

The Supreme Court has recently objected to the census listing homemakers as 'non-workers' on par with beggars, prostitutes and prisoners, and called for laws to quantify their contribution to the economy. "This approach betrays a totally insensitive and callous attitude towards the dignity of labour and also strongly suggests a gender bias against women," said a two-judge bench on July 22. The judges added as a suggestive that this be corrected in the ongoing census.

In its discussion of "Economic Activity", the 2001 Census states that "an adult woman engaged in household duties but not doing any productive work to augment the family resources was considered a non-worker. Persons like beggars, pensioners, etc., who received income without doing any work were regarded as non-workers." However, it goes on to say, "A public or social service worker who was actively engaged in public service activity or a political worker who was actively engaged in furthering the political activity of his part was regarded as a 'worker'!" (Exclamation added).

The Supreme Court awakened to the bizarre definitions of the Census while hearing a case pertaining to the amount of compensation to be paid by an insurance company to the family of a housewife killed in a road accident. The Motor Accident Claims Tribunal of Uttar Pradesh, and the Allahabad High Court had earlier quantified her contribution to the family at Rs.1250 a month as a 'non-earning' member of the family under the Motor Vehicles Act. On this basis, they had fixed the total amount of compensation to be paid to the husband as Rs.2.5 lakhs. The Supreme Court, in its ruling, enhanced the compensation to Rs.6 lakhs, and also directed the insurance company to pay 6 per cent interest on the amount owed. The husband will get another Rs.50,000 as legal costs.

By tradition and by law, the housewife - or, in its new nomenclature, the 'homemaker' - is not taken to be an economically productive person. The reward that she - and it is almost always a she - gets for the real and concrete services she renders is solely in emotional terms, including the satisfaction her services bring to the other members of the family. In other words, though her services are direct, the rewards are vicarious. Lenin defined housework as, "The most unproductive, the most barbarous and the most arduous work a woman can do. It is exceptionally petty and does not include anything that would in any way promote the development of the woman.. 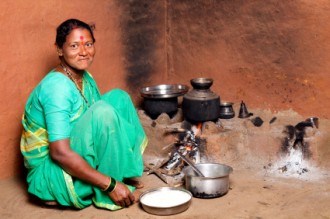 The Workforce Participation Rate, defined as the percentage of total workers to the total population, is 39.3 per cent. While the WPR for males is 51.9 per cent for females it is 25.7 per cent. The gap is almost entirely the result of women's work within homes being classified as 'non-work'.

This ideology sustains today, as the census indicators have proved. Margery Spring Rice, a researcher who conducted a study of British housewives during the Great Depression wrote, "In the large majority of homes, the woman is the slave without whose labour the whole structure of the family tends to collapse."

The irony of the homemaker's job being labeled a 'non-working' one is that the market economy has an analogy for every item of housework that falls in the usual course of a homemaker's everyday chores. Meals at a restaurant or street corner dhaba offer an analogy for good preparation, cooking and serving of meals. Dryers and cleaners provide the analogy for washing and laundering services. Housecleaning can be done by professional housekeepers while taking care of small children, the sick and the ageing, is done by ayahs and nurses. Indeed, there are well-off families that hire such professions - albeit of various skills - to perform these tasks within their home itself!

If these professional service-providers are included in the computation of the Gross National Product, why not homemakers engaged in these same tasks? The answer is simple - because they are not paid for their work! By a self-perpetuating and false logic, the homemaker's 'free' services are not computed in the country's GNP, whereupon it is decided that housework is uneconomic and unproductive! Whereas an International Labour Organisation source (Recomendation 123: Concerning the Employment of Women with Family Responsibilities, 49th Session, June, 1965) reported that if the value of housework is calculated as equivalent to paid services performed by cooks, cleaners, housekeepers and nurses, it would contribute to half the GNP in many countries.

There is little doubt that a homemaker creates evident surplus value through her labour. True, she is not paid for her services. But her total consumption of goods and services she has helped create by her labour is less than the total amount of goods and services she has produced. Instead of the fruits of her labour being exclusively available to her, they are shared among the members of her family, and in many cases in patriarchal societies the benefits are disproportionately appropriated by male heads. Even in desperately poor families, homemakers go hungry at least once a day, and the surplus value they create is consumed by the rest of the family.

Housework has no fixed hours, no holiday and no pay. It is done almost exclusively by the homemaker with some professional help for those households which can afford it. According to environmentalist Rashmi Mayur, "The kitchen environment is the most crucial in victimizing women ... almost all women in India spend a considerable amount of their life in the kitchen. On an average, a woman spends 73,000 hours in the kitchen. "

The average Indian woman spends about 3401 days of her life, or 8.33 years in the kitchen. Assuming that the average life-span of an Indian woman is 50 years, this means that she spends 16.66 per cent of her entire life and four hours per day in the kitchen. These, however, are not accurate figures because they are based on the actual work of cooking. These do not include other processes involved such as chopping vegetables, grinding the spices, kneading the flour, cleaning the rice and pulses etc. Add to this the out-of-kitchen activities like marketing, serving food, setting and cleaning the table or eating space, budgeting, etc.

Even a mechanistic and quantitative analysis does not indicate, much less measure the real cost of the homemaker's labour on her physical well-being, in the form of nutrition during working age or the loss of strength in old age.

Homemakers' work is interpreted and calculated as 'non-work' based on the assumption that "household" and "workplace" are mutually exclusive spheres. This distorts our perception of women's economic roles. In the real world, the division between these two is neither rigid nor real. Many women who fill up forms describing themselves as "full-time housewife" are engaged in various income-generating activities to support the family. There are many home-based activities which do not fall strictly within the periphery of private service for the family members. But as these are either ignored completely or considered 'marginal' in a market economy, they do not produce surplus value and are therefore not considered 'public' production.

The work-home dichotomy also implies that there is an essential contradiction between women's private roles as household managers and child-rearers, and their public roles as wage-earners. The evidence that women can balance these two roles very successfully has not yet led to the overthrow of this myth.