Time to reflect and celebrate

March 8 is International Women's Day. Yet again we will go through the tokenism of remembering that one half of our population  a declining half  consists of women. So is this half of the population better off? Are women in India feeling more "empowered" today, in an India that some claim is "shining", than they did two decades back? Can Indian women dream of a day when they will be treated with the same respect and rights as men, in fact as all human beings, men and women, should?

International Women's Day  and the very fact that there has to be such a day  is an occasion to celebrate and reflect. We can celebrate the fact that some things have changed because of the relentless campaigning and struggles by women's groups in India and worldwide. And we can sit back and reflect on the long and rocky road that still lies ahead for the majority of women before they can be confident, secure and safe.

But first let us look at the "celebrate" part. What can we celebrate? (Given below is a rough and ready list. I am sure readers will have many more suggestions that they can send to me.)

•  That despite efforts to kill them off before they are born, and after they are born, girls in India are surviving and growing up into confident young women.

•  That more girls are now going to school than in 1984 with many of them topping board examinations. 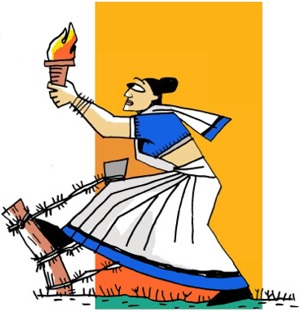 •  That the women's hockey team won the Asia Cup despite no support, no sponsorship and pathetic living conditions compared to their male counterparts.

•  That the women's cricket team now has a sponsor  even it if is a stereotypical women's product, jewellery, small change compared to the level of support for the men's team.

•  That women entrepreneurs and managers are making their mark in a world of men, even if recognition comes by way of separate women's awards.

•  That despite the obduracy of male politicians with regard to the Women's Bill in Parliament, more women are visible in the political spectrum and in the run up to the forthcoming general elections.

But even as we celebrate all this, we must pause, reflect and ask.

•  Why the numbers of women as compared to men continue to decline in India?

•  Why despite changes in the rape laws, the convictions for rape are few and far in between while the incidence of violent crimes continues to grow?

•  Why despite the Supreme Court ruling in the Vishakha case on sexual harassment there is little change in the reality on the ground with a majority of women being unaware of their rights and the majority of men blithely confident that they can get away with it?

•  Why despite the fact that India has the largest number of professionally qualified women in the world do parents continue to sell their daughters into marriage, often miserably unhappy ones, by paying unaffordable amounts as dowry?

•  Why despite progress in science and medicine, millions of Indian women die each year giving birth?

•  Why despite mountains of words about women's right to participate as equals in politics, the Bill to reserve one-third of the seats in Parliament for women dies an unnatural death in successive Lok Sabhas, unable to be introduced, leave alone discussed or passed?

Fortunately, despite the depressing answers to these questions, there is a glimmer of hope. One sees it when you listen to the views of girls like the daughter of a taxi driver in Mumbai who lives in one of the typical "chawls" (one-room tenements) that dot the city. She spoke in English to a television channel recently and confidently stated her desire to join the media when she finished her studies. Why, she was asked. "Because it will give me a chance to meet so many different types of people," she said.

We can celebrate the fact that some things have changed because of the relentless campaigning and struggles by women's groups. And we can sit back and reflect on the long and rocky road that still lies ahead.

If girls like this daughter of a Mumbai taxi driver can dream, and have the confidence to share their dreams before a television camera, then there is reason to have at least half a celebration. For it suggests that even as things get worse for many women in the country  as the gap between the rich and the poor grows, as levels of poverty stay static or increase, as water and fuel become scarce, as survival continues to mean the ability to find enough for one square meal a day, as they continue to be victims of violence of the feuds perpetuated by their men  they have improved for some others.

Yet, the glow from these stories of success, of girls and women who have overcome obstacles to achieve something, should not hide the continuing areas of darkness. The "feel good" motto of the ruling coalition has rubbed off on the media. There is a lot of writing about the achievements of individuals, including women, and institutions. Yet, you hear little about the women away from the media glare, for whom things are not going so well. As a result, it is easy to build an illusionary world, one that highlights the successes without balancing them with failures.

On March 8, we have to look at both. It is only if we have a real sense of what is happening with women, all women, rich and poor, young and old, can we hope to arrive at strategies and solutions that can make a difference and go beyond rhetoric and tokenism. "Real women" have no problem dealing with both  the celebration and the reflection.