Arifa shows how business is done

In conflict-stricken region of Kashmir where women are sheltered and house-bound, it's next to impossible for a woman to be an entrepreneur. Making it possible are women like Arifa, who overcame various challenges to start her own crafts store in Srinagar. Renu Agal meets Arifa to write her inspiring story.

Surrounded by rugs embroidered with green paisleys, autumnal maple leaves and cherry blossoms Arifa is a picture of a poise and confidence that belies her young age. After all, for a woman in her late twenties running a business in the busy streets of Lalbazar in Srinagar, Kashmir, is indeed a rare sight. 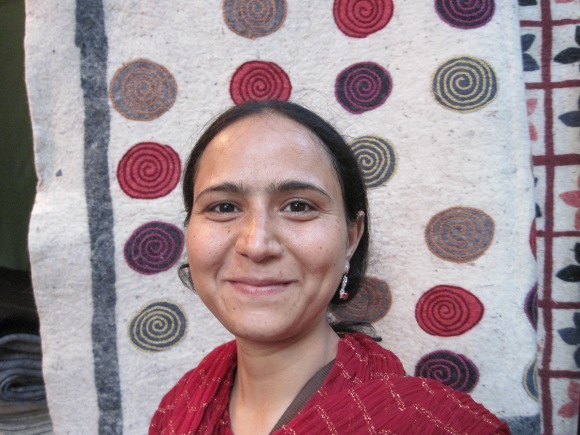 In Kashmir, where shutdowns and strikes are common and violence is a part of daily life, women are forced to lead sheltered lives. Their struggle is to keep themselves and their families out of harm’s way. Arifa's lower middle-class family is no exception. Her father is a state government employee while her mother manages the home. Her elder brother repairs mobile phones and her younger sister is studying.

Like other girls her age, Arifa would have finished her studies and her parents would have started looking for a groom for her. But she had other ideas. Arifa says she had made up her mind to start a business, "I always wanted to be an entrepreneur. When I was in high school I had made up my mind and so I graduated in commerce.”

Learning and starting out on her own

Her unconventional career happened entirely by chance. Trying to find work for one of her relative's widowed wife, she discovered the Srinagar-based Craft Development Institute (CDI). At CDI, which provides education to young people and creates new avenues for innovation and entrepreneurship in handicrafts, Arifa figured out that she could get training in business administration and start her own enterprise. All she needed was the money to pay the fee and a nod from her parents.

At Rs 95,000, the course fee was indeed a princely sum for her, but the tougher battle was to convince her parents. Her father, an illiterate man, feared the reaction of his relatives and friends and generally of the conservative society they lived in. His only advice to his young daughter was "kuch bhi karna, par ghar ki izzat bani rahey (Do what you want, but make sure the family's honour remains untouched)”.

Of course, neither has Arifa disappointed her parents nor has she looked back ever since. Convinced of her talent and zeal, the Crafts Council of India gave her a grant and she also managed to get two business partners. Mohammed Salim Sofi and Farooqh Amar Ghanai were both pashmina weavers before they decided to team up with Arifa to start Incredible Kashmir Crafts that sells hand-made 'numdha' rugs.

Making numdha rugs is a long and labourious process that involves carding the wool, spreading it on a grass mat and compressing it manually. The work is not just back-breaking but often leaves the artisans with bleeding palms. This, of course, is not the end – the painstaking embroidery on these merino wool rugs, done by women, is no easy task either. Says Arifa, "I want to revive numdha making. The artisans are paid so less that they are no longer interested in this craft. These days only old artisans know this specialised craft. The youngsters are getting educated and they are ready to do lowly paid jobs rather then this back-breaking hard work."

Arifa wants to change that attitude. She hopes to one day set up a company with artisans as shareholders so that everyone benefits from the revival of this dying craft. She started out by employing 15 workers, paying them three times the amount they would usually make. It was her empathy towards the craftsmen that convinced Sofi to become a partner in her business. He says, “I decided to join her because I saw she was very innovative and had her heart in this. She has an attachment to the artisans and thinks differently." 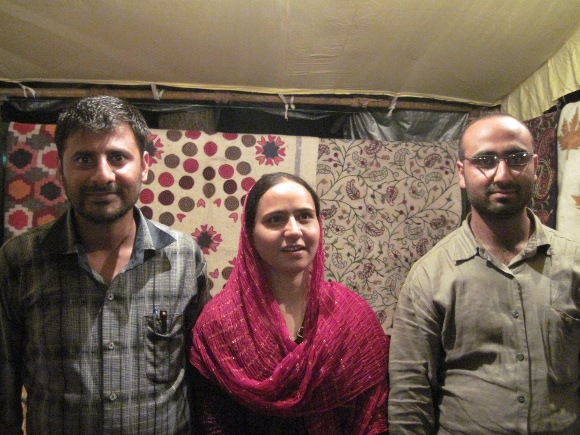 Arifa (middle) with her business partners, is the owner of Incredible Kashmir Crafts through which she hopes to revive the dying craft of 'numdha' rugs. Pic: Renu Agal\WFS

Her other business partner, Ghanai, is enthused with the response their effort is getting. He acknowledges that “the peace which has prevailed in Kashmir over the last two-three years has helped,” adding, “Tourists are coming and they bring business. That means artisans get regular work and they do not think of alternate employment.”

Arifa's life has completely changed. This shy, diminutive girl, who till a few years back, was being reprimanded for coming home late, is now travelling on her own looking for new markets and attending exhibitions. Says the youngster, "I could only do this because of the full support of my father. Some of my relatives still do not know what I do. Even my brother doesn't like my doing business."

Kashmir is certainly not the easiest place to do business. But the successive state governments have been making efforts to help young women entrepreneurs. In fact, former social welfare minister of Jammu and Kashmir, Sakina Itoo, had made available a fund of Rs 10 crore to the Women Development Corporation of the state (JKWDC) for supporting women entrepreneurs in their ambitions.

Accepting that it's not been easy for Valley women to start enterprises, Dr Naheed Soz, Managing Director of JKWDC, says, "The last 20 years or so has seen the women getting house-bound because of the law and order situation. The Kashmiri woman is very able and has been sewing, embroidering and doing small work from home. Now, we need them to come out and we are helping them market their products directly. Once they get the courage to stand on their feet, they will be able to succeed in their business."

Gazalla Amin, an agricultural entrepreneur, who has an aromatic oil business, is a rare example of success. She has been in the business for the past six years and today her agri-business has a turnover of Rs 1.5 crore. She says, "Being an entrepreneur in Kashmir is challenging because we are a developing society and a conflict zone and if you are a woman it's even more so."

Gazalla enumerates the many difficulties women like her encounter. "The finances are hard to come by, society doesn't accept women entrepreneurs easily and it takes years before one can establish oneself. All of these make it an extremely daunting task and that's why it's rare to see women entrepreneurs," she explains.

It is tough for a woman to gather enough finances because there is always a question mark about her ability to sustain her business and market her produce. Moreover, the conservative Kashmiri society doesn't take kindly to women, who travel by themselves, are out of home for long hours - something that needs to be done to ensure success in business. "There are often problems for such women when they want to get married," adds Gazalla.

Young Arifa, however, brushes aside these concerns and prefers to be optimistic and focus on the positives. She says, "I think, today the mindset has changed quite a bit. Even the thinking of boys has changed. Now, I can think of becoming someone, before becoming someone's wife."

Surrounded by the chaos and cacophony of the alternating violence and peace in the Kashmir Valley, Arifa is content; she has managed to create an oasis for herself and her dreams. (© Women's Feature Service)