In remote villages of Rajasthan women are assembling small, portable solar lamps and then travelling to different hamlets in the region to retail them. Renu Rakesh reports.
07 November 2016 -

Rukmani Devi Katara, Maya Roat, Babli Devi… have many things in common; they live in remote villages in Rajasthan’s Dungarpur district, share a tribal heritage, have lived with abject poverty for as long as they can remember. However, today, it’s not their deprivations or their culture that binds them; instead it’s the pride of becoming capable entrepreneurs. 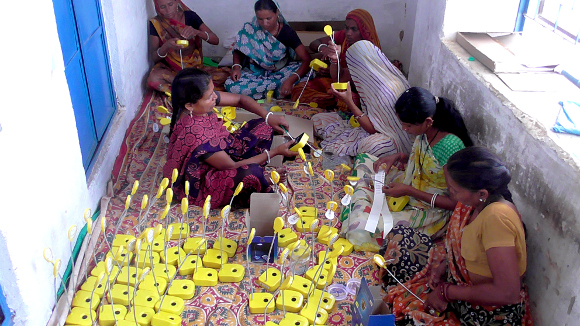 Women come in everyday to the assembly unit to work. Pic: Renu Rakesh\WFS

For that is what these women have become thanks the Solar Urja Lamp (SoUL) project, the brainchild of Indian Institute of Technology (IIT) Bombay underway in their district with the support of the Rajasthan State Rural Livelihood Mission. It was an intervention that was aimed at ensuring clean energy lights are made available to boost children’s education in the area – just 49.8 per cent households in Dungarpur are electrified – but it has also ended up empowering tribal women who are making a decent living assembling and retailing small, portable solar lamps.

A resident of Mandava village Rukmani, 30, could only study up to Class Eight because her parents felt that contributing to the family income was far more crucial to their survival than gaining an education. She, however, has put no such restrictions on her four children for whom she has planned a very different future, one that she feels she will be able to realise because of the solar lamp assembly work she has been involved in since May this year. “I have been able to make good money in these last couple of months, which I want to use to ensure that my children complete their education and get the kind of jobs that we couldn’t even dream of. My elder son is doing an engineering diploma, one daughter is in Class 10 while the younger two are in Classes Eight and Seven, respectively,” she declares proudly.

IIT Bombay has launched the Solar Saheli venture, as part of its SoUL project, in 281 villages spread over Dungarpur, Dovara and Jhonthri blocks in the district. Initially, the Rajasthan State Rural Livelihood Mission, or Rajeevika, stepped in to organise the women into four clusters of 40 Self Help Groups (SHGs) each. Every cluster has five office bearers, all women. Before the project actually began, trainers from IIT conducted a comprehensive training programme, divided into two stages, at the Krishi Vigyan Kendra in Dungarpur.

Over 10 days, women were familiarised with instruments such as the millimeter and solar panels, and then taught to put the solar lamps together. The second stage of training consisted of learning marketing techniques. Once the women successfully completed this module, presidents of the four clusters signed a Memorandum of Understanding (MoU) with Chetan Singh Solanki, professor of solar energy at IIT-Bombay and principal investigator of the SoUL project, in the presence of Rajasthan’s Minister of Rural Development and Panchayati Raj, Surendra Goyal. 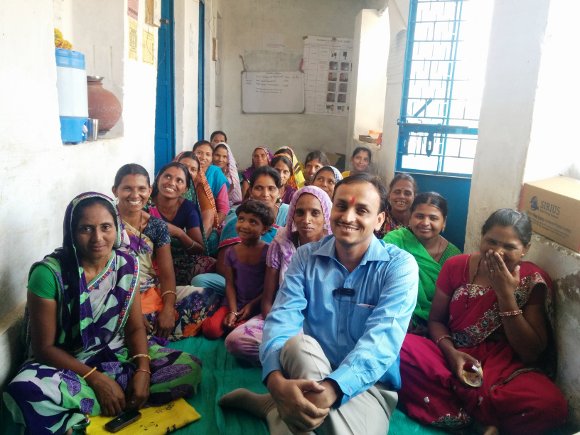 Prof. Solanki of IIT Bombay with women who have been trained to assemble solar lamps. Pic: Renu Rakesh\WFS

According to Prof. Solanki, SoUL project was initiated a couple of years ago to ensure energy efficient lighting to school children in areas where kerosene lamps are the only source of power after sundown. So far, under this intervention, solar lamps have been distributed to one million children in Maharashtra, Madhya Pradesh, Odisha and Rajasthan.

The Dungarpur project, however, has turned out to be unique, as it empowers children as well as their households. Whereas 13.5 per cent of Rajasthan’s total population is tribal, the majority of them, 77 per cent, live in small hamlets dotting hilly Dungarpur. As a first, each home in the project area can buy up to three lamps – two for children and one for the mother.

“Communities in these parts live in widely dispersed settlements and the hilly terrain makes access to these areas difficult. This simple intervention has made a lot of difference to their everyday lives. Most of them are using the lamps for outdoor activities. They say they are no longer afraid of stepping out after hours, especially during the rainy season when snakes and scorpions abound this countryside,” shares Prof. Solanki. The lamp emits 150 lux light and has a 12-by-12 cm solar panel, which can be detached for charging.

The market price of the solar lamp is Rs 500 but villagers can buy it at a subsidised rate of Rs 200. The remaining Rs 300 is being contributed by Idea Cellular. Out of the Rs 200, Rs 80 goes into the cluster’s corpus, Rs 55 to IIT-Bombay and Rs 65 is absorbed as the operational cost - rent of the assembly room, and honorarium and transport for the women. There is a six months warranty on the lamps. Five women from each cluster have been trained to conduct repairs, if the need arises.

The clusters have set up assembly units at Jhonthri, Punali, Biladi and Antri, where, until July 15, 86 women had assembled 19,450 lamps; of these, 14,700 had been distributed in 90 villages. Each woman makes Rs 10 for assembly and Rs 15 for distribution of a lamp. Until July, each one, on an average, had made Rs 5,000. Of course, there have been remarkable exceptions, too. 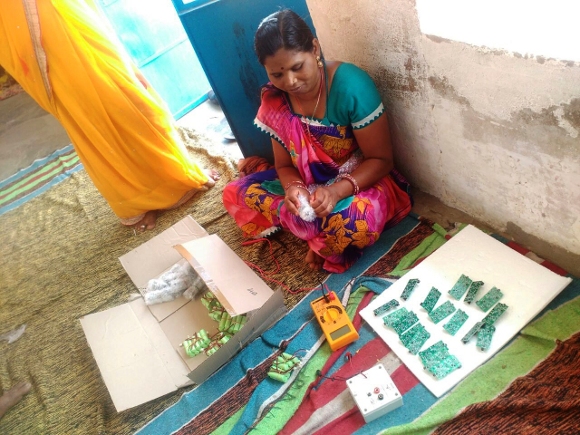 The women are now familiar with all the parts of the portable solar lamp that they assemble efficiently. Pic: Renu Rakesh\WFS

Maya Roat, 30, has been religiously going over to her cluster office at Antri – it’s a seven-kilometre-long walk – to assemble solar lamps. She used to toil all day as an exploited farm labourer but this vocation has restored her dignity and confidence. In three months, she has earned Rs 13,000. She remarks with a beaming smile, “I have never seen so much money in my life. I don’t know what to do with it!” Maya has four children and her mother-in-law lives with her. Her husband, Ramesh, seldom works and is dependent on her earnings.

Rukmani and her friend, Babli Devi, 47, of Padli Gujreshwar village, have managed to make even more. Babli made a tidy Rs 20,000 over two months – June and July. “It all depends on how much you can work. There’s more income in distribution so I focus on sales,” she reveals. For distribution, the women are required to visit a village two days prior to the start of sale. They have to distribute pamphlets and use audio messages to inform people about the advantages of using a solar lamp.

Like Babli, Rukmani is a star saleswoman. She sold 1,300 lamps in the very first month and made Rs 19,500. Previously, she used to work as a labourer and made a maximum of 6,000 a month. Her husband, Kamlesh, had a tea stall where he made Rs 500 daily but ended up spending Rs 200 on kerosene. With her enhanced income Rukmani has rented a small shop for Rs 2,000 where she wants to retail solar lamps.

Before the first phase of the Solar Saheli venture came to a close in September, the women had hoped to sell 40,000 lamps. In the second phase, they are gearing up for training which will enable them to set up small-scale solar power plants and solar repairing centres. Moreover, each cluster hopes to build a corpus of Rs 12 lakhs, from which women can take loans to start up their own solar enterprises.

On his part, Prof. Solanki has an eye on the bigger picture. “With this model, the entire country can be electrified in two to three years. We want to make sure that no child in India has to give up studies because his/her home is without electricity. During my stay in Dungarpur, I learnt that most rural families spend an average of Rs 200-250 on electricity for a single-phase domestic connection. I am working on a model where I can completely take them off the grid by providing them with three LED lights, one flashlight and a mobile phone charger for Rs 250 a month,” he elaborates.

These expansion plans obviously indicate sustained work opportunities for Dungarpur’s team of solar ‘sahelis’ and they are indeed ready for the challenge.