Ela Bhatt's narrative of SEWA's efforts to bring justice to the lives of poor women reasserts the place of work in human existence. Neeta Deshpande reviews We Are Poor, but So Many.
03 August 2011 -

At its heart, Ela Bhatt's We Are Poor but So Many, an account of the work of the Self-Employed Women's Association (SEWA) founded by her, is a book of stories. The chief ingredients in this narrative of SEWA's work with poor, self-employed women in Gujarat are real-life stories of its members and leaders, its milestones, struggles, and hurdles en route. Like any good storyteller, Bhatt focuses on the telling, letting the stories speak for themselves. What emerges is a gripping narrative of the women's battle with poverty and prejudice, and SEWA's significant role in bringing change to their lives.

Summarising SEWA's efforts and achievements briefly is not easy, given the vast scope of its work which positively impacts several aspects of the lives of its poor, working members. Established in 1972 in Ahmedabad, SEWA fulfils the complementary roles of a trade union of self-employed women to address their work issues, and a conglomeration of trade cooperatives to make them owners of their own labour. It enables its members to build and own assets, withstand competition, and access health care, child care, shelter, insurance, and credit.

SEWA's membership of rural and urban women working in the informal economy has burgeoned from 320 women in 1973, to about 12.5 lakh women across the country as of 2009. Bhatt has based her lifelong labour of love on the profound belief that women must be placed "at the center of economic reform". In her own words: "There is ample proof to demonstrate that women can and do build strong, vital organizations around issues that are relevant to them, find viable solutions out of their own experiences, and in the process change our society and environment in a healthy, respectful, nonviolent, and sustainable way."

Bhatt's vision extended the conventional idea of a trade union to an entirely unconventional terrain. Whereas most trade unions in the world are constituted of workers in medium or large-scale enterprises which are part of the organised industry, SEWA was the first union of its kind whose members were poor, self-employed women from different communities scattered across a variety of trades.

As author Kalima Rose writes in her 1992 book on SEWA, Where Women are Leaders, "SEWA organizes women who work in their homes, in the streets of cities, in the fields and villages of rural India, with no fixed employer, carving their small niche in the economy, day by day, with only their wits to guide them against incredible odds of vulnerability, invisibility, and poverty."

Bhatt's memoir of SEWA revolves around the lives of these gritty and courageous women. They constitute and lead the movement, and devise novel approaches to knotty problems, defying social barriers, and pointing to the way forward with the example of their own lives. Lakshmiben Teta is one of them, a vegetable vendor whose "attachment to her place on the pavement is particularly understandable". After all, she gave birth to one of her seven children right on the pavement!

Bismillah, another determined old woman, would procure good-quality chindi (pieces of scrap strips of fabric discarded by mills) from a SEWA shop and sell them from house to house, while her husband napped in the afternoon. Despite his scoldings and beatings, Bismillah persisted with her work and soon got a job at the shop. And sure enough, her husband started arriving there every noon - a tiffin box with hot lunch in hand!

Used clothes dealer Chandaben, whose faith in the group's ability planted the seed for SEWA's successful experiment with banking, has an inspiring story to her credit. At a SEWA meeting in 1973, Chandaben asked Bhatt why the women couldn't have their own bank. Bhatt patiently replied that a large capital was required to start a bank, something they didn't have. To this, Chandaben replied, "Well, we may be poor, but we are so many." This firm belief in the unified strength of her compatriots led to the birth of the SEWA bank, which boasts of 60,000 members and a working capital of nearly 103 crore rupees as of 2007-08.

"SEWA is made up of thousands of women . who overcome great odds to change their lives and their environments", writes Bhatt. "They are the ones who keep detailed minutes, maintain faultless accounts, and speak with conviction." 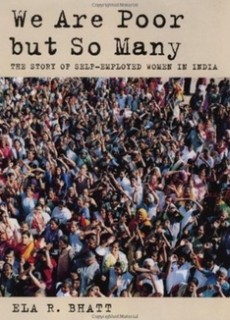 SEWA's work has always been a rough ride, demanding dogged efforts and a constant battle with hurdles along the way.

SEWA's work has always been a rough ride, demanding dogged efforts and a constant battle with hurdles along the way. After almost four decades of committed work, the women often find themselves back to square one, to building their lives back after a family illness, a natural disaster, or a communal riot. One must also realise that years of organising, mobilising and fighting for their rights moves the women forward by only so much. Poverty is ever present, the daily grind is inescapable, and prejudice and exploitation continue to be formidable opponents. For every step forward, there still remains a long way to go.

The author likens the efforts of the women at SEWA to that of a spider which "climbs, falls, but does not lose hope". The fight of the chindi workers for a wage hike for stitching quilts from scrap pieces of fabric helps one to realise that this comparison is not merely metaphorical. When the chindi workers met in small groups in the late seventies to talk about their problems, stones were thrown by vested interests. Undeterred, the women sent a letter with their demands to the president of the Association of Chindi Traders, demanding an increase in wage rate from 0.60 to 1.25 rupees per quilt. The association responded by withholding the supply of work.

Defying family and societal pressure, the women went one step further. They held a sparsely attended rally on the streets, shouting into microphones. An agreement was signed between the traders' association and SEWA that the traders would pay 1 rupee per quilt; however, it was never honoured.

SEWA then filed a formal complaint with the Labour Department, despite the fact that for all practical matters, the unorganised sector fell outside the ambit of its work. After months of dirty games, the traders finally agreed to a rate of 1 rupee per quilt in the presence of the Labour Commissioner; the actual rate paid, however, fluctuated between 0.80 to 1 rupee. Moreover, the last straw was that the price of thread went up, wiping out any benefits of the wage increase.

It was only when the state government levied a sales tax on chindi, and SEWA argued that the tax should not be removed till the workers' demands were fulfilled, that the traders started paying Rs. 1.25 per quilt. It was as if the spider had ultimately succeeded in fastening its thread, thus stretching the first line of the web it was endeavouring to weave. Continuing to build on this success would entail more impediments and more fighting back; more of falling, getting up, and climbing again. No matter how often they must begin weaving their webs of work from scratch, SEWA's women seem to follow the spider as their lodestar. Her story has taught them to never say never.

Structured in chapters which either describe the efforts of SEWA members engaged in one particular trade to fight injustice and exploitation in order to earn a reasonable wage, or the organisation's diverse endeavours such as banking and healthcare, the book makes for compulsive reading. Bhatt writes passionately about the rag pickers who trained in other skills and formed cooperatives with beautiful names: Vijay for the weavers' cooperative, Gitanjali for the stationary producers' cooperative, Saundarya for the cleaners' cooperative, and Sujata for the cooperative of the majority of rag pickers with SEWA who preferred rag picking over learning other skills.

Unrelenting, grinding and debilitating, poverty pervades every aspect of life for many members, and the reader cannot escape this. A simple description of the living and working conditions of the rag pickers, chindi and garment stitchers, vendors, and embroiderers who are part of SEWA, exposes the reader to the brutal reality of what it means to be a poor, working woman.

The arduous labour of those who make salt from subsoil brine in Gujarat's Surendranagar district provides a glimpse of how stark and painful life must be for them. Reading Bhatt's description of their severe conditions makes one look at this ubiquitous commodity as if with fresh eyes. With SEWA's efforts to organise and train the salt farmers, provide them technical assistance, and link them with the market, the farmer now gets 20 paise for every rupee's worth of salt, up from 5 paise.

Such hard-won achievements are grounded in novel, creative and practical approaches to age-old barriers. The SEWA bank solved the problem of identification of its illiterate members by appointing a staff photographer in the bank itself, who would take pictures of new account holders holding a slate with their name and account number written on it. Moreover, the women had the option of leaving their passbooks in the bank for safekeeping, so that their families would not learn about their finances!

Bhatt's levelheaded approach to failure reflects the patience and resilience of the women of SEWA, without which any victory would have been impossible. The book recounts hurdles and failures at each step, but the reader is left with the promise of that next step forward.

We Are Poor but So Many: The Story of Self-Employed Women in India by Ela R Bhatt; published by Oxford University Press, New Delhi; First published in India in 2006; pp. 233; Rs. 345

Despite the enormous difficulty of its task, and the breadth of its victories at both a personal and organisational level, this story of SEWA is told with humility. Bhatt, who is inspired by Gandhian ideals, shares a simple realisation she arrived at while organising the women. "A union" she writes "is about coming together. Women did not need to come together against anyone, they just needed to come together for themselves (emphasis in the original). By forming a union - a bond - they affirmed their status as workers, and as a result of coming together, they had a voice." In the current atmosphere of antagonism which permeates rights-based struggles and discourse, this insight merits special attention.

Bhatt's simple narrative of SEWA's efforts to bring justice to the lives of poor women makes for an absorbing read, and reasserts the place of work in human existence. Work can mean different things to different people. In a November 2004 paper in the Economic and Political Weekly, Bhatt and her colleague Renana Jhabvala quote Puriben Ahir, a woman who lives in the desert village of Madhutra and has done many types of hard manual labour, but is also a skilled embroiderer.

Puriben's conception of work is at once pithy and profound: "My whole life has been a search for getting enough to eat for my family, having enough water, sending my children to school and just being able to live a decent life. I have never been afraid to work. In fact, for us, work is life."

BACK TO SCHOOL : Meaningful restart of education is critical
MORE ARTICLES
on similar topics ...
BOOKS