Over 1400 families who had started living on the rubber plantation of Harrisons & Crossfields -- the Chengara struggle -- will now get land in a deal brokered by the Chief Minister in the presence of the Leader of the Opposition. P N Venugopal takes stock.
28 October 2009 -

During the last two years, Chengara in Kerala had become the symbol of a silent war for land. Unlike in Singur or in Nandigram, it was not against eviction. Instead it was the fight of those who toiled in land, but never possessed any cultivable land, asserting their right to own sustainable land in a society that professes equality and fraternity.

The agitation at Chengara in Pathanamthitta district had commenced on August 4, 2007, when 300 families from various parts of the state converged on the rubber estate owned by Harrison Malayalam Plantations Ltd and pitched up thatched sheds and started living there. Their number swelled by the day and at one time, there were as many as 5000 families, majority of them dalits. Their demand was five acres of land for cultivation and Rs 50,000 as financial assistance per family. The demand was later reduced to one acre of land. 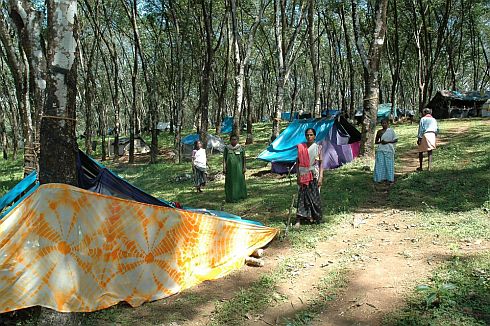 Once owned by Harrisons & Crossfields of Liverpool, the plantation is now in the hands of R P Goenka group. Most of the land is under lease from the government and the allegation of the agitators is that the company is in possession of much more land than the actual extent under the lease. If the company can encroach and get away with it, we too are justified in doing the same has been the refrain of those who settled there.

The existence of the settlers was precarious. Not just due to the steep slope of the four hillocks that constitute the plantation, but lack of food, scarcity of water, lack of medical facilities, hostile weather, all contributed. 13 people died during the period due to lack of medical care. Even though clouds of violence loomed large in the horizon, there was no bloodshed as the activists were determined not to be provoked and as the government was handicapped by a Kerala High Court order, which bound the government to evict the settlers without shedding even a drop of blood.

After 790 days, the struggle has been settled at a discussion convened by the Chief Minister V S Achutanandan with Laha Gopalan and others of the Sadhu Jana Vimochana Samyukta Vedi (SJVSV), which spearheaded the agitation. Leader of the Opposition, Oommen Chandy also participated in the talks.

1432 families out of the 1738 families who had started living on the rubber plantation of Harrisons will get land and financial assistance to build houses, as part of the settlement.

Keralas population exceeds that of Australia by one crore, in an area that is 200 times less than that of that continent. Vast tracts of Kerala's agricultural land have been converted into residential areas.

We had no options other than accepting the package, says Laha Gopalan, President of SJVSV. The settlement was being imposed on us and there was the looming threat of violence by the CPI(M). Of late there have been allegations by the SJVSV that the CPI(M) was intimidating and also purchasing their activists. Selena, general secretary of SJVSV and the person in charge of the camp confirmed that seven families had left the camp making a show of it and had aligned themselves with the (Communist Party of India, Marxist). Whether purchased or not, it is a fact that the CPI(M) was able to make inroads into the Chengara estate and the apprehensions of crumbling unity, apart from the omnipresent poverty and sufferings of the days of struggle might certainly have persuaded the leadership to accept the package.

The Chengara land struggle has been an acid test for CPI(M), which leads the Left Democratoc Front (LDF) now in power in Kerala. The party, which has traditionally approached issues from the class perspective rather than the caste angle and have seen a steady erosion of support from the dalit communities over the years, tried to play it cool in the early days of the struggle. But it was drawn to the vortex of the problem with the trade unions of plantation workers arraigning themselves against the settlers at Chengara. The combined forum of all trade unions had alleged that their members, the rubber tappers, had lost their jobs because of the encroachment of the estate by the SJVSV. The trade unions blockaded the entry/exit points of the estate and we had to innovate paths through the forest to reach the outside world, says Selina.

The allegation that our action deprived them of their livelihood is false, says Gopalan. Harrisons had already earmarked the area we occupied for replantation and there were no one working there. C R Neelakantan, environmental and social activist, who had been with the agitationists from the early days, corroborates. It was only when the government indicated that it would do a survey of the land occupied by Harrisons, that the trade unions started the blockade.

Selena, general secretary of SJVSV and the person in charge of the settlers camp. Pic: P N Venugopal.

The SJVSV had alleged that the company had encroached almost 5000 acres in excess of what they were lawfully eligible to hold and that "the blockade itself was Harrison sponsored". On a visit to Chengara, one month ago, the blockading workers had confessed, rather naively or innocently, that everyday they report to the company office, from where they were taken in a jeep to the estate entrance and also that they were paid half-day wages for the blockade. Next day another batch of workers would take over.

One of the positives of this settlement is the undertaking by the government to complete the survey of the estate within three months, says Neelakantan. If the survey results prove the allegation of encroachment, it is bound to produce a chain reaction and all plantations in the state will have to be surveyed. The plea of the government is that it does not have enough land to meet the demands of the landless, points out B R P Bhaskar, senior journalist and political observer. But the real picture will emerge only on a comprehensive survey of Kerala.

Bhoomikeralam a project of the Kerala government to do the resurvey of the state with funding assistance from the central government had been launched in August 2008. The immediate tasks streamlined for it, was the survey of land that could be distributed to the tribals and the land in possession of Harrison Malayalam Plantations. In a media briefing on October 10, A K Balan , Minister of Backward and Scheduled Communities had stated that the survey had made much headway as far as the land to be distributed to the tribals and 15000 families would be benefited this year itself. But nothing has been done as yet as far as Harrison Plantation is concerned.

Despite bitter allegations of betrayal and conspiracy by the ruling and opposition parties to deny the dalits land for cultivation, the general consensus is that the Chengara land struggle was a success. Those who have six cents of land have been denied land under the package, says Gopalan. However we proved that dalits can lead their own struggle without intermediaries.

Despite the land reforms of that were implemented in the 1970s, those who toiled on the land never possessed land, says B R P Bhaskar. Now for the first time the government has conceded land for cultivation rather than for dwelling place. He asserts that 50 cents of land is a viable cultivable extent from Kerala standards, even though inadequate. It is a trend setter, opines Neelakantan. Indeed, the land struggles in future will have this precedent to quote.

Still, there is a general apprehension that what has been promised by the government will not be delivered within three months. But the SJVSV has a solution for this. They will vacate the Chengara estate only on being allotted alternate land as envisaged in the package. It is quite simple, says Selina. Most of us were living in makeshift huts on the roadside or on other government lands before moving into Chengara. Those huts are no more there and we have nowhere to go.

Land is power in Kerala as elsewhere in the country. But it becomes all the more precious here, when the density of population is 819 per sq km. (Keralas population exceeds that of Australia by one crore, in an area that is 200 times less than that of that continent). Vast tracts of agricultural land have been converted into residential areas. Industry, infrastructure and tourism too demand their share of the cake. Tremendous political will and meticulously planned action are required for solving the land-inequities of Kerala. (Quest Features & Footage)