Will I get my dry firewood?

It seemed like an insignificant demand, but in fact it is filled with meaning, and the answer has remained challenging in more ways than one. R Balasubramaniam continues his series of Voices from the Grassroots.
02 August 2010 -

This incident occurred many years ago. A very sensitive and humane public official, Subbaraya Kamath was worried about the consequences of the displacement that was being planned by the Forest department in Sunkadakatte forests in the Nagarahole National Park. He along with Vijay Lal Meena, the then Forest office-in-charge of the park were to meet with the tribals living in the forests and discuss the potential consequences of shifting or not shifting them out of the forests. He had requested that someone from the organization be with them when they engaged in these difficult and tense conversations with the tribal community.

My colleague Poshini, who heads the Community Development Services of SVYM was the ideal choice. She was not only conversant with the issue, but had a unique and one-to-one relationship with most of the tribals in H D Kote taluk. Moreover she was very sensitive to the aspirations and needs of the tribals and would make sure that the tribals found an empowered voice in these negotiations.

The discussions started with the usual business-like approach that the Government officials are comfortable with. Poshini had to repeatedly intervene to remind them that they were here to listen to the people rather than merely tell them what needed to be done. She was getting uncomfortable that the tenor of the discussions was getting prescriptive, and she requested Kamath to first explore what the people's feelings and fears were. 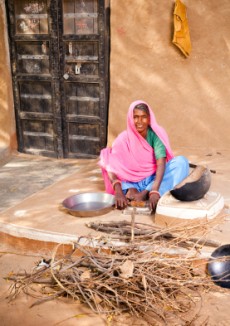 These people did not interpret poverty as living with less than a dollar or two a day. Nor did they see development coming through as a Government intervention to augment their daily income alone.

Slowly the mood and environment changed and the officials became more comfortable with trying to understand what the people were saying. They started to realize that there was a huge gap between what they had perceived and what the grass root reality was. People and their interpretation of poverty and their problems were so different from the traditional government understanding of the same. These people did not interpret poverty as living with less than a dollar or two a day. Nor did they see development coming through as a Government intervention to augment their daily income alone.

It was indeed a great lesson to be learnt for any sensitive and curious person. But then, there are indeed very few within the system that are sensitive enough to pick these signals and even lesser who are patient and humble enough to listen to these voices from the grass roots and still fewer who actually act on them.

What remains in my memory is what transpired a little later. Meena was trying to comprehend what the needs of these simple people were, and how the department could help meet them. As he went around asking people this question, an elderly lady of more than 70 years in her own simplistic way wanted to know whether she would get her daily requirement of dry firewood if she moved and settled outside the national park?

The officials were surprised at this small and insignificant (in their view) demand. Poshini also felt crestfallen that this lady had to ask for only this. As I sit back and think about this incident, this question is so filled with meaning for me. I remember the views of Amartya Sen in his book Development as Freedom, wherein he talks about people having the freedom to choose what they value. The question that this elderly tribal woman asked is so pregnant with meaning and the answer would be challenging in more ways than one.

How could a Government that only understands development in mere economic and measurable terms be able to interpret and deliver to this 'voiceless' citizen? How would development experts be able to integrate social, cultural, political, and other basic rights into their frameworks? How will anyone understand that 'development' goes beyond looking at mere utilitarian and libertarian issues? What place will 'personal freedom' and 'choice' have in the various schemes that the Government planners conceive of? Will the voice of wisdom from this inconspicuous tribal hamlet in a geographically challenged setting find any place at all in the way the government thinks of displacement and development?

How could anyone amortize and measure the value of dry firewood being available each day for this tribal woman whose life revolves around the forest and what it provides? Could we even conceive this concept so well propounded by Sen and factor it in the different development programs that socially conscious Governments and well-meaning NGOs conceive and implement?

BACK TO SCHOOL : Meaningful restart of education is critical
MORE ARTICLES
on similar topics ...
ADIVASIS