The recent SC order directing the Centre to protect people, who come forward to help accident victims, from legal and other hassles, is a significant step towards reducing road accident fatalities. Shoma A Chatterji examines the broader social psyche and issues to be addressed to make the world more humane.
07 November 2014 -

We live in a world spilling over with violence across time and space: inside our homes, in educational institutions, in workplaces, while travelling in public transport and on highways, streets and by lanes. Almost as if on reflex, we turn away from such incidents, unless we are victims ourselves. We are convinced that interference or intervention, even to help victims of violence, would temporarily jeopardise our lives in different ways. It never occurs to us that when we are walking away from a victim of an accident or an assault, who lies bleeding to death on the streets, we are in fact indulging in a second attack of violence on the same victim. It is passive violence because it is abstract and formless, expressed only through the action of watching and then moving away.

This evasive action of avoiding involvement in whatever we feel “does not concern us directly,” has a name. It is called the “Bystander Effect.” The Bystander Effect, writes Erin Anderssen (in The Globe and The Mail, March 23, 2013), “was first coined in 1968 by two American psychologists, John Darley and Bibb Latane. The duo began conducting lab experiments which simulated an emergency and then monitored whether people reacted differently alone or in a crowd.

Their research was spurred by the prominent murder of Kitty Genovese, a New York resident whose neighbours reportedly ignored her screams for help. Genovese died in the second attack because when she was attacked the first time in 1964, the same assailant was never caught for lack of witnesses. He attacked her a second time and this time, she died. The killer was never caught, nor was the cause of his attack revealed. There are numerous other cases that show similar behaviour.

Indian filmmaker Atanu Ghosh, who has made a film based on the same phenomenon says, “Browsing through videos on Youtube, I came across a clip that showed a 74-year-old man knocked down on the street in London. He lay unconscious till he died. That was the first time I heard about the Bystander Effect, the socio-psychological phenomenon that refers to people who do not offer any help to a stranger in crisis.”

Ghosh says this made him curious to study in more depth the experiment of a mock crisis on the street, primarily to check on the nature of the Bystander Effect and also to explore if ‘humanism’ is alive or dead today. His film is called Ek Phali Rodh (A Slice of Sunshine), a metaphorical name signifying light at the end of the dark tunnel of passive violence, a light in which human beings will emerge more humane.

Reality however, is more brutal, irreversible and cruel than celluloid. On 20 October 2011, Keenan Santos and Reuben Fernandes lay dying on a street outside a Mumbai roadside paan shop after being stabbed repeatedly by a group of young men who were teasing the girls accompanying them, in front of watchers – no less than 50 who silently stood by and watched without raising a finger or voicing a whisper of protest. Even when the girls screamed for help, not one person came forward to lend a helping hand.

Both young men died in the prime of their lives not only because they were attacked by the culprits, but also because the bystanders did not do anything. In this day and age of mobile phones, one cannot help wonder why no one calls for medical or police help during such street crises, when they are ever ready to click pictures of almost anything and everything!

History keeps repeating itself, as was brought to light in one of the most heinous instances of passive violence in contemporary history. In a television interview, the male friend of the medical student who was brutally gang-raped in Delhi on 16 December 2012 fleshed out in almost graphic detail, how when stripped, beaten up black-and-blue, the girl raped and grievously injured, the two of them had been thrown off the bus on to the street, not a single passer-by responded to their plight and simply went their way.

“We tried to stop passers-by. Several auto rickshaws, cars and bikes slowed down but no-one stopped for about 25 minutes. Then, someone on patrol stopped and called the police. Even if a single person had come forward earlier, the story that night could have turned out differently,” he said.

This is not just about two young men killed by gangsters because they protested the latter’s lecherous behaviour, or about a gang-rape inside a Delhi bus. Nor is it about hit-and-run accidents. This is about witnesses who refuse to react and instead, often look the other away, insensitive to what will happen to the victim/s.

Do we get some sort of malicious enjoyment from seeing other people in crisis? Are we cowards afraid to take action? Are we running away from the social responsibility of helping a fellow-human in desperate trouble even when it can lead to the death of the person? The answers to these will spell out the exact causes and psyche behind what is called ‘passive violence.’ 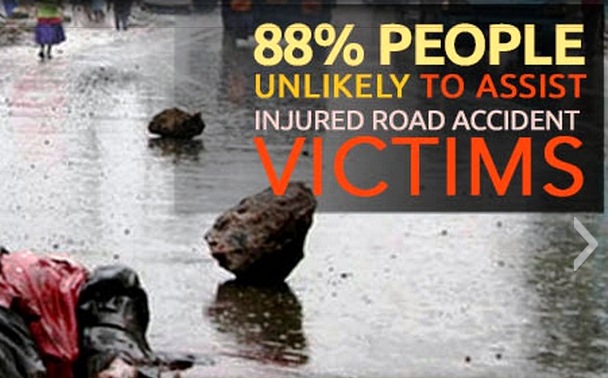 Piyush Tewari, Founder and President, SaveLIFE Foundation, a Delhi-based NGO says, “The Law Commission of India states that 50 per cent of those who die due to Indian road accidents can be saved if they receive timely medical attention including assistance from bystanders and passers-by. An astounding 70,000 lives can be saved every year.”

SaveLIFE Foundation recently floated a petition addressed to Harsh Vardhan, Minister of Health and Family Welfare, Government of India and appealed to everyone to sign it. “I began this petition asking the Union Minister to introduce a Good Samaritan Law in India that will protect and encourage Good Samaritans to help injured people on the road.”

The Foundation also filed a Public Interest Litigation (PIL), in which it claimed that “75 per cent of bystanders do not help a road accident victim fearing harassment at the hands of police, hospital authorities and possibly being made a witness in court.” They sought orders directing the government to implement the recommendations of a high-level committee in terms of helping and protecting those who help road accident victims. This order would remain effective till Parliament enacts a law to provide protection to Good Samaritans.”

On 29 October, in response to the PIL, the Supreme Court directed the Centre to pass an executive order to protect Good Samaritans, who rush road accident victims to hospitals, from harassment at the hands of police and from being summoned as witnesses in court. The order came from a bench comprised of Justices Ranjan Gogoi and R F Nariman.

The judgment, though a huge leap forward, focusses on victims of street accidents only. There are a hundred different crises or instances of victimisation in public spaces in the same city at the same time and many of these might not relate to road accidents in any way. That leaves the question of addressing the menace of passive violence gaping open.

Contrary to common perception that this is perhaps an Indian behavioural trait, history shows how universal the Bystander Effect is and how much of passive violence it embodies. In their recent book Indianomix – Making Sense of Modern India, authors Rupa Subramanya, a journalist and Vivek Dehejia, an economics professor, look at a contemporary episode in China where a toddler lay dying on the street and no one came forward to help.  “From biology, we know that altruism – whether in humans or in the animal kingdom – is a fragile commodity. Whatever altruistic tendencies are latent in human beings contend with the equally powerful human instinct of self-preservation,” writes Rupa.

Simply stated, a passer-by watching a street crisis where a person is being hurt or attacked or suffering pain and injury, even when driven by altruistic tendencies will withdraw from coming forward when he weighs this against the consequences of his altruistic behaviour – legal hassles, time wasted in court proceedings, fear of reprisals from the guilty, etc. The authors have documented cases from India and China where saviours were harassed because they stepped forward to rescue and help.

Eric Anderssen adds, “While human behaviour tends to fall into patterns, they are more complex than we might think. In a recent study, German psychologists pored through the results of more than 100 bystander experiments and data from 7,700 participants going back half a century. They concluded that under certain (rather surprising) circumstances, being in a group can also be a powerful motivator to take action.”

Ghosh says, “The belief that most bystanders and passers-by choose to remain mute spectators due to fear of prolonged legal hassles, subsequent inconvenience and intimidation is not wholly true. The human mind often functions in ways that cannot be explained through logic. For example, a person who is extremely self-centric and is known not to lift a finger to help someone might suddenly jump in a crisis situation to save the life of someone he has never met. The incident might have suddenly changed his hormonal action and he jumps to the rescue. There are psychological and neurological reasons scientists are trying to discover. My film might shed some light on this extremely dark scenario.”

In all of this, a message that must be constantly stressed and driven home is that safety of the self and of others is everybody’s business. “Social responsibility” is not just a fancy and sophisticated term. It should widen its ambit to include our moral responsibility towards our fellow-beings, which we fail to carry out when we indulge in the common collective behaviour attributed to the Bystander Effect. Coming forward to help another in crisis must be seen as a natural and spontaneous reaction, not a heroic act of a “Good” Samaritan.