A storehouse of untapped potential

A majority of poor and low-income workers, especially women, are not aware of how to secure their own income using basic skills. Often, they are clueless about using the skills they have tacitly acquired. Varupi Jain on the starting point for development efforts that aim to help them tap their own potential.
08 January 2007 -

Less is spoken and heard about the informal sector also being a storehouse of untapped potential. But how can people use their potential to improve their lives? How can development initiatives working with informal sector workers be successful?

To begin with, the potential of millions of people is hidden in the sheer heterogeneity of the sector. This article is based on findings that emerged from my research of informal sector women's groups in Haldwani in 2004-05, focusing on motivations driving women towards entrepreneurship. Haldwani (district Nainital) is a semi-urban town at the foothills of Nainital in Uttarakhand. The findings suggested that the many strands of the diversity in the informal sector first need to be identified, acknowledged and looked at separately, before development organisations can intervene.

Interventions - one shoe will not fit all

Any development intervention aiming at bettering the socio-economic situation of people in the informal sector has to take into account the fact that this group is hardly homogenous: on the one hand there are people struggling for survival with little choice but to find odd jobs to secure the basics of survival. On the other hand, however, one finds micro and small firms which clearly show potential for growth and competitiveness and could easily evolve into regularised formal sector firms. The crucial difference between these two groups of people is in the evolution and internalisation of their competencies. 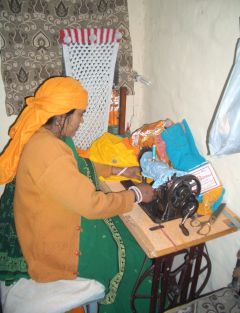 Development interventions therefore need to address these two groups diversely. The poorest of the poor need continued support through donor-driven as well as government programs focussed at poverty reduction. Unless these workers are brought to a certain income-generation level above the poverty line, one cannot start talking to them about competitiveness, growth or export markets. It is the latter group of informal sector individuals who are already in a position to begin the growth transition to a better life. Even here, there is diversity in the types of the people one is likely to encounter.

My research at Haldwani indicated that a majority of the people operating in the informal sector in semi-urban settings in India (especially women) are often not aware of the concept of being able to secure their own income using basic skills. They have never ventured beyond the confines of their homes. Often, they are clueless about the skills they have tacitly acquired. With these groups, development interventions need to begin with the 'basics': acquisition or identification of skill, applying it for self-employment and generating income.

Before we proceed further, a note on the reason for the focus on self-employment, despite it being admittedly riskier than wage-employment. While development efforts also focus on training informal sector people for direct entry into jobs in the formal economy, this cannot be all. For one, there simply aren't enough wage-jobs for everybody. Two, many jobs languish for want of suitably qualified takers. The problem of mismatch between job supply and skill demand persists, and thus self-employment seems to be a viable option. It (often) serves as a more immediate livelihood alternative to an extended search for wage-employment. It also makes informal sector workers independent and self-reliant, and addresses the question of job-crunch and skill-mismatch. In addition to all this, and most crucially self-employment sometimes creates employment not just for the small business owner but also for the staff s/he engages.

Continuing on groups with pliable skills, one also finds instances of people who associate self-employment with putting a skill to use. But the thread seems to break at the most crucial point  while they possess the skill, they do not have what it takes to en-cash it. In other words, while they possess the skill ingredient for self-employment, the other ingredients also crucial in the recipe of competencies for self-employment  abilities, behaviour patterns, knowledge  are missing.

There are instances of people who associate self-employment with putting a skill to use. But the thread seems to break at the most crucial point  while they possess the skill, they do not have what it takes to en-cash it.

•  Training the millions
•  All theory, no practice

For instance, Medha Kumari, a resident of Haldwani, has learnt henna and embroidery work but until now, has been doing it free of cost for friends and relatives. She says that she has told a couple of shop-owners around her house to get back to her, should they need her services. She asserts that she has done all that she could to fetch a job with her skills, and thus her present lack of gainful employment is for no fault of hers.

At the onset, one finds such a reaction smug and almost irritating. But if one considers it closely and objectively, given this lady, her upbringing, exposure and education, her present reaction is the only way she can actually react. Her education and upbringing has not inspired her to venture out, to reach out to potential employers with her set of competencies and ideas. She has been a part of a culture preferring women to be passive rather than active. In fact, she has already been much more active than other women in so far as she has undergone skills training and has let the neighbourhood know about it.

Religious factors, socio-cultural conditioning (predisposing women to set roles) and class and caste differences (determining traditional division of labour within society) are some of the sensitive and not-so-obvious factors which influence people's motivations (or lack of them) behind skills development and entrepreneurship. Therefore, interventions need to take this into account. Often, workers in the informal sector do not have a measure of their own competencies, technical and cultural limitations. In turn, any sensible development initiative must start by addressing these basics.

From income-generation to growth

However, there are others in the informal sector who have crossed this stage of engaging in income-generating activities. As the experience in Haldwani shows, these are micro or small entrepreneurs who have well-established (though certainly limited) structures of production and selling. These include self-employed people offering services like plumbers and masons. They have identified their skills and applied them, thereby taking the first crucial steps on the path of entrepreneurship quite successfully.

The growth of these units, however, is stagnant  and this makes this group of people just right for private sector-based strategies. My investigations in Haldwani focussed primarily on the garment sector which includes stitching, embroidery, dress-designing and other related services. The interviewees generally specialised in ladies and childrens dresses. The group in need of growth strategies falls into three categories relating to their skill deficits, and for each sub-group the intervention needs and strategy are different.

Firstly, there are instances of many established shops or even women operating very successfully from home  who have earned a name in supplying garments, spices, preserved food stuff etc. These business owners are typically keen to expand further. They want to target the markets beyond the confines of their city; some also want to export their goods. However, what they lack is information on market linkages and avenues for expansion. They have the vision but need guidance on how to get there.

This is where private sector strategies can contribute to making their products and services more competitive, helping these business owners in creating greater linkages with distributors and suppliers, enhancing their product range by investing in research and development and in dealing with questions of innovation.

Second, one finds business owners who are perhaps at a degree of success just behind that of the group above. They have somehow reached a certain degree of success in running their enterprise but do no have a vision for progress. They either do not want to progress and expand further, or have never thought about it, or have been so pre-occupied with meeting day to day challenges of running the enterprise that expansion took a backseat.

Here too, development interventions to guide them on the path of progress are crucial. They need to be exposed to possibilities of innovation, targeting newer markets, establishing more linkages with distributors and suppliers and dealing with questions of product enhancement and diversification. Since this group has the potential of progressing more, mechanisms to promote their ambition are the need.

Third, one finds a sub-group who are last also in terms of development and expansion potential. They are satisfied with their limited growth. The growth of their enterprises is stagnant mainly because they have consciously chosen to continue to operate at this particular level. This can be partly attributed to limited ambition and partly to the convenience they see in operating like this: goods produced and sold informally, reasonable profit made, headaches typical to formal sector (taxes, registration, dealing with authorities etc.) avoided. Theyre quite comfortable earning this way, so they knowingly choose not to struggle anymore and continue to operate at a small scale in the informal sector.

In this case, awareness or consciousness needs to be created regarding the benefits of expansion and venturing out of the confines of the informal sector.

All this having been said, encouragement towards graduating to the formal sector has to go hand in hand with it being lucrative for firms to operate in the formal sector. In a country like India, often the process of registering as a formal enterprise is so cumbersome and time-consuming that many firms are put off by the sheer procedural pains it brings along. Simplification of registration procedures, introduction of single-window approach, tax benefits and so on are aspects along which entry to the formal sector can be made more attractive. Another attraction is exposure to various schemes of the local and central government which offer benefits and subsidies  which can be availed only on operation in the formal sector.

The diversity in needs and challenges within the informal garment industry in a town like Haldwani is indicative of the dimensions of the issue across the informal sector in India as a whole.