Where did all the women go?

Vineeta Bal, a former member of the Prime Minister's task force for Women in Science under the Department of Science and Technology, explores the status of women scientists in India in a freewheeling conversation with Pamela Philipose.
07 September 2013 -

Science in India remains a relatively less publicly recognised sphere. Not just women scientists, even their male counterparts remain unacknowledged. This is partly because their achievements have been quite modest, barring those of the occasional Nobel Prize winner. Moreover, investment in science has been paltry, but that has never been a serious concern. So, in a sense, this is a problem that cuts across gender lines. However, it is also true that women have suffered from a specific lag, both in terms of science education and scientific research.

How many scientific women do we have in our myths and history? Everybody talks about Leelavati. But her name crops up largely because she was Bhaskaracharya's daughter. All we seem to know is that he would put mathematical questions to her as a young girl and how she would respond to them with alacrity. Although Leelavati remains an icon, when we think of a great mathematician we would need a different yardstick to measure his or her contribution.

To begin with, there are fewer people who opt for the science stream at school in India, and about 35-40 per cent of them are female. This, of course, is not a bad proportion and, because of this, there is a fairly good percentage of women making it into science at the college level. However, among these, there is a disproportionate number of female students going in for medicine.

About 50 per cent of medical students could be girls. The proportion falls when it comes to the natural sciences . which could be around 35-40 per cent; if you look at engineering it may be around 15 per cent. So these distinctions need to be kept in mind when we talk of women scientists in India.

The science education imparted and the textbooks available also contribute to the lag. Take the findings of Sugra Chunawala, an associate professor with the Homi Bhabha Centre for Science Education, Mumbai. In 2006-07, she had analysed NCERT science textbooks from Class III to Class X by simply looking at the images . not the content . presented. Among the human figures in these textbooks, she found a majority to be men. Women were also shown, but largely as passive onlookers. At the same time, more women were shown in traditional roles. A disproportionate number of nurses were depicted as women, while the doctors tended to be men.

Women scientists often do not want to take on administrative positions like directorships. For one thing, they think it entails too much responsibility, given their domestic commitments. Secondly, existing social realities make it difficult even today for men to take orders from a woman.

•  Can science be women-friendly?
•  Where science falters

The situation within the family is yet another factor, given the almost complete sway of patriarchy within it. As children grow up, they observe the roles being performed by their parents. I know, from personal acquaintance, that often even among couples where the husband and the wife are equally well-qualified, the man is a scientist while his wife, with a science background, is a school teacher because the work schedule in the latter role is considered more conducive to child rearing. Such a division of roles shapes the perceptions of children, which impact very strongly the choices they make when they become adults.

If parents are very well off and there are no financial constraints, they will probably spend equally on the education of their sons and daughters. But in the event of even a minor financial crunch, the daughter is the first to get affected. I have heard women saying that their brothers went to medical college because there was a donation to be given and this meant that their parents could not afford to send them to medical college as well. So they settled for 'only science'.

Although dowry is legally prohibited, it continues to be practiced. The expenditure that would be incurred on a daughter.s wedding often becomes a factor in the calculations behind educational investments.

These are the initial problems. Then there are the hurdles that women face even after they have taken the plunge and decided to make careers as scientists. Male and female students sometimes find partners within their own cohorts. They do their doctoral studies together and often go abroad for post-doctoral work. During this phase, there is generally some equality between them in terms of sharing household chores and the like. Disturbingly, though, the idea of equality completely disappears once they return to India and settle down into domestic life.

There may be genuine constraints at this stage, of course. Usually the man is older, so he finishes his research studies first and starts looking for a job. His wife will invariably have to opt to live in the same city where he gets the job. By that time, the couple may decide to have a family. Once that happens, any hope the woman may have had of keeping up with her research priorities gets dissipated.

The respective career paths of the man and the woman are thus marked out. If the woman continues to work, despite phenomenal hurdles, with the help of family members or full-time domestic workers, she will still have to face the double burden of work and family. Women are also socialised to get more affected by domestic crises, even if they have supportive spouses. This, again, is about self-image and cultural imprinting that cannot easily be changed.

So what is the status of women scientists? As is evident, they are in a minority, they are possibly not as productive because of family responsibilities, and they often do not want to take on administrative positions like directorships. This is for basically two reasons. One, they think it entails too much responsibility, given their domestic commitments; two, existing social realities make it difficult even today for men to take orders from a woman. All these aspects contribute towards creating the major gender gap that presently exists at the highest administrative and policy-making levels of India's scientific establishments today. 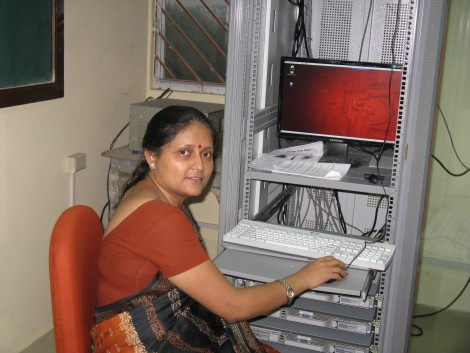 Computer scientist and winner of the prestigious Bhatnagar Prize, Sanghamitra Bandyopadhyay, has created a lab at home to be able to achieve her dream of pursuing a career in science. (Photo credit: Ajitha Menon\WFS)

Change is taking place, but slowly. Of late, science administrators have begun to take note of the smaller proportion of women scientists. While women may comprise about 50 per cent of students who do their PhDs in biology . their presence is of course much lower in mathematics and physics . at the post-PhD stage, when the time comes for them to join institutions, not more than 20-25 per cent emerge. In other words, about half the qualified women scientists are simply dropping out of the system. This is a loss not just in terms of gender representation but in the investment made in training them.

Keeping this in mind, in 2005 a task force for Women in Science under the Department of Science and Technology was set up on the Prime Minister.s directive. I was a member of that committee and we came up with several recommendations. We suggested ways to foster and encourage women scientists . including a time-bound recruitment target system to increase the proportion of women recruited to institutions all over the country. We also suggested measures that could attract schoolgirls to join the science stream, including holding camps and conducting role model counseling through interactions with successful women scientists.

Unfortunately, we were only an advisory body and had no powers of implementation. But the questions we raised were extremely important. The government must be pressured into addressing the structural barriers that come in the way of women science professionals achieving their full potential, thus ensuring that the space called the science laboratory is rendered more gender equal. (Women's Feature Service)