The iron is hot

Loha Garam Hai is a no-nonsense, no-holds-barred comment on lop-sided strategies of development. It is focused more on information and education than on the aesthetics of cinema, writes Shoma Chatterji.
09 September 2009 -

Loha Garam Hai tells the story of how people struggle with India's most polluting industry - the sponge iron industry. The 43-minute film presents a picture of an industry allowed to grow unfettered and unhindered by various laws, often with administrative connivance. Through graphics, title cards, data and interviews with people - both ordinary men and women, and rebel leaders - of Sundargarh, Rajgangpur, Siltara, etc., the film makes a scathing comment on the lop-sided concept of industrialisation gained at the cost of human lives, environment, agriculture and livestock.

The film opens with live footage of a protest against a sponge iron plant; a local woman is seen raising her voice. Slogans like "We will fight, we will win" "we want food, not iron", "close down the Siddhi Vinayak Company," fill the air. From these protests, the film moves back to trace the history and data on the industry's growth in India. The voice-overs begin with a male voice, alternating with a woman's as the film progresses. Among the protestors too, one finds women are aware, vocal and angry.

A profitable, but hazardous industry

In other parts of the world, sponge iron is produced in gas-based plants. So these plants are smokeless and less polluting. In India, 80 per cent of the sponge iron factories are coal-based, which emit heavy smoke and dust and are notorious for polluting the environment, posing a constant threat to the fertility of the soil, to animals, cattle and livestock and to people's physical health and well-being. A 100-tonne plant needs 160 tonnes of iron-ore, 125 tonnes of coal, 3.5 tonnes of dolomite and 150 tonnes of water everyday. This means that an input of 350 tonnes of raw material will produce 100 tonnes of sponge iron, while generating 250 tons of waste material daily.

The industry is also highly profitable; much of the cost of setting up a 100-tonne plant can be recovered within 18 months, after which the profits remain strong. This quick rate of return holds the biggest attraction for entrepreneurs rushing in to put in their money into the industry, which is growing by leaps and bounds every year. In 1985, India had only three sponge iron factories. By 2001, the number had shot up to 23, in 2005 it grew to 106 while another 225 are under construction. Most of the sponge iron factories, tells the film, are located in Orissa, Jharkhand, Chhatisgarh and West Bengal. Some sponge iron factories are found in Goa, Maharashtra and Karnataka. 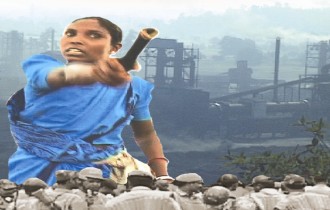 The sponge iron industry is highly profitable; much of the cost of setting up a 100-tonne plant can be recovered within 18 months, after which the profits remain strong.

Besides poisonous smoke emissions, there is the unhygienic and unscientific manner in which solid waste from these factories is deposited. The film tells us that while dust, coal and other wastes are dumped along the sides of the roads, in farming fields and along river banks, in some places, the waste is dumped directly into the rivers, posing a threat to marine life and to water. So far as smoke emissions go, the pollutants are filled with carbon dioxide, nitrogen dioxide and minute particles of heavy metals like cadmium, lead, zinc, mercury, manganese, nickel, chromium and arsenic.

Many sponge iron factories are in areas known for rice cultivation. But due to improper methods of waste disposal, all fields within a five km radius of a factory site are adversely affected because of air and water pollution. A study by the Agricultural University of Raipur is quoted in the film spelling out that about 25,000 hectares of land in the vicinity of Siltara near Raipur has turned barren because of the sponge iron industry. People are forced to consume polluted food grains leading to diseases. The cattle population has come down and milk production had reduced because the cows live off leaves and grass covered with layers of poisonous black dust from the smoke of the factories.

The health hazards are silicosis, cancer, particles of lead and mercury that affect the brains of growing children, wound the kidneys and damage the digestive system. Particles of heavy metals cause skin burning and skin diseases. Sulphur dioxide and nitrogen oxide cause cough, bronchitis, asthma, eye inflammation and throat irritation. The Pollution Control Board is so corrupt that the locals have named it Pay and Pollute Board.

One of the local men interviewed refers to the London Smog Disaster of 1952 considered one of the ten major environmental disasters in the world. The tragedy took a toll of 4000 people who died within the first five days of the incident, and another 8000 over the following three months, taking the total toll to 12,000 lives lost for no fault of theirs. The people of Rajgangpur, Orissa, are afraid that something similar might happen here because there is the same kind of smog in winter in Raipur.

The law is quite clear that it is mandatory for sponge iron factories to maintain a minimum distance of five kilometres between two factories, but the real story is very different. In Siltara, that is 10 kms away from Raipur, there are more than 30 factories. More than five factories are installed within a distance of one kilometre of each other. Another legal statute spells out that the distance between a village and a sponge iron factory must be at least one km. But in places like Sundargarh and Raipur, factories have come up adjacent to residential areas.

A significant act, the Panchayat Extension in Rural Area Act (PESA) was passed in 1996 in the interest of the tribal communities, according to which the consent of the Gram Sabhas is essential prior to installation of any industry in the Scheduled Areas. However, this act is openly violated.

The pace of the film picks up as it shows the people's protest gaining momentum after the brutal killing of 12 people in Kaliganganagar in January 2006, "a consequence and an example of the government's terror tactics on local people as its means to force its agenda of lop-sided development." This is the attack that began the movement of strong protests from the people. The movement began in September 2005. In March 2006, ex-MLA Geroge Torkey along with 127 women were imprisoned. Nine were held back even when the rest were bailed out. The film however, does not precisely spell out why these women and the ex-MLA were arrested. This leaves the viewer confused.

Towards the end of the film, Dr.Ramdayal Munda, a scholar, says, "This is like Abhimanyu's Chakravyuha, from where there is no exit." Bandhana Bedei, a protesting local, calls these "blood factories taking away the land of us adivasis." A woman in the film says, "There is a saying that goes - strike while the iron is hot. The heat of the people's anger in Chauranga village struck down the powers-that-be and cooled down the chimneys of the iron factory in the district of Raipur."

Loha Garam Hai ends on a positive note. It shows how in some other places, movements have met with some success. In October 2006, the Goa Pollution Control Board conceded to the people's demand and the Goa High Court issued a stay order in favour of the closure of major sponge iron factories in the state. The Goa Government ensured that no new sponge iron factory would be set up in Goa. In Palakkad District, Kerala, the Malampuza Sponge Iron Company already poised to get into production, was denied licence by the local panchayat to begin production and the government of Kerala backed the decision of the panchayat.

Loha Garam Hai is a no-nonsense, no-holds-barred comment on lop-sided strategies of development. It is focused more on information and education than on the aesthetics of cinema or the beauty of form and content. It is more of an awareness-raising film on environment and violation of human rights through unplanned industrialisation, than a film targeted at awards or film festivals. It is not a beautiful film in any sense, but through a volume of needed information and education, it enlightens instead of entertaining. The award therefore, is a reminder that we need more films like Loha Garam Hai.

TIGER SANCTUARY : Are tigers back at the Buxa reserve?
MORE ARTICLES
on similar topics ...
ENVIRONMENTAL HAZARDS