“We don’t need toilets, give us electricity and water”

Total Sanitation Campaign, MGNREGS and other government schemes are unheard of among villagers at Dinesh Nagar, Assam who live with a perennial lack of food, pure water, and health amenities. Nilotpal Bhattacharjee wonders if they will ever find deliverance from despair.

Maheshwari Sabor, 30, lost her husband around three years back and now lives with her daughter Sunamati Sabor, 4, in the village of Dinesh Nagar in Cachar district of Assam. Going to bed hungry at night is something that both mother and daughter are very familiar with.

However, some nights Sunamati cries sorely from hunger pangs. Her mother Maheshwari tries to quell the ache with water and also pretends to prepare food so that her daughter stops screaming, in the hope that food is being cooked. After some time, when Sunamati gets tired of crying, she goes to sleep and later her mother also joins her in the bed.

Maheshwari Sabor is a daily wage labourer. Due to various reasons, she does not get work every day. The situation becomes worse during the rainy season. Getting work on a rainy day, literally and metaphorically, is very difficult. If she does not find work for a few days at a stretch, the mother-daughter duo have to spend the night without food.

“She is still a child and sometimes cries for food. But, at that moment I am helpless as I have nothing to offer her. It is very painful for a mother when her daughter sleeps hungry. But nothing is in my hand,” says Maheshwari in a trembling voice.

Hers is not an isolated case. Every family of Dinesh Nagar has a similar story to tell. The curse of poverty has gripped around 90 families living in Dinesh Nagar, named after the former Assam minister Dinesh Prasad Goala. No government aid reaches this village under Lakhipur LA constituency, which is ironically only around 35 km from Silchar town, the second biggest town in Assam after Guwahati. 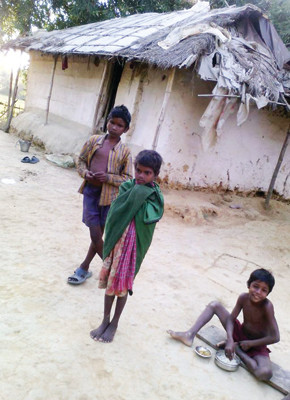 Children in front of a dilapidated hut in Dinesh Nagar. Pic: Nilotpal Bhattacharjee

If the going proves to be a daunting task during the day for the villagers, the struggle for existence gets more difficult after dusk, when the village plunges into darkness.  “We wind up our work by evening. We are not always given the monthly ration of two litres of kerosene by the ration shop,” says Manilal Sabor, an inhabitant of the village.

With no money to buy kerosene in the market, life is a challenge for the villagers after sunset fraught with dangers such as attacks by insects and snakes. Not just electricity, but other basic facilities like pure drinking water, health facilities, road and sanitation are also missing in the village.

During the dry season, the village suffers from acute water shortage. The villagers are dependent on a few wells which get dry in the winter season and they are forced to drink contaminated water from nearby water-bodies. There is a lack of sanitation in the village. Most of the families do not have toilets. They prefer to go outside to respond to nature’s call.

“We don’t have adequate food to eat. Building latrines or sanitation infrastructure is something we can hardly afford to think of. We defecate out in the open and we find no problem in it,” says Deben Sagor, a 28 year boy.

Hardly any of the villagers of Dinesh Nagar have heard of the Total Sanitation Campaign launched by the government. “This is for the first time we have heard about it. We don’t want latrines; instead if we have electricity, health and pure drinking water, our lives will be much easier and we will be completely satisfied,” says Deben Sagor.

This is a telling reflection on the ground realities of the government’s much-hyped Total Sanitation Campaign in Cachar. The Chief Minister of Assam, Tarun Gogoi had launched the Global Sanitation Fund (GSF) programme in 2011 with the aim of raising the levels of sanitation-related awareness among the close-to-eight-million people in the state. But, many villages like Dinesh Nagar in Assam do not have any latrine.

Health facilities in the village are also lacking. Although a public health centre is located a few kilometres from the village, it remains closed throughout the year. “The health centre was established four years back. But, we find it closed every time we visit it. We hardly see any staff or doctor at the centre,” alleges Sima Sabor, a 25-year-old villager.

The village does not have a proper road. If anyone falls ill, the people have to take the patient in a stretcher as not even a motorcycle, let alone a bigger vehicle, can enter the area. There have been instances when patients have died on the way to the hospital.

The lack of food and hygienic environment has led to a very high incidence of malnutrition among the children of the area. At a time when the government has been releasing crores of funds to ensure education for children, the appalling truth is that hardly any child of the village of Dinesh Nagar has ever attended school.

“We have to struggle every day to earn a square meal a day. Under such circumstances, we can’t think of sending our children to school. Once they have attained a particular age, we take them with us for some work,” says Radhika Sagor.

The situation is more or less the same at Tabalpur, a neighbouring village of Dinesh Nagar. Rajan Das, an inhabitant of Tabalpur, says that they may be a bit better off than the villagers of Dinesh Nagar, but are also sorely in need of improved basic amenities.

The realities of Maheshwari’s or Sima’s existence leave a question echoing in the air: of what use are government schemes and budgetary allocations when they do not touch the lives of people who need them the most?

The author is a journalist based in Assam.