The memory of a memorial

The tsunami is not forgotten, but in Keechankuppam the fishermen have weighed the risk of another tsunami against the prospects for finding safer housing further inland. And so their huts are back again on the once-ravaged beach, as though the tsunami never happened, writes Dilip D'Souza.
26 September 2006 -

One year ago, I was on this stretch of beach. There were no houses here. There was much construction and reconstruction behind me, sure, but there were no houses here on the beach. Instead, there was a plantation of a few hundred young palm trees, sprouting fresh green from the white sand. Each was accompanied by a neat rectangular sign, carrying usually one English letter and a Tamil word. Like, "A. Manisha", or "M. Sushmitha", or "S. Ajay". Rows of young trees and rectangular labels, stretching into the distance along the beach with the now-quiet waves rolling in.

It was, you may have guessed, a tsunami memorial. A prominent metal sign announced, in Tamil, that it was the "Tsunami Cyclone Stopping Forest Garden". In Keechankuppam, across a narrow bridge from Nagapattinam, the tsunami wiped out hundreds of lives and homes. Many were on this beach, not 50 yards from the shoreline. The wave that Sunday morning thundered several hundred metres inland, strewing dead bodies and debris all over the area. The homes on the beach here were utterly unable to resist its furious brunt. When I first came here, just days after the tsunami had roared ashore, nearly everything around me that once stood had been flattened, and people were burning dead bodies everywhere. Boats large and small had been flung against the bridge in an impossible jumble; several had been flung clear over several buildings to land in the midst of parked trucks well inland.

When I first came here, just days after the tsunami, nearly everything around me that once stood had been flattened.

When I returned six months after the tsunami, reconstruction was well under way. The sheer scale of destruction meant that the village still looked like - well, like a tsunami had hit it. But there was hammering and building going on everywhere. Houses were being rebuilt - though not, of course, on the beach like before the wave. Work had begun on a new fish processing plant; work had also resumed on a soaring flyover to replace the narrow bridge. I could not imagine how anyone could clear that mess of flung boats, but cleared it had been.

Three more months later, more of the same, and at a possibly greater speed. Houses, boats, workshop, flyover. Keechankuppam was coming back fast.

And on both those return visits, I spent some time wandering among those young palm trees on the beach, labelled for Pradeep and Sneha and the other local victims of a killer wave. A sad spot, and how much sadder it must have been for these families. Yet it was also inspiring. Something about the pristine white sand, the vivid green of the palm leaves, the gentle breeze, the sense of memory and renewal. Perhaps even the thought that this grove might be a bulwark against the next wave - yes, the Tsunami Cyclone Stopping Garden, of course. Perhaps it might stimulate the planting of similar groves elsewhere on this ravaged coast. (Stimulated or not, that did happen). It was for this inspiration that I made those return trips, that I came back from them with a measure of hope.

One more year later, I make a third return visit to Keechankuppam. But now there is no grove. No palm trees. No neat labels. No sign in Tamil. No memorial. It's as if it never was here. In fact, several people I asked looked puzzled. They could not even remember there being such a memorial. So blank were they that I actually began questioning my own memory. Did I imagine those rows of trees? No: I have my notes from last year that mention them, with the name of the memorial and several of the victims' names transcribed. Yet one year on, the palm tree memorial, for whatever reason, is simply not here.

And with it not being here, the beach no longer seems such a pristine white. There's debris all around, bits of fish here and there, including long sliced-off tails of manta rays. Close to the water, several men squat to use the shore as a bathroom. To my right are the remnants of palm-frond mats used to dry fish; a short distance away there's a fresh catch drying, the fishermen sitting nearby mending their nets. Behind me stretches the brand new wall of the completed processing plant. I stand in despairing wonder, unable to believe that all those trees are simply gone. 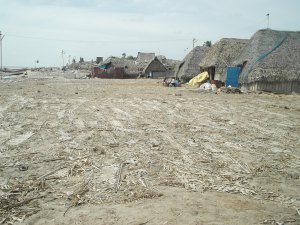 And while I stand like that, I suddenly realize what I'm really looking at, what the meaning is of those palm-frond mats and the huddle of fishermen. Just behind them are rows upon rows of new thatch-roofed fishermen's huts, stretching into the hazy distance. I had noticed them in passing as I walked onto the beach, but had not given them a second thought. For they were so much the usual sight you might expect in a place like this. Fishing village on the beach, why not? Just the usual. Except that this is precisely what the tsunami steamrollered that Sunday morning -- huts just like these, right on the shore where these are now. On my previous visits, the area was still bare, wiped clean of huts. On this one, there are huts here as if the tsunami itself never happened. Huts that have come up in the last year. Clearly their occupants have weighed the risk of a swift tsunami death against prospects of finding safer housing somewhere further inland, and the risk won.

Maybe it's because I saw this area when it was devastated, maybe it's because I last saw this area when they remembered their dead with palm saplings. Whatever it is, I'm standing here stunned, staring at these huts in dismay for minutes on end, so much so that the fishermen turn to look, then snicker at me. What would drive these people to set up house again, right here on this once-ravaged beach? Nothing, I would have thought. But then I don't have to live here. So here are these houses.

Time dulls memory, of course. When you think of it like that, a memorial that once was fits right in.

BACK TO SCHOOL : Meaningful restart of education is critical
MORE ARTICLES
on similar topics ...
DILIP D'SOUZA