The NREGS is restricted to a 100 days a year. The PDS is targeted to exclude 'APL' families. Only exploitation is universal, writes P Sainath.
16 August 2010 -

The rotting of lakhs of tonnes of foodgrain in open yards, while shocking, is hardly new or surprising. Remember the rural poor marching on godowns in Andhra Pradesh in 2001 in similar circumstances? The Supreme Court was quite right in jolting the Union government. "In a country where admittedly people are starving, it is a crime to waste even a single grain," said the annoyed Court. And suggested that the grain be released to those who deserve it.

Strong and welcome words. However, the Court could take matters much further if it sees why the Government of India would rather have that grain rot than let the hungry eat it. The failure to understand that leads us to pit poor against poor. To see people in the APL category as the enemies of those who are BPL. Hence the suggestion that we take away grain from one to give it to the other. APL was itself a fiction created by the government to 'reduce' the number of poor it was obliged to help. So the GoI would act selectively on this part of the Court's advice with glee. This would exclude those in APL from even the pathetic little aid they get.

It will ignore the more important order of the Court to distribute the grain before it rots. It might pull up Food Corporation of India officers unable to look after the grain but who did not cause it to pile up in the first place. When you have twice the grain you are equipped to stock, you have a problem. The GoI could distribute that grain. Or release it at low prices through the public distribution system. It would hate either option. That would run against the grain of its ideology and economics. Letting the hungry eat it would, for the government, increase the 'subsidy burden'. Why would the government do that after successfully slashing Rs. 450 crore from food subsidy in the current budget?

The nation has spawned 49 dollar billionaires and about a 100,000 dollar millionaires in a decade. But it has no money to feed its hungry. So says a government that tosses Rs.500,000 crore of tax exemptions to the wealthy in the current budget under just three heads.

This hasn't stopped governments from claiming 'record production' every other year. Remember the 'record surpluses' in 2001-03? Those years we exported millions of tonnes of grain at prices lower than those offered to our own deprived. That grain fed European cattle - the most food-secure creatures on earth. While hundreds of millions went hungry at home. Today's rotting grain, too, will at some point be flogged off to private traders at throwaway rates.

These last two decades also saw the collapse of public investment in agriculture. To starve farming of funds and say we haven't enough grain is a travesty. Actually, commit yourself to universalisation, revive food crop, give the farmer a good price and boost the dismal levels of procurement that now exist. You'd be surprised how fast you can meet that challenge of production. 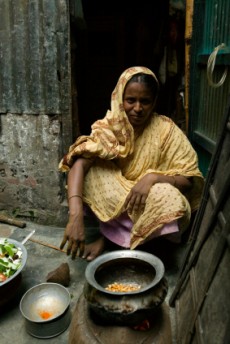 The nation has spawned 49 dollar billionaires and about a 100,000 dollar millionaires in a decade. But it has no money to feed its hungry.

•  Of APL, BPL and IPL
•  Food for all? Not through NFSA
•  How to feed your billionaires

Instead, we seem to be heading, courtesy the National Advisory Council (NAC), for a 'universal' system in 150 districts. 'Universal' here could mean rice or wheat at Rs.3 a kg to a limit of 35 kg per household. This 'universal' stops at rice and wheat, will not include pulses, oils and millets, does not see the size of a household and is limited to a fourth of the country. You can't, goes the saying, be a little bit pregnant. You can't be a little bit universal either. The debate between 'targeting' - which is what the 150-districts notion is - and a universal PDS is not one over different routes to the same goal. It is one over different goals. You are either universal, or you are not. This move invites chaos.

First, as an editorial (August 10) in The Hindu pointed out, this seems to equate hunger with geography. What of millions in other districts? Are they not hungry? And how, for instance, would this impact on millions of poor migrant labourers?

Take Orissa's Ganjam district which sends out four lakh migrant workers to Surat alone in Gujarat. Now Ganjam could well be in the 150 districts. How will its hungry migrants access that grain in Surat? Surely, Surat will not be in the list of 150? Can't you just see the store keeper in Surat telling the migrant: "Yes, son, I've seen the law, too. Here's your rice at Rs.3."

Meanwhile, even as these migrants fail to access their Rs.3 a kilo grain, Ganjam could well be dropped from the list of 150 at some point - citing 'poor demand'. Thane in Maharashtra with its famished adivasis, could well be a Rs.3-a-kilo district. Next door is Mumbai where rice goes at Rs.30 to Rs.40 a kilo. Result? Most of Thane's cheap rice will migrate to Mumbai.

Or take agricultural labourers in Orissa. An adult needs at least 750 grams of rice a day. So a family of five (including children) needs around 3 kg of rice a day. Let's say they cannot manage more than 2.75 kg a day. They would still consume 82.5 kilos a month. The new 'universal' would give them 35 kg of that for Rs.105. The remaining 47.5 kg, at Rs.22 a kilo or more, would cost them well over Rs.1000. Where will they get that from?

Why do lakhs migrate each year from Kalahandi or Bolangir seeking work outside when the NREGS exists in those districts? Why do so many prefer the lesser pay of brick kilns in Andhra Pradesh? One major reason is that the NREGS restricts them to 100 days per household. In the awful brick kilns of Andhra Pradesh, every member of a five-strong family (including children) can get work for up to 180-200 days. The NREGS is restricted. The PDS is targeted. Only exploitation is universal.

Yet the debate has been over things like whether each family should have 25 or 35 kg. This is an Oliver Twist approach to food security. "Please, sir, I want some more." Coming from within the NAC, that wrongly casts Montek Ahluwalia of the Planning Commission in the role of Bumble, or Pranab Mukherjee as Fagin. In truth, the two make Bumble and Fagin seem reckless philanthropists. But there's a bigger problem to what's going on. It happens with each sector. The sequence is the same.

The good guys create a demand for legislation. The government agrees. Next, the well-intentioned come up with a draft the government then dilutes. After which the Planning Commission declares the effort to still be unworkable. So it's thinned down again. Then the Finance Ministry says: "where's the money?" And it's watered down to an irrelevance. What remains is something that enshrines the right of the Indian people to cross the street (when the green signal that says 'walk' is on).

Obviously it fails badly in practice. Targeting always does. That's when Bumble, Fagin, The Artful Dodger and the rest of the Dickensian crew come up with what will be their solution to every such problem: smart cards, unique identification numbers, food stamps, vouchers and cash transfers. (And GM foods to meet production targets.) That's where it's headed - towards a worse disaster.

The food security legislation in the form that now seems likely weakens and dilutes the Directive Principles of State Policy of the Indian Constitution. Those are universal, not targeted. Sure, we have to move towards making them real. But we need at every stage to ask whether the steps we take strengthen or weaken the Directive Principles. These steps on food security weaken them. Also when we act in isolation in one sector like food, we undermine the vital others. What we could do with is a comprehensive universal programme that covers nutrition, work, health and education. At one time, for one nation.