The POTA families of Godhra

The doors of homes in Rehmat Nagar, Godhra, are opened by children, and sometimes by women. Men are rarely to be seen around. The world outside the settlement refers to them as "POTA families", a description that encapsulates their precarious present and future. Deepa A has more.
06 November 2007 -

The scrapyard that leads to Rehmat Nagar in Godhra, in Panchmahal district in Gujarat, appears to be an indicator of the squalor that one's about to witness. A dusty, unpaved path serves as the access road to this settlement, comprising of hovels with red-tiled roofs. A few children and women are to be found on the middle of the road, next to a water container, washing vessels or filling steel pots. The doors are opened by children, and sometimes by women, if they are home; men are rarely to be seen around. Most of the tiny shacks are bereft of furniture, the starkness of the rooms reflecting the silences and absences that today mark the lives of Rehmat Nagar's inhabitants. 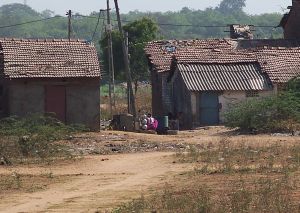 Rehmat Nagar in Godhra, one of the settlements from where many Muslim men have been arrested under POTA. Pic: Deepa A.

The world outside the settlement refers to them as "POTA families", a description that encapsulates their present and future, and one that has redefined their perhaps already precarious existence. On February 27, 2002, after 59 people were killed in a fire that engulfed the S-6 coach of the Sabarmati Express at Godhra station, the otherwise inconspicuous town catapulted into notoriety. Godhra became the reason for targeting the Muslim community in Gujarat - a Muslim mob is said to have burnt the coach carrying Hindu karsevaks and in the ensuing riots, over a 1,000 people, a majority of them Muslims, were killed.

In Godhra, the police arrested many Muslim men living in areas close to the railway station and charged them under the Prevention of Terrorism Act (POTA) for burning the train. The women at Rehmat Nagar, which is about four kilometres from the railway station, say the police turned up on the evening of the horrific Sabarmati Express tragedy, barged into the houses and picked up men - their husbands or their sons - at random. There are 14 "POTA families" here, women and children whose lives were upturned by the Act that was repealed by the Manmohan Singh-led United Progressive Alliance government in 2004, but under which their loved ones continue to be charged. The women, who once never stepped out of the confines of their homes, have started working and it's on their mettle that life moves on. They face ostracism both within and outside the community, as fear of harassment by state agencies prevents even those who want to help from stepping forward.

POTA, which came into force in 2002, was called "draconian" for many reasons, including the fact that it allowed the detention of suspects for up to 180 days without the filing of charges in court. In Gujarat, POTA is known to have been widely used to target the Muslim minority, says an Amnesty International report titled 'Five years on - the bitter and uphill struggle for justice in Gujarat', released in March 2007. It notes, "Human rights activists point to the dramatically different treatment of those accused in the burning of (sic) Godhra train compartment - the incident which is alleged to have sparked the communal violence against Muslims. These 87 persons [arrested under POTA] have remained in pre-trial detention for the last four years - despite several legal attempts by human rights organizations to secure bail. All of them are Muslim." The report points out that the accused continue to be held under the provisions of the Act even after a POTA review committee appointed by the Indian government recommended in 2005 that the charges against them - under POTA - be dropped.

Some would call the transformation of women, from shadows to the heads of households, empowering, and perhaps it is.

But such contemplations seem academic and indeed futile in the face of the poverty one sees at Rehmat Nagar, and the sheer helplessness and sadness one encounters in each house.

•  Prosecution system in need of reform
•  Case of the Parliament attack

J S Bandukwala, a Vadodara-based activist who faced mob frenzy during the riots, says the "POTA families" are suffering terribly. "Most of them have been ruined," says Bandukwala, a campaigner against communalism and a retired faculty member of the M S University in Vadodara. "The education of their children has suffered - education itself has become a luxury." When he visited the families in Rehmat Nagar earlier this year, he found that the whole place was "just one big garbage dump, it was stinking". Even the little, if any, monetary help that comes the way of families is adequate only for meeting food expenses, that too for a while.

In Nafisa Anwar Ansari's one-room house in Rehmat Nagar, the sooty bricks stacked to one side to create a small kiln, point to aspirations to rise above the wretchedness of the dark tenement. The kiln was used for baking biscuits, something her family had been doing for just over a year when her two sons were arrested under POTA. Nafisa Ansari is over 60 and blind, and she weeps as she speaks of the ordeal suffered by her two sons, one a 40-year-old and the other 25. The elder son has four children while the younger one was newly married at that time. The grandchildren, she says, aren't going to school. "They do some painting work, which comes up once every two weeks or so," she adds. The children haven't seen their father, Shabir Ansari, since he was arrested in 2002.

As Bandukwala points out, those arrested under POTA have been in the Sabarmati jail in Ahmedabad for well over five years. Their bail applications are currently pending in the Supreme Court, but meanwhile, their families find themselves unable to even bear the expenses of commuting to Ahmedabad once in a while.

Rehana Badam's husband, 28-year-old Shabir Badam, was picked up six months after the Sabarmati Express tragedy. She manages to go to Ahmedabad once in three months. "It costs me about Rs.400, how can I spend that much money often?" says the 24-year-old mother of two. To make ends meet, she washes clothes in households in Bhoiwada, which is about two kilometres from Rehmat Nagar, earning Rs.500-600 per month. She also works at a nearby pickle factory whenever it's operational - usually a few months of the year - making about Rs.40 daily. Her two children go to a government-run Gujarati-medium school but she has to deny them an opportunity to meet their father as it's too expensive for all of them to travel to Ahmedabad.

Twenty-eight-year-old Usmabanu Yasin Malik, who has three children, has seen her husband five times in five years. She narrates a familiar story of juggling jobs to make a living after her husband's arrest. He used to sell samosas at a small shop, and was picked up by the police on February 27 (at 5.30 pm, she remembers). Usmabanu Malik, who had never worked before, now cleans utensils and floors in various houses and also does odd jobs at the scrapyard, making about Rs.600 every month.

Panchmahal-based activist Mukhtar Mohammad, who himself has been targeted by state agencies several times, says the families have been driven to desperation not only because of their financial problems but also the exclusion they face. "There's no money for food, or for the education of the children," he says. "And if anyone tries to help the families, the police harasses them, saying 'you are helping the accused'." This sentiment is echoed by 30-year-old Saeed Umerji, whose father Maulana Umerji, a known community leader in Godhra, was arrested under POTA. "We were doing relief work here for over a year after the riots when my father was arrested," says the bitter son, who has followed the POTA cases so religiously that he has on his fingertips all the dates and judgements delivered in the matter, be it in the sessions court, the special POTA court, the Gujarat High Court or the Supreme Court. 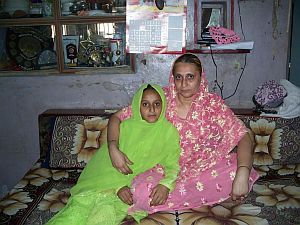 Latifa Giteli, an activist based in Godhra, with a child at her home. Pic: Deepa A.

Afsana Banu doesn't keep track of the circuitous route the cases have taken. Instead, she has been struggling with responsibilities that came at an unexpected time in her life, after her husband Feroz Khan Gulab Khan, who used to work at a hotel, was arrested under POTA. "None of us used to work earlier but we have all been forced to now," says the 30-year-old, who washes clothes at some houses. Tracing their routine, she explains that the women make food at night and give it to the children in the morning; in the afternoon, they usually get something to eat at the houses where they work, which they unfailingly bring home to share with their children. Afsana Banu has three children, who all go to a government-run school now, but she does not know for how long. She feels that it will be difficult to bear the expenses for their studies. "I can't pay the fees for all of them," she says.

Some would call the transformation of women, from shadows to the heads of households, empowering, and perhaps it is. But such contemplations seem academic and indeed futile in the face of the poverty one sees at Rehmat Nagar, and the sheer helplessness and sadness one encounters in each house. Social activist Latifa Giteli, who started a school in Godhra with a few others after the riots, is possibly one of the few who understand the predicament of these women. Giteli became involved in social work during the 2002 riots, when she saw the horrific situation of the victims - particularly the women - at relief camps.

Driven by a desire to help, and with the support of a non-government organisation called Anandi, Giteli picked up legal knowledge and trained to be a social worker. She has helped the "POTA families" but a repressive state arrested her husband in 2004, presumably for her involvement with those otherwise ignored. "My husband is a government servant [he works for VSNL] and he was detained for 11 months under false charges. Anyone who helps POTA families is harassed - look at my own case," she says. Though her husband was eventually released, Giteli recounts the harrowing time she had when he was behind bars. "No lawyer wanted to take up the case, they said they would be harassed too if they defended him. People were so afraid after his arrest that my own relatives were scared of meeting me," she says.

Giteli says her training to be an activist helped her when her husband was arrested. This spirited woman certainly found her calling after the brutalities of the 2002 violence. But in the gloomy expanse of Rehmat Nagar, the lone earning members of the "POTA families" are a long way away from finding similar solace or even a reprieve.

Deepa A is a New Delhi-based journalist. The report is part of series from a study on communal violence and education funded by the Sanskriti-Prabha Dutt Fellowship in Journalism, 2006.

BACK TO SCHOOL : Meaningful restart of education is critical
MORE ARTICLES
on similar topics ...
GUJARAT