In Pune, bureaucratic meddling and lack of vision are threatening a simple, cost-effective eco-technology which treats heavily polluted water and turns messed-up water bodies into clean ones, reports Surekha Sule.
31 May 2010 -

Take a tour through any city in the country, your eyes will unmistakably catch the ugly sights of filthy nallahs (natural streams converted into drains or polluted streams) and storm water drains that ultimately discharge pollutants into rivers running or near these cities. Burgeoning human settlements in cities have brought with them the menace of ever-increasing solid waste and sewage problems. There is no respite for cities water bodies from getting highly polluted.

According the Central Pollution Control Board, about three-fourth of untreated sewage from 233 Indian Class I cities reaches rivers and lakes; while Class II cities do not have sewerage system and hence sewage is dumped into the natural drains. In Class I cities too, the sewers and manholes are often silted and hence punctured to allow it to flow out into the natural drains. The sewage flowing through the nallahs and drains is often channeled to STPs but en route, solid waste dumped by the people causes clogging. In other words, the conventional system of urban sewage treatment has failed miserably.

A flicker of hope

In this grim scenario, a flicker of hope may be spotted in a quiet effort being put in by environment technologist-couple Dr Sandip and Sayli Joshi through their simple, low-cost technology for ecological restoration of highly polluted water bodies like nallahs, streams, tanks, rivulets, etc. Through their organisation Shrishti Eco-Research Institute (SERI), the Joshis, along with some NGOs and industries, have demonstrated that SERIs patented eco-technology -- Green Bridge -- brings about a visible difference to many water bodies. 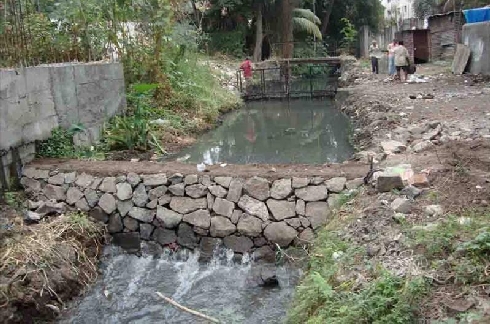 This is how Anandnagar nallah in Pune flows following three Green Bridges installed by SERI. Now you can see clear water and the stream bed too. People are happy that there are no mosquitoes or bad smell. Pic: Surekha Sule.

When applied, the effects of this method turned out stupendous in a nallah running through College of Military Engineering (CME), one each near Sandvik Asia, in Ambil and Anandnagar -- all located in Pune. Recently, significant change was also witnessed in a stretch of the Ahar river in Udaipur too.

To best understand this eco-technology and its impact, visit Anandnagar nallah in Pune. This natural stream flows down from the Panchgaon Parvati range of Sahyadri in southwest Pune and drains into the Mutha river after Khadakwasla dam. Two decades ago, this was a clean-water natural stream but urbanisation on the outskirts of Pune swallowed it up and converted it into a nallah where all kinds of filth, solid waste, and sewage flowed in. The nallah used to get choked further due to encroachments as some buildings came up right on its course and societies broke clogged septic tank chambers and the fecal matter further contaminated the flow. Obviously, mosquito menace and foul odour besides ugly sight was the order of the day. Ironically, the citizens who dumped the waste irresponsibly blamed the municipal corporation for their woes.

Simulation of a natural stream

Two years ago, an Anandnagar resident and environment activist Ajay Vaishyampayan approached SERI for cleaning up this nallah. Convinced of the efficacy of Green Bridge technology, Vaishymapayan involved the Pune Municipal Corporation which removed tonnes of solid waste from this nallah.

Thereafter, SERI put three Green Bridges on the nallah stretch from top to bottom. For each Green Bridge, a screen of wire mesh was placed across the stream to arrest solid waste like plastic which was removed periodically. The water with suspended impurities then flowed through the Green Bridge which is actually a sieve or a porous wall made of fibrous material like coconut coir strengthened at the bottom with stones, sand, and gravel. All the floatable and suspended solids got trapped in this biological wall and the turbidity of the flowing water was reduced considerably. The green plants growing there helped in the absorption of soluble substances like heavy metals. Further, a mixed bacterial culture was used to degrade dead organic matter. The multiplying bacteria were eaten up by micro-vertebrates present in the natural system, thus establishing a natural food chain. 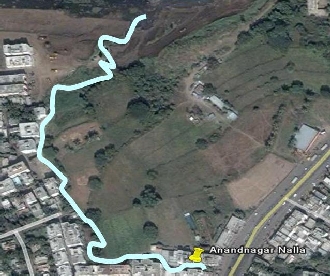 A satellite image highlighting Anandnagar stream. This natural stream flows down from the Panchgaon Parvati range of Sahyadri in southwest Pune and drains into the Mutha river after Khadakwasla dam. Graphic: Surekha Sule.

This is an ecosystem approach and application of such ecosystem principles to treat polluted water is eco-technology, says Sandip Joshi.

Another Green Bridge near Sandvik factory in Pune proved its worth as the levels of dissolved oxygen increased multifold. Communities which resisted this project initially came around to volunteer as they realised and began to enjoy the benefits of clean environment. Even a picnic spot came up near this stream.

In a conventional mechanised system, bacterial monoculture is used which eats up dead organic matter. But this leaves a residue -- sludge -- behind and there is no organism to eat that up. Disposal of sludge is a big problem through conventional STPs. In eco-technology, the biokinetics get active and nothing is left behind. In short, it is a simulated system of a stream in a forest where mother nature takes care of the pollutants.

The results are marvelous at Anandnagar nallah. Now you can see clear water and the stream bed too. People are happy that there are no mosquitoes or bad smell.

Eco-technology means zero risk of hazards, zero residue, and zero energy. But in conventional STPs, there is a possibility of machinery failure, accidents, and explosions thus risking a huge capital. Since STPs need to eventually dispose of the hazardous residue, they end up consuming a lot of energy.

Hydrasch Succession Pond - It is an open water -pond system confined by rooting plants and the surface is covered with floating plants. Its useful for community wastewater or as a polishing treatment in the main STP.

Green Bridge - This technology uses filtration power of biologically originated cellulosic/fibrous material with the growth of green plants. A simple but very good filter is developed from fibrous material like coconut coir to form a bridge/porous wall-like structure strengthened by stones and sand. Its useful for nallas, odhas, and rivers.

Green Lake - This system uses floating, submerged or emergent aquatic plant species. Macrophytes are capable of absorbing inorganic nutrients such as P and heavy metals such as Cd, Cu, Hg, Zn, etc. They can even promote the growth of microbes to degrade organic matter and toxicants. Its useful for industrial and domestic wastewater treatment.

SERI has applied Green Bridge technology at three spots in Pune over the last decade or so. College of Military Engineering in Pune successfully adopted the system to clean up a nallah passing through its vicinity. Unfortunately, CME later decided to construct a rowing channel crossing the Green Bridge installation. As a result, the latter had to be dismantled. It is learnt that the rowing channel too lies abandoned for want of sufficient water.

The 10-km-long Ambil nallah flows from Katraj and merges with the Mutha river at Dattawadi in Pune. A Green Bridge was installed at its last one-km stretch with contributions from some 12 organisations including River Action Group, Clean River, SERI, Gomukh, Intach, etc. The Corporation removed two tonnes of garbage from this nallah as this stretch passes through a congested residential area and receives a lot of solid waste dumped by inhabitants. SERI installed two screens-one bridge and one screen-two bridges system here because of the high quantity of solid wastes.

Between 2005 and 2008, the Ambil Odha (nallah) stretch gave excellent results with rise in dissolved oxygen. However, typical of bureaucratic non-coordination, the health department helped the project but the sewerage department decided to channel the Ambil nallah sewage into STP and concretised it, thus dismantling the Green Bridge systems.

If only two of the four SERI experiments are working in Pune, blame it on the mean-minded politics and meddling bureaucrats. Sensing Vaishyampayans popularity, it is reported that a local politician in one of the project areas is driving a wedge between the promoters of this eco-technology and the bureaucrats concerned thereby damaging the co-ordination absolutely essential to carry out this project. India Together has not independently confirmed this.

If eco-technology is so superior to the conventional centralized STPs, then why is it not being scaled up?

According to the Joshis, Punes water treatment plant plan was presented to the citys municipal corporation and was also hailed by the authority. But the process of going for each micro-level project needed a tender process as per the norms. On a few occasions, SERIs entire project was hijacked by a company by bidding at lower quotes. Besides, tender demands a standardized approach which is not possible as different ecosystems need different solutions. The Green Bridges cannot be of a standard size as it keeps varying depending on the quantities of the waste load received.

Sayali Joshi says, We requested the authority to deviate from the tender business to call it a research project.

It does not mean people can continue to dump the garbage freely, let the sewage run into natural water bodies, and expect someone to clean up the water bodies.

Moreover, eco-technology needs peoples participation; it also calls for considerable time and efforts to create awareness about irresponsible dumping and its ill-effects. It does not mean people can continue to dump the garbage freely, let the sewage run into natural water bodies, and expect someone to clean up the water bodies, regrets Sayali.

In Pune, 150 MLD of untreated waste water gets discharged into the Mutha polluting its water. The effects are all too evident. The riverbed is teeming with weeds and water hyacinth; foul odour and toxic gases are common. Besides, the Mutha reaches the Bhima river system and the people downstream end up drinking Punes sewage.

SERI has suggested the Pune Water Pollution Control that sewage treatment plants be set up at individual houses, colonies, apartments, and slums at an estimated cost of at Rs 10,000 for 1,000 litres/day flow combined with the citys 150 nallahs treatment at a cost of Rs 8 lakh for 10 lakh litres/day.

Unfortunately, extraneous reasons are stifling SERIs eco-friendly efforts to clean up such a mess. No wonder it often takes a disaster for the officialdom to size up its act in India.

Surekha Sule is a freelance journalist and environmentalist based in Mumbai, and a Media Fellow of the Ministry of Water Resources of the Government of India.