Now that the Nehru-Gandhis once more control both party and government, P V Narasimha Rao can be mentioned in Congress circles only if it is possible to disparage him, writes Ramachandra Guha.
04 April 2010 -

The first meeting of the Indian National Congress took place in Bombay in the last week of December, 1885. Late last year, the Congress held a function in New Delhi to mark the beginning of the year in which the party was to celebrate its 125th anniversary. At this meeting, the Congress president observed, according to a magazine report, that "Rajivji did not stay with us to see his dreams being realised, but we can see reflections of his thoughts in the party manifesto for the 1991 elections. That became the basis for economic policies for the next five years. These policies gave a new direction and strength to our economy and our society".

I do not have a copy of the Congress election manifesto for 1991 at hand. It may perhaps have mentioned the need to liberalise the economy. In his first term in office, Rajiv Gandhi had removed government controls from key areas, such as computers. But he was at that time a cautious and hesitant liberaliser. The real dismantling of the licence-permit-quota raj took place under the leadership of P V Narasimha Rao, prime minister of India between 1991 and 1996.

Sonia Gandhi's assertion at that anniversary function was a clear attempt to deny Narasimha Rao the credit for freeing the economy from the shackles of State control. Sitting next to her on the dais was our current prime minister, who, of course, served as finance minister in Rao's government. One does not know what he was thinking when his party president ascribed the reforms to her late husband. For the fact is that had Rajiv Gandhi not been assassinated, and had he come to serve a second term as prime minister, someone other than Manmohan Singh would have been assigned the finance portfolio. Singh was hand-picked by Rao, who then gave him the freedom to implement the policies of economic liberalization with which he has since been associated. Had it not been for Rao, then Singh may now have merely been a Professor Emeritus of the Delhi School of Economics (which had offered him a position weeks before he joined the government in the summer of 1991).

Narasimha Rao may be denied the credit by the present Congress leadership for taking the Indian economy well above the 'Hindu rate of growth' of two to three per cent per annum. But they do not let the public forget his greatest defeat, which was his failure to stop the demolition of the Babri Masjid in December, 1992. Rahul Gandhi once remarked that had his father been alive, he would have placed his body between the kar sevaks and the building they brought down. The implication was that if Narasimha Rao wanted he could have done likewise. 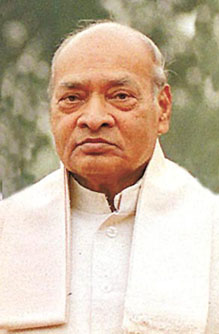 When he unexpectedly became prime minister, Rao sought to break out of the shadows of the dynasty and become his own man. His speeches rarely invoked Indira or Rajiv. He rarely called upon Sonia Gandhi, either, and in any case never took her counsel.

Apart from sustaining the process of economic liberalisation, Narasimha Rao was also responsible for our 'Look East' policy, where we balanced our traditional orientation towards Europe and America with the forging of closer ties with the rising nations of Southeast Asia. That policy has been furthered by the present government, again without reference to its originator.

From the point of view of the present Congress leadership, Rao's problem was not just that he was not a Nehru-Gandhi, it was also that as prime minister he did not genuflect enough to the Nehru-Gandhis. In the past, he had been content to silently (and perhaps slavishly) serve Indira Gandhi and Rajiv Gandhi. But when he unexpectedly became prime minister, he sought to break out of the shadows of the dynasty and become his own man. His speeches rarely invoked Indira or Rajiv. He rarely called upon Sonia Gandhi, either, and in any case never took her counsel.

Now that the Nehru-Gandhis once more control both party and government, P V Narasimha Rao has become the great unmentionable within Congress circles. I should modify that statement - Rao can be mentioned only if it is possible to disparage him. Thus his contributions to economic growth and to a more enlightened foreign policy are ignored, while his admittedly pusillanimous attitude towards the kar sevaks in Ayodhya is foregrounded. It appears that Sonia Gandhi has not forgiven Rao for setting aside decades of subservience to the First Family and asserting himself when he was prime minister. The message has gone down the line -thus senior ministers do not ever mention a prime minister they worked with and were sometimes indebted to. The party spokesmen, meanwhile, are free to charge him with crimes he may have committed, as well as with those he may not have committed.

Back in the days of the Soviet Union, there was something known as the 'Stalinist falsification of history'. When Joseph Stalin became general secretary of the Communist Party of the Soviet Union, he proceeded to purge the party and the government of opponents and critics, real, potential, or imaginary. These men (and less often, women) were first thrown out of their jobs, then sent to prison, and finally, executed. Among Stalin's victims were many authentic heroes of the Bolshevik Revolution, such as Leon Trotsky and Nikolai Bukharin. By the late 1930s, Stalin was verily Russia's Great and Unchallenged Dictator.

But he was not content with controlling the present - he wanted also to control the past. Under his direction, history books and encyclopaedias were rewritten to blacken out the names and contributions of Trotsky, Bukharin, and others. Photographs were also doctored - so, for example, Stalin was made to appear much closer to the founder of the revolution, V.I. Lenin, than he actually had been.

Our leaders are no Stalinists. They are far more confused and weak. Moreover, they operate within a democratic system. But where they do resemble Stalin is in their vanity and insecurity. They cannot purge or kill former colleagues, but they can at least disparage their contributions, while magnifying their own.

In this, its anniversary year, how will the Congress seek to write or re-write its own history? In the 125 years of its existence, the party has produced a series of impressive and important leaders. In the books, pamphlets or publicity materials brought out this year, how will these leaders be remembered and recalled? How much will the Congress worker of today be acquainted with the life and work of that remarkable Pune twosome, the liberal Gopal Krishna Gokhale and the radical Bal Gangadhar Tilak? Now that a woman is president of the party, will its historians and propagandists recall the great women leaders of the past, such as Sarojini Naidu, Kamaladevi Chattopadhyay, and Sucheta Kripalani?

And how will they remember those Congressmen who played a key role in nurturing the party during the freedom struggle but parted ways with the organization after Independence? Will, for example, such charismatic and greatly influential individuals as J.B. Kripalani, C. Rajagopalachari, Jayaprakash Narayan and Rammanohar Lohia be mentioned at all in the speeches and commemorations of this anniversary year? And how much space will the party's collective memory now find for its most outstanding president, K. Kamaraj, and its brilliant prime minister who died early, Lal Bahadur Shastri?

Indians are an unhistorical people. It may be that it is ignorance rather than malign intent which will lead to these (and other) names from the Congress's past being overlooked in the party's ongoing celebration of its very long life. But the treatment of Narasimha Rao by the party he once led is another matter. To forget his achievements, but to remember his mistakes, is a product of cold and deliberate calculation.