Any social scientist would give an arm and a leg to coin one new concept. M N Srinivas invented three such, with each resonating widely among the intellectual community, writes Ramachandra Guha
03 January 2009 -

I have been reading the collected essays of M N Srinivas, who in his lifetime was widely regarded as the country's foremost sociologist and social anthropologist. But public memory is short, and although Srinivas died less than a decade ago (in 1999, to be exact) he would now be a name unfamiliar even to most Indians who read or speak English. This is a pity, for perhaps no single scholar did more to illuminate the complexity of social life in modern India. His collected essays span a wide range of themes - from the social impact of science to Gandhi's religious ideas, from the history of anthropology to excursions in autobiography. There is a section apiece on caste and gender, two fundamental axes of social discrimination in India, to whose understanding Srinivas devoted much time and attention.

In this collection, and in other books that he wrote, M N Srinivas captured the various aspects of what I have elsewhere termed 'India's four revolutions' - the industrial revolution, the urban revolution, the national revolution, and the democratic revolution. In the India of the 20th century, an economy based almost wholly on agriculture and pastoralism was finding an increasing space for modern industry; a society based almost wholly on villages was coming into closer contact with city life; a territory once ruled over by Europeans was constituting itself as an independent nation-state; and a political culture that was once deferential and hierarchical was becoming more combative and participatory.

As a scholar, Srinivas was truly privileged to be living in India, and at this particular historical conjuncture. How much more boring it would have been for a sociologist to live, say, in Norway or Canada in the 20th century, in a placid, stable, orderly, and rather homogeneous modern society; or indeed, in the Indian subcontinent in the 17th century, when rulers fought and died but social life otherwise continued much as before? And as Indians, we are fortunate that we had, at hand, such a brilliant and incisive scholar to analyse these four revolutions. How much more impoverished our understanding of modern India would be if M N Srinivas had not lived or had perhaps chosen another profession?

Srinivas's essays combine empirical richness and analytical rigour, theoretical sophistication with elegant prose. The mind that conceived them is sharp as well as wide-ranging. The hand that penned them is sensitive to nuance and style. Srinivas practised what I like to think of as a 'grounded interdisciplinarity'. He was interested in economics, politics, history and literature, but came to those topics and disciplines from his own deep base in sociology and social anthropology. At the same time, Srinivas recognized the difference between sociology and journalism, between scholarship and common sense. His desire was to go beneath the surface of events to explore the structural and historical forces that shaped and reshaped these events. But he also paid attention to communicating the results of his enquiries in accessible prose. And he refused to take recourse to jargon. If he coined new words or terms, he made sure they aided understanding rather than obfuscating it.

Among the Indian social scientists of his generation, Srinivas was distinctive in saying important things, and saying them well. He was not a theorist who wrote in an abstracted language, nor a polemicist the passion of whose prose masked the superficiality of his research. His work uniquely combined analytical rigour with linguistic clarity. This has been rightly attributed to his preference for the 'field-view' to the 'book-view'. Unlike some other sociologists, Srinivas chose to understand a society on the basis of how its members lived and laboured (and fought), rather than on the basis of printed texts that purported to capture its principles or 'essence'.

On looking back at his life and career, I think that another reason that Srinivas wrote so insightfully about modern India was that he was always, in some sense, an outsider. He was born and raised in Mysore, where he was a Tamil living among Kannadigas. He then took a PhD in Bombay, where he was a Kannada speaker among Maharashtrians and Gujaratis. He later did another doctorate at Oxford, where he was a brown among whites, an Indian among Englishmen. After his return to India, he taught at universities in Baroda and Delhi, where he would have been seen as a south Indian among north Indians. In between his degree and his jobs he undertook long spells of fieldwork in southern Karnataka, where he was a townsman among rural folk. In all these situations, because he could not take the culture or language for granted, he captured aspects of its working that eluded the unselfconscious and unthinking insider. 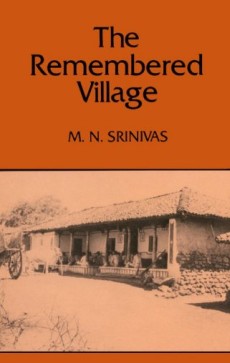 Among the Indian social scientists of his generation, Srinivas was distinctive in saying important things, and saying them well.

Srinivas's brilliant and fertile mind gave birth to three new concepts. The first, which he termed 'Sanskritization', referred to the practice among the lower castes of adopting manners of speech, dress, and ritual practice normally identified with the upper castes, and especially the Brahmins.

The second concept, 'dominant caste', referred to the fact that in most parts of India, village life was dominated by a particular community. Jats in Haryana, Marathas in Maharashtra, Vokkaligas in southern Karnataka, Lingayats in northern Karnataka - each of these was the 'dominant caste' in its region. This dominance, argued Srinivas, was a consequence of the fact that these castes were quite numerous, were placed fairly high in the ritual hierarchy, and owned much of the land (the most valuable resource in rural India). These three attributes had to come together - without the numbers, or if they were placed at the bottom of the social ladder, no landed caste would be 'dominant' in the village.

The third concept invented by Srinivas is ubiquitously used by this newspaper - and many others - although those who use it do not acknowledge or perhaps even know of the inventor. This is the idea of the 'vote-bank'. Srinivas coined the term to refer to the ability of a powerful village leader to deliver to a provincial politican all the votes of his village or caste. Later, it came to connote the more general tendency of individuals to vote in herds or groups, whether these herds or groups were defined in terms of caste, class, language or religion or even a shared leisure-time activity (as in the famous, or perhaps notorious, 'vote-bank' of rifle-owning hunters in America).

Any social scientist would give an arm and a leg to coin one new concept. Srinivas invented three such, with each resonating widely among the intellectual community. And each illuminated and encapsulated a crucial aspect of social life and social organization. It may be that, with the (perhaps inevitable and necessary) delegitimization of Brahminical ideals, 'Sanskritization' is no longer as useful in understanding Indian social reality as it once was. But through much of the 20th century it certainly was. In any case, 'dominant caste' is still indispensable as an analytical device to explain how village politics works across much of the country. As for 'vote-bank', it is a term whose relevance is not restricted to India alone.

One reason that M N Srinivas is not as well known as he should have been is that he never attached himself to intellectual factions or fashions. He was not a Marxist, a subalternist, a feminist, or any other kind of 'ist'. Where other Indian intellectuals paraded the progressiveness of their political views, he was content merely to more deeply understand his own society. And what a fine job he did of this, too. I do hope his work finds a new audience, not just among younger scholars but among the general public as well. His insights into the dynamics of India's four, great, unfinished revolutions remain of abiding interest.