The lipstick and the burkha

Inspired by a recently released movie, Shoma Chatterji explores how the lipstick and burkha establishes a woman’s identity in public spaces and liberates them in private.
19 August 2017 -

The film Lipstick Under My Burkha (2017) has become a sleeper hit in most Indian cities. Never mind the tussle with the censors, the film was released with some minor cuts which the producer and director did not object to lest the film’s release be postponed, toppling the balance chart of the distribution and exhibition of the film in theatres.

This is not about this film per se but is more about how the film has opened a veritable Pandora’s Box of the hidden agendas women can slide under with the help of these two different items of feminine adornment stripped of their cultural and religious references.

Lipstick has become one of the most widely used cosmetics since Cleopatra first stained her lips with carmine in 69 B.C. "Even women who don't wear makeup wear lipstick," write Meg Cohen Ragas and Karen Kozlowski in Read My Lips: A Cultural History of Lipstick. Often referred to as hope in a tube, lipstick has captivated women (and men) since the earliest rosy stains forever linked lipstick and women's lips with femininity and sexuality. 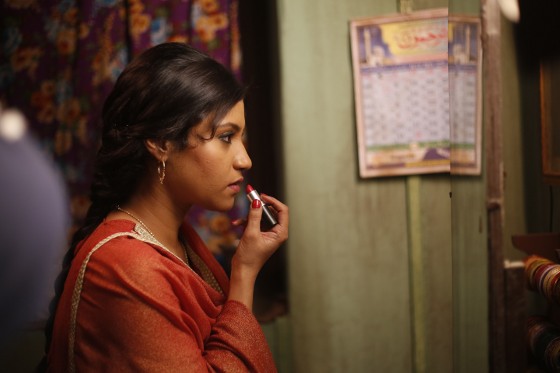 A scene from movie Lipstick Under My Burkha. Pic: Shoma Chatterji

A look at representations in fiction, film, and memoirs reveals that putting on lipstick did not necessarily ensure that women longed to submit to pre-war behaviour. In some texts of the period, lipstick became a code word for gendered ingenuity and perseverance, even if makeup itself was not discussed.

Around 40 years back, parents of an Indian girl would decide on whether the growing girl should or should not wear lipstick. After marriage, if her husband or his family were more conservative than her parents, she would have to deconstruct herself in terms of dress and follow the dress code for women within the marital home.

In Satyajit Ray’s Mahanagar (1963), Arati’s husband Subroto does not take kindly to the fact that his wife used lipstick clandestinely. He finds the offending stick of red inside her purse when she asks him to take some cash out of it. She looks at his face and throws the stick outside the window.

Was it an expression of anger? Or was it a sign of submission? Difficult to tell. Did he have the right to open her purse even on her say-so? No one has an answer. The lipstick in the film carries a symbolic value for the strange and sweet bonding between two women distanced by race, culture, language, dress, yet bound to each other by that lowest common denominator called friendship standing independent of their other relationships within the office and out of it.  The stick of lipstick signifies Arati’s metamorphosis from a timid, diffident, tradition-bound, Bengali housewife to a reasonably smart, confident, working woman of Calcutta.

Lipstick is not just a cosmetic used to massage the woman’s beauty ego. It is an aggressive statement, a mark of identity, a weapon of defense and a beauty accessory. It establishes the identity of the woman in public space. In Mahanagar, the lipstick, along with the mirror and the purse, function as strong signifiers of the changing face of femininity among the Bengali middle-class in Calcutta, especially within the time, place and social structure Arati belongs to. Ray's visual conception is so economical that a mirror and a stick of lipstick become objects that acquire emotional, cultural and political resonance. 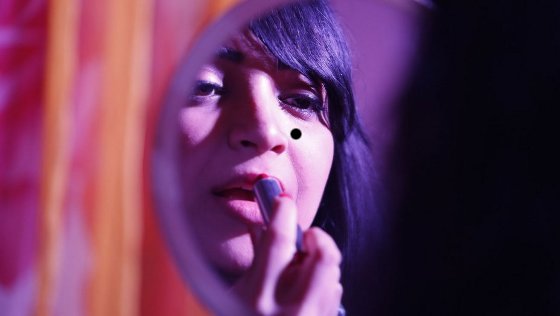 A still from Lipstick Under My Burkha. Pic: Shoma Chatterji

In Lipstick Under My Burkha, the four women of different ages, coming from different backgrounds, marital status and educational status, are metaphors for lipstick as an expression of self-assertion and liberation from patriarchal controls they wish to defy but since they cannot do it publicly, they do it under the safety of the burkha, also metaphorical for two of the four women and real for the other two who are Muslim. The communal faith of the women is not important.

Interestingly, the Quran does not lay down any particular form of clothing for men or even for women. It does not require Muslim women to cover their faces completely and remain confined within the four walls of their homes. The Quran talks about the need for both men and women to dress modestly. “Modest appearance” means that erogenous parts of the body should be covered suitably. This modest dress or hijab, meant both for men and women, has been historically understood in diverse ways among different Muslim communities.

The “Hindu” version of the burkha is the ghunghat, that still dominates the lives of all women in Bihar, Uttar Pradesh, Gujarat and Rajasthan.

In Bengal in the 19th Century, the veil or the ghomtaa bestowed enforced invisibility on married women. They had to cover their heads with the ends of the sari if they were married, irrespective of age and position which no woman was permitted to shed in the presence of any elder, man or woman, including the husband and son-in-law, never mind the time of day, place or occasion.  Any looseness with the ghomtaa was strongly censured by elder females in the family. Widows wore the ghomtaa too, but could go a bit easy on it, as they grew older. Little married girls who lived in their parents’ home waiting for puberty, moved around freely without the ghomtaa because they were too small to understand the significance of this custom. The ghomtaa hid the face of the girl/woman, thus, keeping her face beyond visibility for one and all. The husband hardly knew what the wife looked like because the only time he saw her was at night when it was pitch dark and the earthen lamps and other sources of light had been put out. 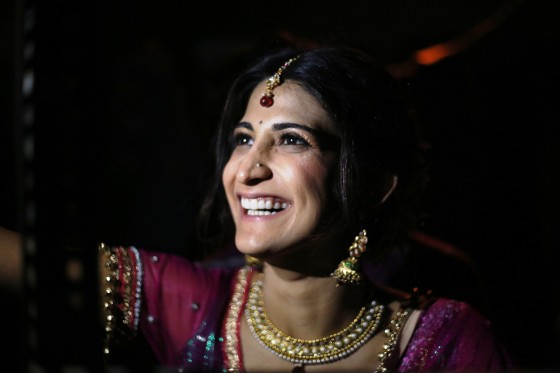 A scene from Lipstick Under My Burkha. Pic: Shoma Chatterji

The ghunghat, however, has another edge to it. It gave women the only opportunity to express their emotions through facial gestures others could not see. They could frown, smile, tease, grimace, stick their tongues out and even laugh silently under the cover of the ghunghat and no one would know. A reprimand, an insult, could go unpunished because they were invisible. They could even take voyeuristic delight by sneaking peeks at their husbands and other men in the family without anyone knowing. On the other hand, she could shed silent tears of pain, of suffering, of helplessness, of loss because loud wailing was not permitted except when someone passed away.  Weeping in front of others was not permitted.

Lipstick Under My Burkha indicates that all women are forced to lead double lives – one for the public domain and one in private which is actually an expression of their self-will and their way of living life on their own terms. It is sometimes tough to reconcile these two lives as the film’s climax shows. But the women manage to circumvent all this cleverly without their families knowing about their other lives where beneath the burkha, real and metaphorical; they freely wear the lipstick which may take the form of voluntary sex engaged in by one of the young women having a torrid affair with a Muslim boy who tires of her lust for sex. Or, it may be as a clandestine  but very successful career in marketing and sales by a young Muslim wife who is brutally raped by her unemployed husband every night. Or, like the elderly lady, engage in verbal pornography with a young hulk over the phone and so on. The young Muslim girl who is forced to wear the burkha to college, slips out of it in the college’s restroom to reveal tight jeans and a fashionable tee, applies a bright red lipstick and joins the college fraternity raising its voice against the stopping of jeans in college!

Lipstick Under My Burkha is a very powerful film because it carries multiple layers of rebellion among middle-class women, Bhopal being a microcosm of an India we really do not read  or know much about.

The most sharply incisive comment on woman’s rebellion in this film comes across in one poster that shows the back of a woman’s palm with the fingers spread out and the middle finger transformed into an open lipstick with the tip pointing up!