Will the Blue Lady do a Le Clemenceau?

Despite the confirmed presence of toxic waste on-board the Blue Lady, currently beached at the Alang shipbreaking yard, there appears to be a consensus among key officials in Gujarat and New Delhi to allow the ship's dismantling. 19 February at the Supreme Court will be yet another litmus test, writes Gopal Krishna.
17 February 2007 -

On 19 February, the Supreme Court of India will hear the matter of the toxic ship Blue Lady, beached at the Alang port, Gujarat. It will use the final report of its Technical Committee on Shipbreaking during the hearing, to make a decision on whether the Blue Lady must be sent back, or allowed to be dismantled. 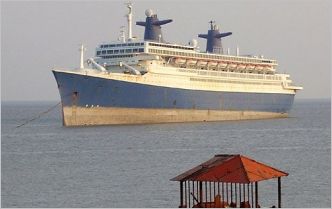 As reported last year, the 315-metre long and 46,000-tonne, 11-storey Blue Lady (formerly S S Norway) left the port of Malaysia for Dubai for 'repairs' in May 2006 and later sailed towards Alang, Gujarat, for shipbreaking. According to the then ship's owner (and breaker) Rajiv Reniwal of Haryana Ship Demolitions Pvt. Ltd., the ship contains 1240 MT of asbestos containing materials (ACM), and also polychlorinated biphenyls (PCBs), a neurotoxin. But the ship carries neither documents required as per international law, nor a complete inventory of its hazardous wastes. I had filed an application last year in the Supreme Court asking the court to ensure that the ship complied with international law, national law and the court's own order of 2003 on import of hazardous wastes.

In response to arguments from the government that the ship and its crew would be stranded in the monsoons, the apex court had allowed the Blue Lady to anchor off Alang on 'humanitarian grounds', and did not permit beaching and dismantling.

The events that have unfolded since then are indicative of a consensus among officials in state and central governments to allow the illegal beaching and dismantling of the ship. Despite the confirmed presence of toxic waste on-board, and the ship's owners not submitting the requisite documents as per Indian and international law, the ship was allowed to beach at Alang on 15 August 2006. What happened?

Allowing the ship in any cost

First, even after permission to anchor the ship in territorial waters off Alang port was granted by the Ministry of Environment and Forests (MoEF) in June 2006, the ship surprisingly turned around. It was towed for docking at Fujairah at the United Arab Emirates (UAE) for two days before again being towed back to the edge of Indian territorial waters. At the end of June last year, the ship anchored 35 nautical miles away from Alang at Pipavav Port.

In the meantime, the Supreme Court's Technical Committee looking into the matter has said in its report: "For obtaining beaching permission, the recycler has to submit documents as per Annexure 1 of the GMB (Gujarat Maritime Board) Notification dated 5th July, 2003." (These are documents relating to the ship, required by law.) But separately, on 1 August 2006, M Subba Rao, an Additional Director at the MoEF (not a member of the Technical Committee), wrote to the GMB asking it to proceed further for according the beaching permission to Blue Lady.

And by then, the ship had changed owners! Haryana Ship Demolitions Ltd. sold the ship to Priya Blue Shipping Ltd. for 16 million US dollars, reported the Business Standard. The ship itself remained anchored off Alang.

Not soon after, on 3 August, the GMB's port officer A K Rathore sent a letter to the ship's new owners Priya Blue requiring documents from Priya Blue as a condition to beaching. Records show that Priya Blue did not fulfil those conditions. And yet, on 15 August 2006, the Blue Lady moved in and beached at Alang, approximately 4000 feet away from the shore. Port officer Rathore had gone ahead and permitted the ship to beach. It appears this happened with the approval of Subba Rao at New Delhi/MoEF.

Not all quarters in government were happy with the ship being let in, especially with the sudden change of ownership. The Parliamentary Standing Committee on Science and Technology, Environment and Forests, had raised questions on the permissibility of Blue Lady. In response, M Subba Rao, wrote on 15 September to P G Narayanan, Chairman of the standing committee. Rao stated, "The beaching permission given by the Technical Committee was for the ship 'Blue Lady'. There is no mention of the name of any owner of the ship in our communication dated 1.8.2006." In other words, Rao was arguing that the permission was given the ship, not to its owners!

Also, in a separate development, Gopal Subramaniam, the Additional Solicitor General advised the Technical Committee to go ahead and recommend breaking of the ship, according to minutes of proceedings at the committee.

On 4 December 2006, Justices Arijit Pasayat and S H Kapadia at the Supreme Court took note of the impermissibility of the entry of the ship. They asked Gujarat Pollution Control Board (GPCB) to "find out if there is any scope for sending back the vessel after beaching." They also wrote that the petitioner would be permitted to place his objection before the GPCB. Sanjay Parikh, counsel for the case, informed the GPCB on 26 December that if the Blue Lady was broken up, it would be in complete violation of the law.

Following our presentation before the GPCB, in the face of incontrovertible proof of dereliction of duty by the concerned officials in letting in the ship, Sanjiv Tyagi, Member Secretary, GPCB said, "we did not know this 'lady' would give us so much pain". Gujarat Maritime Board (GMB) official Atul Sharma gasped for words when Tyagi and K D Choudhary, a member of the Technical Committee confronted him with the letter of 3 August sent by their colleague A K Rathore, which Rathore himself violated in letting the ship in. On condition of anonymity, a GMB official revealed that junior GMB officers were under tremendous pressure from a senior Union Environment Ministry official to act the way they did.

The law, for what it is worth

The 2003 Judgment of the Supreme Court on the importing of hazardous wastes was based on the report of the M G K Menon Committee, the High Powered Committee on Hazardous Wastes. The committee had noted that the ships were broken in India in a totally environmentally unsound way and that the working conditions of the workmen were appalling. It recommended that ships destined for ship-breaking on India's coast ought to be decontaminated at source.

The Supreme Court, after considering the Menon Committee report, gave detailed directions making it mandatory for:

Further, the Hazardous Wastes Rules of 2003 completely ban the import of waste asbestos and wastes containing PCBs/PCTs. The obligation under the Stockholm Convention on Persistent Organic Pollutants which India has ratified is to prohibit entry of wastes containing PCBs, because it cannot be managed in an environmentally sound manner at present. There is no facility in India that is capable of meeting the requirements set under the Stockholm Convention.

All of these conditions have been violated in the beaching permission of the Blue Lady. The ship did not submit any document seeking permission for ship breaking. No such document has been either processed as per the provisions of law or directions of the Supreme Court. India has had no prior official information about this ship seeking entry in our territorial waters, none for the purpose of ship-breaking. The ship entered in the territorial waters on humanitarian grounds.

Reacting to the developments of last year, Professor Menon, presently the Dr Vikram Sarabhai Distinguished Professor of the Indian Space Research Organisation, wrote to the Chief Justice of India on 14 August 2006. He stated that "any effort to dilute the Supreme Court orders of 14 October 2003 to try to remove the concept of prior decontamination would be a measure going against the interests of workers in the ship-breaking yards as also the violation of the Basel Convention." He also noted that would be a violation by both Malaysia and India who are signatories to the Convention.

Cutting across party lines, select politicians had also raised questions on the action of Indian environmental authorities last year. Basudev Acharya, senior parliamentarian and leader of the Communist Party of India (Marxist) presented a petition in the Lok Sabha on 25 August 2006 requesting to enquire about the role of authorities in permitting the entry of the Blue Lady. Earlier on 17 May 2006, Kalraj Mishra, Member of Parliament (BJP) demanded in the the Rajya Sabha that the "Government to stop this toxicated (sic) ship to enter the territory of India and to formulate a ship breaking policy keeping in view the environmental aspect."

The original hoodwinking: Germany and Norway

Norwegian Cruise Lines (NCL), the ship's owner ensured its departure from the port of Bremerhaven, Germany on 23 May 2005 by misinforming the German authorities. This is a criminal offense in Germany and has dragged Germany and India into becoming participants in violating international law. Recently uncovered evidence confirms that as far back as 2004, Norwegian Cruise Lines (NCL) and its mother company, Star Cruises Ltd (SCL), misled Germany by declaring that the vessel was going to Asia for re-use. The same happened in Malaysia, which is when the Blue Lady's India-saga began.

Environmental, labour and human rights groups have strongly recommended that Norwegian Cruise Lines and Star Cruises Ltd. must be held accountable by instituting criminal and civil actions against them for illegally exporting Blue Lady by misrepresentation to German authorities, and for any harm that will arise by their willful disposal of the toxic wastes left on board.

Efforts are on in Germany to take Star Cruise Ltd. to task for its act. The NGO Platform on Ship breaking based in Brussels is seeking recall of the ship asking the German authorities to hold Star Cruises accountable. It has further called upon Germany, the exporting state, to comply with its Basel Convention obligations and re-call the vessel but German authorities have not acted so far. The European Commission has asked Germany and India to explain their respective positions with regard to the Blue Lady.

It may be noted that a German inspection team had earlier confirmed the presence of airborne asbestos in several decks of the Blue Lady along with other toxins such as PCBs, Cadmium, Azocolourants, Chromium compounds, Mercury compounds, Polybrominated Diphenyl Ethers (PBDE), Polybrominated Biphenyls (PBB's), Tributyls, Heavy Metals and other hazardous substances.

What is ironic, and indicative of the malaise that ails the Indian environmental bureaucracy is the statement by the new purchaser Priya Blue on its in website: "Western countries have very high standards of safety which calls for costly measures for ensuring safety. Hence, ship-breaking industry has been diverted from western countries to India"

Ball in the Supreme Court

The Blue Lady's worth of 16 million dollars as scrap is less than it would cost to remove the asbestos, if international and Indian environmental regulations were followed. The Supreme Court is aware of the fact that the Alang shipyard does not have the facility to deal with hazardous wastes and related substances, and that this endangers the occupational health and safety of the casual and contract workers.

The final report of the Technical Committee and the GPCB has been submitted to the Supreme Court. The matter rests now with the apex court.

Gopal Krishna is a petitioner in the Blue Lady case at the Supreme court. He is with the Centre for Social Medicine and Community Health, Jawaharlal Nehru University. He is also associated with Indian Platform on Ship breaking, and the Ban Asbestos Network of India (BANI).