Can you really empower me?

Only when we think of providing the basic necessities to the millions of poor women around India will empowerment mean anything for them, writes R Balasubramaniam.
01 January 2011 -

It was early 1992. We were just toying with the idea of getting the local women organised into small groups. The intent then was to just get them together to talk about issues that were important for them. Later on, in 1993, after Mamatha had joined us at Swami Vivekananda Youth Movement, we expanded the agenda to include micro-credit and savings.

Women in Brahmagiri would usually get together every Monday and meet for an hour or so. I had no exposure to any of the issues that concerned them, so I would just use the opportunity to stay connected and talk. The topics of discussion usually revolved around their health, their children, their husband's drunkenness, or the problems they faced with the forest department. Many times, these were just occasions for some local gossip. I would always try my best to attend all these meetings, and they were possibly my best learning experiences.

The group was dominated by the presence of three very vocal Kadukuruba women - Selli, Sarasu and Somi. Shivamma, another Kadukuruba lady would attend but not speak much in the initial days.

We must have been meeting regularly for nearly 6 months, when I started noticing that Shivamma was conspicuous by her absence. When you have only one group to work with and just 15-16 members attending, one does notice who is present and who is not. Shivamma was not present for more than 4 weeks in a row, and her absenteeism became the subject of discussion. The women were quite vocal in criticising her for this, and saw no reason why she was not coming. 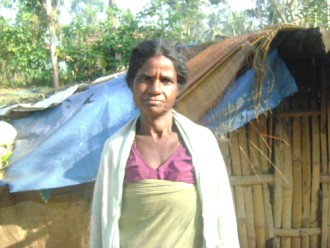 "Empowerment is not just weekly meetings and discussions; not just about laws, demanding rights and entitlements. For a woman, it is also about providing the physical, emotional and the intellectual space and freedom for allowing all these things to happen in a conducive environment."

All of them seemed to agree that they all faced similar problems and attending these meetings did not come without a price for each of them. Finally, they felt that I needed to intervene and talk to her and her family and convince her that her presence was as important as her support in spirit.

A few days later, Shivamma came to the hospital with her youngest child who was sick. All her three boys attended our school, and Ganesha, her oldest was part of our first batch of 28 students. I met her just as she was returning home, and spoke to her about why she was now distancing herself from the Sangha. I explained to her how 'empowerment' meant certain sacrifices had to be made, and coming together was more than symbolic. I tried telling her that only through dialogue and discussion could each of us understand the problems on hand and think through a workable solution. More importantly, the collective could thrive only on the strength of its members, and the group needed every member's presence to make it work.

She gave me a patient hearing and casually mentioned that I would never understand her position. She told me it was possibly much easier for me to attend these weekly meetings than it was for her. Seeing my puzzled look, she politely challenged me to spend a day with her and her family and then decide if she could attend these meetings. This was the first time that someone was testing my commitment and asking me to experience first-hand the issues that the community faced each day. I took up the gauntlet and decided that I would spend the whole of the next day shadowing her.

What an experience it was! I walked up to her house early in the morning at around 6 AM. Her day had just begun, and she was up and waking her family.

She spent the two or three hours fetching water from the tube well nearby, and must have made at least 10 trips. Then she quickly gathered up some firewood and lit the hearth. The morning breakfast was the left-over dinner from the previous evening - ragi balls with 'chutney' made of chilies and onions. She seemed to be constantly busy with fetching water, cooking and getting her family ready for their day.

Once she made sure that all her 3 children were ready and off to school, she and her husband walked to the forest nearby. Here they spent most of the morning fetching firewood and bamboo. The Kadukuruba's life revolves around bamboo - they use it from cooking to house construction to making small articles of daily use. She returned early with a head load of dry firewood and was happy that she could find fallen and dead wood that would keep the fires lit for the next 2-3 days. Her husband returned a couple of hours later with enough bamboo for them to work on for the next few days.

Before I could even say 'rest', she was off to the Kabini river - to wash clothes and bathe. After her return, she and her husband sat together and started splitting the bamboo and making them into strips that they could work on. As they worked, they also chatted and seemed to enjoy each other's company. I realized that amidst all this activity, there was no lunch thrown in. Being hungry myself, I could not but help notice that they did not seemed to be troubled at all. Their entire life revolved around ragi balls in the night and the same thing for breakfast in the morning, and that was it.

It was now around 5 PM, and the children were back from school. This was the indication for her to start preparations for dinner. From chopping the firewood, to cleaning the utensils, to fetching water to preparing dinner - she seemed to be fully immersed in these activities. Before I could even have a decent conversation with her, I realised that it was nightfall and the day had ended. Amidst all this, she still maintained her calm, and was always cheerful.

I was tired and wanted to desperately hit the bed. She would not let me go so easily. After the dinner that she served lovingly, she politely asked me if I understood why she could not attend the Sangha meetings.

I could now see, what seemed such an ordinary task of making an hour for meeting each week was indeed so demanding and expensive for these women. There are things that we take for granted, and presume communities will oblige us in doing. I had seen the Sangha from my point of view - as a tool for empowerment, and did not stop to ask myself what it could mean to these tribal women without whose participation the Sanghas meant nothing. It was not just an issue of time and intent. There are deeper dynamics that determine the process. I could now see all these women through a new lens and my respect and admiration for them went up many fold.

Shivamma then politely told me something that rings in my ears even now. She told me that empowerment was not just weekly meetings and discussions; it was not just about laws, demanding our rights, and seeking out our entitlements. She said for a woman, it was also about providing the physical, emotional and the intellectual space and freedom for allowing all these things to happen in a conducive environment. She said this in her own simple way.

It was about ensuring that she had piped water at her house, fuel that did not demand going to the forest each day and spending hours chopping it; an livelihood with a steady income and finally the security that a good school and hospital that is accessible, affordable and available to her and her family. Only when all this happens, she felt that she would have the time and the freedom to fully and effectively participate in the Sanghas. And only when we think of providing these basic necessities to the millions of Shivammas around India will empowerment mean anything for them.