The employment guarantee in rural areas is having multiple and layered effects. With better wages, the bargaining power of the weakest has gone up a notch. P Sainath reports.
13 July 2008 -

"Why can't they keep the schools open during summer," asks P. Somamma in Mosangi. A strange question, with the mercury blazing past 43 Celsius in the Nalgonda village and all of us cowering in the little shade we can find.

"Why would you want to send the kids to school in this heat, Somamma?"

"At least there," she says, "they got one decent meal a day. I can't afford to give them one now, during the vacation."

In Kondapur in Mahbubnagar district, Bharatamma echoes that demand. "When the schools are closed, there is no mid-day meal. That means, instead of getting to eat, the children go to work. How else does the family manage?" Hit by rising food prices, poor families can't afford one more meal. For those with two children in school, the costs really go up. When the schools are open, you can find some young ones saving a part of their meal for a hungry grandparent at home.

Back in Mosangi, Somamma's son Bikshapati says he preferred the mid-day meal at school to food at home. "It was better," he says. "We got dal, rice, tomatoes, rasam, even eggs." Much of that is beyond his family's reach now. If he and his family are able to pull on at all, it's because of the work the National Rural Employment Guarantee Act brings to their village. In Mosangi, there is bitterness over how it has worked. In Kondapur, where it has done better, there are some complaints. Yet, in the eyes of all them, this is the most important programme the countryside has seen in years.

There are complaints of rip-offs. "We've been paid only Rs.30 a day," says an angry P. Mallamma in Mosangi. The record says they got Rs.84 a day. K. Kalamma says she has "worked for over a month, without being paid." Even a former deputy sarpanch, Saiddulu, has not been paid for a week's work. He is well over 60 - yet another older person returning to work, driven by food costs. But he is clear that the work the NREGA brings is "very vital to us. It should run well, that's all."

Three major issues confront a programme that is the lifeline of these communities at this time. Two of these are built into it. "Why only 100 days of work," ask people. And they do not get those 100 days fully. The second is the rule of only one member per family being able to use it. In Andhra Pradesh, very sensibly, field assistants at NREG sites are breaking that rule. It is possible to see husband and wife together at the same site. That's as far as it goes, though.

Poor families see themselves as a collective. "One family member cannot go to Guntur to work and another to the site," says Lashkar in Lambapur village. Splitting up is bad economics. A day's wage at a brick kiln might be less than what it is for NREG work. But though brick kilns are brutal and exploitative, all members of a family can work there - and for more than a hundred days. These two restrictions hobble a programme people say they badly need.

•  They lock on to the NREGA
•  NREGA hits buses to Mumbai

Third are the usual local problems. Payment delays for one. Though Andhra Pradesh seems to be ahead of several other States, this remains a problem. "People here have waited four months to get much less than what was owed to them," says Mallamma. "People are recorded as working when they did not work. Others are not recorded as working when they did," says B. Ramaiah in Vadlaparthi village of Nalgonda.

Lambapur in the same district throws up this kind of paradox. This is a village where NREG work has dramatically curbed migrations. There is no one who will tell you things have not improved. Yet, most "passbooks" show zero days of work. This is an adivasi 'tanda' with very low literacy and education. The records are a mess and a formal audit would conclude there has been a disaster. But Lambapur has done well out of the NREGA. To make it more complex, the reverse could be true in Mosangi. The records would show Mosangi has done better, which it has not. Everywhere is the backlash from the old contractor-local official-low bureaucracy that feels threatened by the NREGA. Capturing the records and the process is part of the fightback. In at least two other States, activists promoting the NREGA have been killed.

Yet Andhra Pradesh has fared better, thanks to the growing awareness of people of their rights. Even at the start, 2.7 million people applied for job cards in the first month after the programme was announced. From top officials in the State's NREGA team to unions of landless labourers, many have worked hard to promote the programme

In this process, a small but vital reordering of power relations is under way. The NREGA is having multiple and layered effects. With better wages, the bargaining power of the weakest has gone up a notch. For some, their access to costly services like health has risen slightly. NREG work has been a lifejacket in the flood waters of the price rise. And no other programme has had the positive impact on distress migrations that it has achieved. 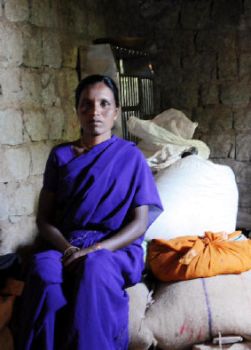 Lakshmamma hopes the NREG work will continue. But she's up against a powerful combine of forces entrenched in the countryside and ensconced in Delhi's power elite. (Picture by P Sainath)

"It is not just low level officials," laughs a very senior official in Delhi. "There is hostility right here at top levels of bureaucracy and politicians. There are efforts on to make it less attractive to people needing work. Complaints that the NREGA is raising wages and hurting farmers are being used to push for limiting that wage. And making even those 100 days of work harder to access. This would be disastrous. But it seems certain such efforts will soon follow."

"Of course, there is much scope for improvement," he says. "You could get people to participate more in choosing the kind of works needed locally. We could provide better technical support and advice. Restrictions on the number of days and family members could be sorted out by making it more universal." And by aligning it to works that benefit the whole community, including local farmers, some of those other problems could also be met.

In Tatikolu village, Lakshmamma hopes the programme will continue. She is up against a powerful combine of forces entrenched in the countryside and ensconced in Delhi's power elite. A widow with young children, she finds it hard to get work at the site to begin with. Seated in her bleak home, she wonders when her food supply will run out. And hopes the NREG work won't. "Without it, I don't know what we would do."