The way we used to eat

The government distributes rice and wheat to tribals through the PDS, unmindful of their diet and its cultural links. This gives them food security, but takes away their autonomous lives, writes R Balasubramaniam.
15 April 2011 -

There is so much of talk about food price inflation, and serious concerns are expressed regarding the food security of the poor. On one side, we have nearly 60 million metric tonnes of food grains rotting in the open in India. On the other hand, we have 645 million people with less than 2400 calories to eat each day. While one is deeply disturbed by these contradictions, one also feels sad at the state of our Public Distribution System.

India has the largest public distribution of subsidized food grains in the world. It has a network of nearly 500,000 Fair Price Shops (FPS) that distribute more than Rs.15,000 crores worth of rations to 160 million households. The food subsidy bill for 2006-07 for the Government of India was Rs.242 billion. Thirty six million tonnes of grain were procured that year, and 31.6 million tonnes distributed through the Fair Price Shops.

Looking at these figures, one feels both disturbed and confused. Confused that we are doing so much but have so little to show; angry and disturbed at the enormous leakages and corruption that has seeped into this system. The 2005 Planning Commission report says that 57 per cent of the PDS food grain does not reach the intended people. For every Rs.4 spent on the PDS, only Re.1 reaches the poor.

As I look back and think on how this must be affecting the millions of the 'real' poor, my mind is drawn to Basavi, a Jenukuruba tribal who lived in Hosahalli with her husband Jadiya and three children. Since the family lived close to our Hosahalli campus, I would meet and interact with her frequently. This was in the early 1990s, and Swami Vivekananda Youth Movement (SVYM) were just then building a school there.

It was the post-monsoon season and nature was very generous that year. There were pumpkins and cucumbers all over the place and people were expecting a rich harvest (provided the elephants did not interfere). Basavi also had her share of these vines and would invite me to her modest hut to share a meal. Unabashedly, I would accept her invitation and sit with her family, making small talk and learning about their culture and history. 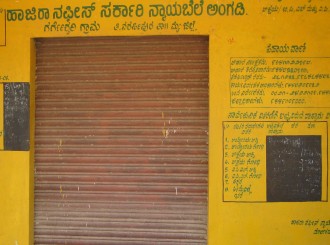 Their Antyodaya card entitles families like Basavi's to 29 kg of rice at Rs.3 and 6 kg of wheat at Rs.2 from the PDS shop each month. But as far as their dietary history goes, the shop is effectively closed, and they cannot figure out why the government insists on giving him only rice and wheat.

•  Can I build my own house?
•  Will I get my firewood?
•  Cash transfers and insecurity

Meals on most days were ragi balls and a sambar of pumpkin leaves. Whenever she harvested a ripe pumpkin, she would make a small hole in it and fill it with chutney made up of onion, chilies, garlic and the other spices that she could afford. She would then gently barbecue it till the peal turned a brownish hue. These mouthwatering pumpkin slices are something I can never forget. This used to be the meal on most days. Jadiya would occasionally bring in honey with the entire comb. They would crush the comb, pupae, larvae, bees, wax and the honey and eat this tasty concoction as dessert. There was so much joy and plenty of pumpkins to go around. They never felt hungry or wanting.

Thinking about this now makes me wonder what exactly 'food security' is about. Is it merely the provision of the requisite calories and nutrition? Or is it something more psychological that makes a person feel satisfied, contented, and happy with what she is eating?

Basavi's family never felt poor or denied of food. She always felt that she had enough and more to share. But this was something that I had not got my mind wrapped around in those days. I felt horrified that they had to eat this day after day, and felt obliged to do something about it. I could never understand that food security was also about culture, lifestyle and attitude towards life itself. It is not merely the presence of food in a quantity and quality sufficient for a family and its daily satiety and nutritional needs.

Over the next few years, we got her family a small portion of land where they started growing ragi and tapioca. This met all their needs and they now graduated from pumpkins to more structured meals. They also became dependent on the rain gods, and were now at the mercy of the elephants. Staying guard against these marauding animals, Jadiya's family lost many months of their sleep. Peer pressure and our own limited understanding of the situation encouraged Jadiya to move into more ambitious crops like cotton and ginger.

He now had more money. But this did not naturally translate into more food. It meant more alcohol and money spent on wasteful expenses. It also meant that he became more dependent on the Fair Price Shop and was at the mercy of the State for food grains. More damagingly, he changed his food habits to start eating rice and gave up on ragi. Being a Jenukuruba, he now carries an Antyodaya card, which entitles him to 29 kg of rice at Rs.3 and 6 kg of wheat at Rs.2 from the shop each month. He has never figured out why the government insists on giving him only rice and wheat. It was easier for him to change his food habits and begin making chapathis at home rather than negotiate with an insensitive state and demand ragi instead.

Most development activists would now feel happy and comfortable that poor Jenukuruba families like Jadiya's are food secure. But Basavi disagrees. She still longs for the days when nature gave her what she desired, in plenty. She not only had enough for her family but plenty to share with people like me too. She was happy and contented with the fact that day after day, there would be something to eat. More than anything, she was independent and lived a culinary lifestyle that generations of tribals were used to. Today, she has acculturated into eating cereals that she doesn't really like, and all this in the name of sood security!

The Union Government recently announced that it is considering direct cash transfers to the poor, as an alternate to the current subsidy programs. There are fears that this would dilute the protection the government offers to the poor, but there is an evident upside too. Cash transfers could restore the autonomy of people like Basavi, giving them the freedom to choose not only what they want to buy, but also where they want to buy it from.

Until that happens, however, Basavi can only dream and reminisce about the way she once ate - and lived.